Norway condemns ‘ridiculous’ €1,500 fine for their women’s beach handball team after punishment for wearing shorts instead of bikini bottoms is confirmed

Norway’s women’s beach handball team has been fined after the players refused to wear bikini bottoms in a match, instead competing in non-regulation shorts.

The fine comes after they wore shorts – instead of the bikini bottoms required by the International Handball Federation’s (IHF) rules – in their bronze-medal match loss to Spain at the European Beach Handball Championship in Bulgaria on Sunday.

Norwegian officials reacted angrily to the news on Tuesday.

‘It’s completely ridiculous,’ Norway’s Minister for Culture and Sports, Abid Raja, tweeted after Monday’s ruling. ‘What a change of attitude is needed in the macho and conservative international world of sport.’

Eirik Sordahl, the president of the Norwegian Volleyball Federation, told national news agency NTB: ‘In 2021, it shouldn’t even be an issue.’

Norway’s beach handball team has been fined after the players refused to wear bikini bottoms in a match, instead competing in non-regulation shorts (pictured)

Before the sanction, the Norwegian handball federation said on Monday it was ready to pay the fine after the women’s team knowingly defied official regulations.

‘Of course we would pay any fine,’ Norwegian Handball Federation president Kare Geir Lio told AFP news agency on Monday. ‘We are all in the same boat,’ he added.

Norway’s handball player Katinka Haltvik, quoted by public broadcaster NRK, also said ahead of the fine that the team would happily pay it.

It was expected the team would only be fined 50 euros (£43) per player, meaning the fine is 1,000 euros more than first anticipated.

Clothing has long been an issue in beach sports, with some women players finding bikinis degrading or impractical.

While bikinis have not been compulsory for beach volleyball players since 2012, IHF rules state ‘female athletes must wear bikini bottoms’ and that these must have ‘a close fit’, be ‘cut on an upward angle toward the top of the leg’ and a side depth of no more than 10 centimetres.

Ahead of the European Championship, Norway approached the European Handball Federation to ask for permission to play in shorts, but were told that breaches of the rules were punishable by fines.

They complied, until their last match.

‘The most important thing is to have equipment that athletes are comfortable with,’ Lio said, adding that ‘it should be a free choice within a standardised framework.’ 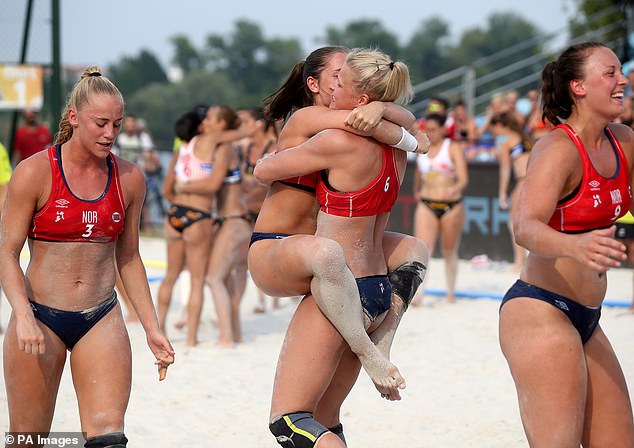 Pictured: Norway’s beach handball team compete in 2017 in regulation clothing. The issue has been debated in beach sports circles for several years as some players find the bikini degrading or simply impractical 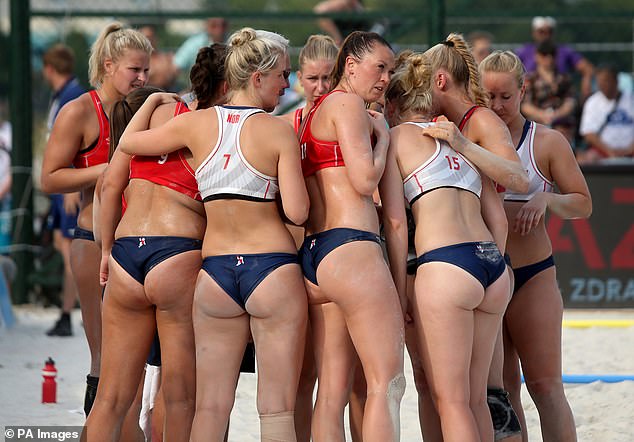 By ditching the regulation bikini bottoms, the Norwegian women’s team (pictured in 2017 wearing bikini bottoms) has been fined 150 euros per player – a total of 1,500 euros

A Norwegian motion to amend the current rules will be discussed by the bodies in the coming months.

‘The EHF is committed to bring this topic forward in the interest of its member federations, however it must also be said that a change of the rules can only happen at IHF level,’ EHF spokesman Andrew Barringer said in an email.

In a reverse of the situation earlier this year, German beach volleyball stars Karla Borger and Julia Sude said they would boycott a tournament in Qatar, saying it is ‘the only country’ where players are forbidden from wearing bikinis on court.

‘We are there to do our job, but we are being prevented from wearing our work clothes,’ Borger told a radio station at the time.

‘This is really the only country and the only tournament where a government tells us how to do our job – we are criticising that.’ 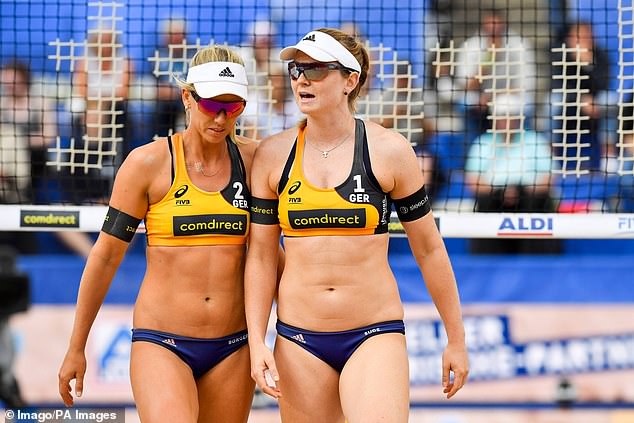 In a reverse of the situation earlier this year, German beach volleyball stars Karla Borger and Julia Sude (pictured) said they would boycott a tournament in Qatar, saying it is ‘the only country’ where players are forbidden from wearing bikinis on court

But in a major U-Turn, the Qatar Volleyball Association (QVA) said there would be ‘no restrictions’ on players wearing bikinis.

Female players had been asked to wear shirts and long trousers rather than the usual bikinis, a rule which the world beach volleyball federation FIVB said is ‘out of respect for the culture and traditions of the host country’.

Qatar is a conservative Islamic country in which women are expected to dress conservatively, however the large numbers of foreign workers and bids to boost tourism means adherence is somewhat patchy.