Damien Hirst launches NFT ‘Currency’ which forces buyers to decide whether to keep £1,400 A4 paper spot paintings or online token instead

Renowned British artist Damien Hirst has launched his own non-fungible token named ‘The Currency’ that will force buyers to choose between a £1,400 physical painting or obtain an online token instead.

Mr Hirst, 56, has started selling 10,000 non-fungible tokens – a digitised method of storing collectable unique assets such as works of art – that represent 10,000 of his unique A4 enamel works he made in 2016.

The physical works are said to be stored in an undisclosed location, within a ‘secure vault’.

The $2,000 (£1,443) NFTs will contain high resolution images of both the front and back of the spotty artwork created by the British artist, who reportedly has a net worth of more than £315 million.

While the NFT’s owners will be able to trade their asset freely, whoever is in possession of the token two months after its issue will face a difficult choice: Keep the NFT or the physical piece of artwork. 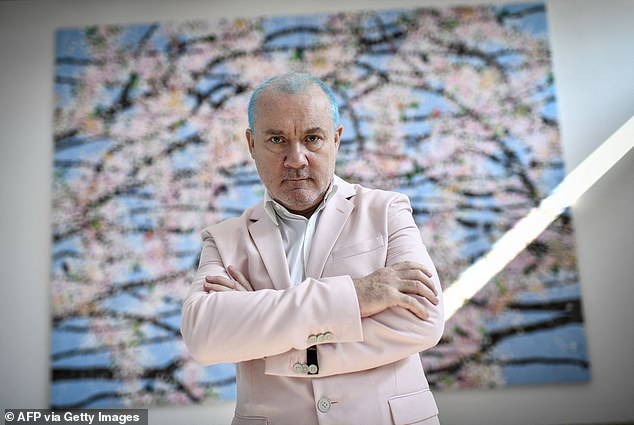 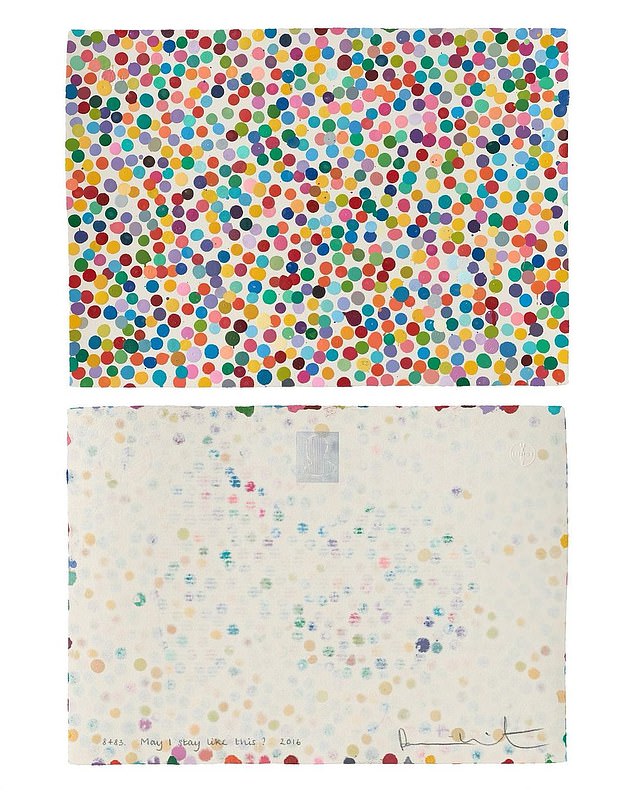 The $2,000 (£1,443) NFTs will contain high resolution images of both the front and back of the spotty artwork created by the British artist

While they make look similar, the 2016 works were originally made using handmade piece of A4 paper, with each containing a signature, hologram and watermark of Mr Hirst’s head.

No two colours used are the same, and each print has its own title.

Anyone hoping to grab their own print will have to fill in an application process that started today and lasts for one week.

Speaking in a video interview with the Financial Times, Hirst explains why he has opted for this ‘experiment’: ‘I’m forcing people to make a choice. But the purchaser always has a choice.

After two months, art collectors could be faced with the full allocation of non-fungible tokens, 10,000 pieces of artwork or a mixture of both.

Once a customer makes their choice between the physical or digital copy, the other will be destroyed. Hirst has promised the physical artworks will all be collected and destroyed together publicly at a later date.

‘I really don’t know what people will do.’ 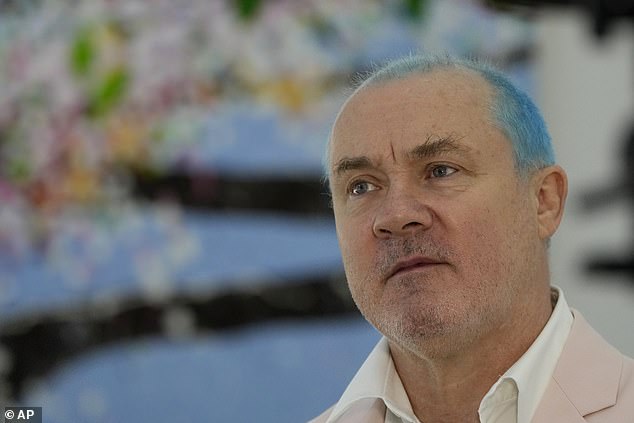 Mr Hirst’s physical works are said to be stored in an undisclosed location, within a ‘secure vault’

Earlier this year, a digital collage by American artist Beeple which exists only as a JPG file sold for a record $69.3 (£50.53) million at Christie’s, fetching more money than physical works by many better-known artists.

39-year-old Beeple, whose real name is Mike Winkelmann, is now among the top three most valuable living artists in any medium alongside Jeff Koons and David Hockney.

NFTs are known by some as the future of digital art, as they allow collectors to purchase works that lack a physical component.

Mr Hirst previously said: ‘For the past three years the project has been expanding into blockchain and NFTs.

‘I made them all 5 years ago, and they are in a vault but about to come to life through their launch on the blockchain. They also exist as NFTs and a related crypto currency.

‘The whole project is an artwork, and anyone who buys ‘The Currency’ will participate in this work. It’s not just about owning it.’

What is a non-fungible token (NFT)?

What is a NFT?

A Non-Fungible Token (NFT) is a unique digital token encrypted with an artist’s signature and which verifies its ownership and authenticity and is permanently attached to the piece.

Most NFTs include some kind digital artwork, such as photos, videos, GIFs, and music. Theoretically, anything digital could be turned into a NFT.

Where do you buy them?

At the moment, NFTs are most commonly sold in so-called ‘drops’, timed online sales by blockchain-backed marketplaces like Nifty Gateway, Opensea and Rarible.

Why would I want to own one?

There’s an array of reasons why someone may want to buy a NFT. For some, the reason may be emotional value, because NFTs are seen as collectors items. For others, they are seen as an investment opportunity similar to cryptocurrencies, because the value could increase.

When were NFTs created?

Writer and podcaster Andrew Steinwold traced the origins of NFTs back to 2012, with the creation of the Colored Coins cryptocurrency. But NFTs didn’t move into the mainstream until five years later, when the blockchain game CryptoKitties began selling virtual cats in 2017.