Washington: US President Joe Biden plans to stick to his self-imposed August 31 departure deadline from Afghanistan, rejecting demands from some of America’s closest allies to delay the withdrawal of US troops.

British Prime Minister Boris Johnson, who called an emergency meeting of the G7 nations to discuss the issue, led the push for Biden to extend the military mission to ensure as many people as possible can be evacuated from the Taliban-controlled country.

Biden has also faced calls from veterans groups and congressional Democrats to push back the withdrawal date. But the Taliban has threatened to retaliate in some form if the US stays in Afghanistan past the end of the month. 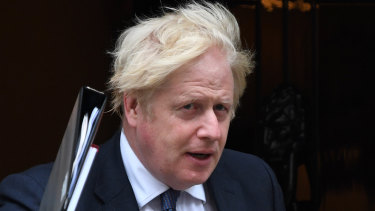 Speaking at the White House following the G7 meeting, Biden said the US was “on pace” to complete the evacuation mission by August 31.

He said that he had instructed military leaders to draw up contingency pans to adjust the withdrawal table if necessary. But he stressed that the situation in Kabul was “tenuous” and that US troops face increased risks each day they remain in Afghanistan.

“We’ve already had gun-fighting break out,” he said. “We run a serious risk of it breaking down as time goes on.”

Johnson said the leaders had agreed on a “road map” for future engagement with the Taliban and will insist on the “safe passage” of people who want to leave Afghanistan beyond the end of August.

“The number one condition we’re setting as G7 is that they have got to guarantee, right the way through, through August 31 and beyond, safe passage for those who want to come out,” Johnson said following the meeting.

“We will go on right up until the last moment that we can.”

While avoiding publicly criticising Biden, Johnson made clear that he wanted the US troops to stay beyond the end of the month.

“You’ve heard what the President of the United States has had to say, you’ve heard what the Taliban have said,” he said. “I think you’ve got to understand the context in which we’re doing this. We’re confident we can get thousands more out, but the situation at the airport is not getting any better.” 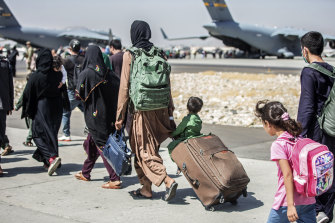 Evacuees walk towards their flight at Kabul airport.Credit:US Marine Corps

Earlier in the day UK Defence Minister Ben Wallace said: “We want to stay longer if it is possible to do so. The two people with the biggest vote in the room are the US … and the Taliban.”

He added that “the scale of the challenge means that not everyone will get out”.

“We are ruthlessly prioritising people,” he told the BBC.

Taliban spokesman Zabihullah Mujahid told reporters in Kabul that his group will accept “no extensions” to the evacuation deadline.

“August 31 is the time given and after that it’s something that is against the agreement,” Mujahid told a press conference.

“All people should be removed prior to that date. After that we do not allow them, it will not be allowed in our country, we will take a different stance.”

Mujahid also said the Taliban would bar Afghans from accessing roads leading to the airport, while allowing foreigners to pass through, in order to prevent large crowds outside the walls. It was not immediately clear if they would stop Afghans who are escorted by foreigners or in the process of being evacuated by Western nations.

The Taliban will take over security at the airport after the withdrawal, Mujahid said. It’s unclear when commercial flights would resume, putting pressure on the current evacuation efforts to get as many people out as possible.

House Intelligence Chairman Adam Schiff, a Democrat, said it was “very unlikely” the US would be able to evacuate all Americans and Afghan allies by August 31.

“It’s hard for me to imagine all of that can be accomplished between now and the end of the month,” Schiff said.

Democratic congressman Jason Crow, who served as a military officer in Afghanistan and Iraq, was more definitive, saying it would be impossible to evacuate all Americans and allies in just a week.

“The deadline must be extended,” he said.

These demands came even as the US continued to dramatically increase the pace of negotiations. The White House said that approximately 21,600 people were evacuated from Afghanistan over the past 24 hours, up from around 2000 a day late last week.

This was the highest daily figure since the evacuations began.

The US has evacuated about 58,700 people from Kabul since August 14, according to the White House.