Riga, Latvia: Russians using smart TVs reported seeing something atypical: A message appeared instead of the usual channels. “The blood of thousands of Ukrainians and hundreds of murdered children is on your hands,” read a message that took over their screens. “TV and the authorities are lying. No to war.”

The apparent hack, targeting ordinary Russians sitting by their TVs or looking things up on their search engines, broke through the pro-Moscow messaging as Russia celebrates what it calls ‘Victory Day’, a commemoration of the Soviet Union’s role in defeating Nazi Germany in World War II. 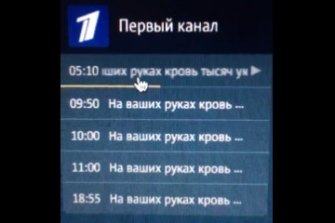 An image of a hacked Russian smart TV menu.

The Nazis were defeated at the hands of the US, UK and Soviet Union in 1945. The event is remembered as “VE Day” in the US and UK.

As Russia revved up its attacks in Ukraine’s south and east, thousands of Russian troops assembled in Moscow’s Red Square for a military parade, where President Vladimir Putin gave a speech doubling down on his invasion of Ukraine, and blaming NATO and Western countries without evidence for provoking Russia.

The antiwar message that appeared on the screens of Russian smart TV users also appeared on the platforms of Yandex, Russia’s IT giant that, similarly to Google, combines many products under its umbrella, including a search engine and a service providing TV programming schedules.

On that page, the daily programs for state-run Channel One and Russia 1 were also defaced early on Monday.

Russia’s equivalent of YouTube, called RuTube, was also affected, it said in a statement.

“Following the sites of various Russian ministries, which have been constantly subjected to cyberattacks over the past two months, hackers have reached RUTUBE,” RuTube said on its official Telegram channel. “Our video hosting has undergone a powerful cyberattack. At the moment, it is not possible to access the platform.”

The streaming platform later said that it had “localised the incident” and was working to restore normal service, and that the apparent hackers were unable to access its content library.

Russian government websites and state-run media outlets have faced what the government has called an “unprecedented” wave of hacking attacks since the Kremlin launched its invasion of Ukraine on February 24.

In mid-March, Russia’s Ministry of Digital Development and Communications said that the attacks were at least twice as powerful as any previous ones, prompting the agency to enact unspecified measures to protect the services.

Russian officials also appear to be taking digital action on their own, even within their country.

Articles with headlines condemning the invasion appeared on the front page of the Russian news website Lenta.ru early on Monday.

Each article published by Lenta featured the disclaimer that the material had “not been agreed with the editorial leadership,” and that “the Presidential Administration will punish the publication for publishing this”.

“In other words,” it said, “take a screenshot of this now, before it is deleted.”

The stories – with forceful headlines such as, “Vladimir Putin has turned into a pitiful and paranoid dictator and paranoid” and “Russia abandons the corpses of their soldiers in Ukraine” – were shortly taken down.

Such statements would most likely be forbidden in Russia under a law passed this year that bans any attempt to discredit Russian forces and their actions in Ukraine. Free-speech advocates say the law is a way for Russia’s government to control the narrative around the war. It prohibits anyone from labelling the events in Ukraine – which Putin calls a “special military operation” to “denazify” the country – an “invasion.”

Yegor Polyakov, an editor at Lenta, claimed joint responsibility for the antiwar material and said he and his colleague Alexandra Miroshnikova made a “conscious decision” to oppose the war.

“This is not a “hack by hackers” at all, this is our conscious decision, which was made relatively long ago, but it was not possible to implement it quickly (I won’t say for what reasons yet),” he said in a statement provided to the Russian outlet Mediazona.

Polyakov said there is almost no independent media left in Russia and called on “potential critics in the professional and not only environment not to forget about humanism and not put labels on everyone at once.”

He said he and Miroshnikova “no longer work at Lenta.”