Body camera video released by Houston police shows an officer fatally striking a pedestrian during a pursuit last month in dark and rainy conditions and pleading with the man to wake up after the crash.

The edited video, released last week and recorded on Dec. 4 in an area south of downtown Houston, captures a snippet of what happened before and after the pedestrian, Michael Jackson, 62, was fatally struck.

Jackson, a mechanic, was walking on the sidewalk to a barber shop when he was killed, his wife, Janice Jackson, told NBC affiliate KPRC of Houston.

In the video, the officer, identified by the Houston Police Department as Orlando Hernandez, 25, can be seen driving while an officer speaking over the radio appears to describe suspects wanted in an aggravated robbery. 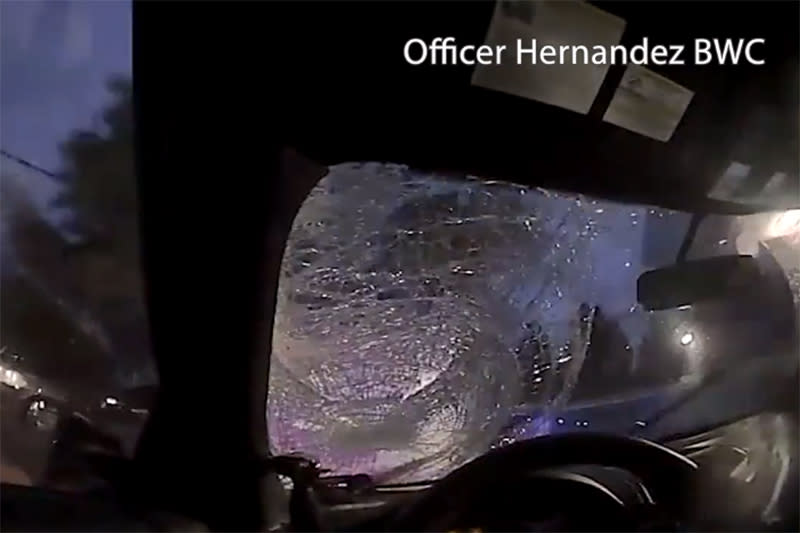 Authorities have said that Hernandez and a second officer were helping respond to the robbery.

Roughly 20 seconds into Hernandez's body camera video, the officer can be seen swerving the car and hitting something before he crashes into a dumpster.

Hernandez is heard yelling expletives before running to Jackson's body in the street.

"I just got wrecked out," Hernandez can be heard saying over the radio. "Our male patient is … not conscious, not breathing, has bleeding from his head."

Jackson was pronounced dead at 5:51 p.m., 12 minutes after Hernandez and the second officer were dispatched to assist on the call, according to police.

Hernandez, who has been on the force less than two years, has not been accused of wrongdoing in the incident.

An assistant Houston police chief, Yasar Bashir, said in the edited video that authorities are still in the early stages of an inquiry into what officials have previously called an "absolute tragedy."

Hernandez is on administrative duty with pay during the inquiry, according to Houston police.

"The officers were responding to a violent felony,” Harris County Assistant District Attorney Sean Teare told reporters last month. “That is something we are going to take into account."

Teare added that authorities "are not going to treat this case any different because it involves officers. It involves a human being who lost his life. So we’re going to be looking at it through that lens.”

"I don't think he ever saw the poor gentleman that was walking on the sidewalk," he said, adding that the rain and the type of call the officers were responding to made the "whole thing … just horrible."

Authorities have not said how fast Hernandez was driving. NBC News' efforts to reach him and the police union were not successful Friday.

Janice Jackson, who has described her husband as "just a loving person," told KPRC that the events of Dec. 4 are a "nightmare."

"I just want it to be over," she told the station.