London: Britain is considering copying Australia’s offshore processing regime to stop the flow of migrant boats across the English channel, but is struggling to find any volunteer countries to house asylum seekers while their claims are considered.

Prime Minister Boris Johnson told a Downing Street news conference that the objective was to “save lives and avert human misery”. 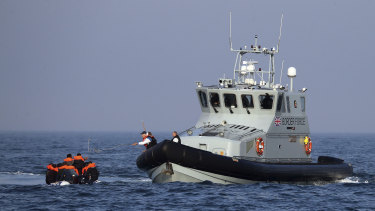 A Border Force vessel assists a group of people thought to be migrants on board from their inflatable dinghy in the English Channel.Credit:PA

The idea was mooted in several British media outlets which reported that Home Secretary Priti Patel was considering setting up an offshore processing regime heavily modelled on Australia’s where asylum seekers who travel by boat are sent to detention centres in Papua New Guinea and Nauru and often wait years for their refugee claims to be processed.

Prime Minister Boris Johnson said the government was trying to stop the abuse of migrants perpetrated by “a bunch of traffickers and gangsters.”

“The objective here is to save lives and avert human misery,” he said.

“Because people are crossing the Channel who are being fooled, who are being conned by gangsters into paying huge sums of money, risking their lives.

“People have died trying to make this crossing and it is a deeply repugnant traffic that we need to stop.

“The objective is a humanitarian and a humane one which is to stop the abuse of these people by a bunch of traffickers and gangsters,” the Prime Minister said.

Earlier the Prime Minister’s spokesman said that the government was looking at a “whole host of other countries” to inform it’s plan, to be set out in coming weeks.

At least one of those countries is Australia; Britain’s Home Secretary Priti Patel has a strong relationship with her Australian counterpart Peter Dutton and met with former prime minister Tony Abbott during his most recent visit to Britain where is has been given an unpaid role on the UK’s Board of Trade.

The pair posed for a photograph in front of a whiteboard with a map of the English Channel fixed to it. The Home Office does not provide running statistics of boat crossings, but officials said in September last year that 5000 crossings were made in the year before the flow subsided because of the coronavirus pandemic.

Among the various destinations touted as potential offshore processing centre hosts were the Isle of Man, Gibraltar, some Scottish isles and third-countries such as Turkey.

But Fabian Picardo, the chief minister of the government of Gibraltar said the idea had never been raised with him and wrote to Home Secretary Priti Patel to confirm that the reports were “groundless speculation.” 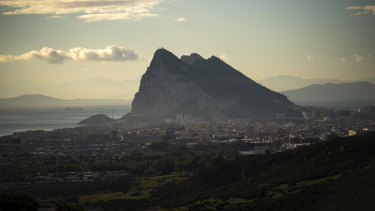 “I can confirm that this issue has not been raised with me at any level,” Picardo said.

“I would have made clear that this is not an area on which we believe we can assist the UK.

“Our geography makes some things difficult … and the processing of asylum seekers to the UK in Gibraltar would be one of them,” he said. 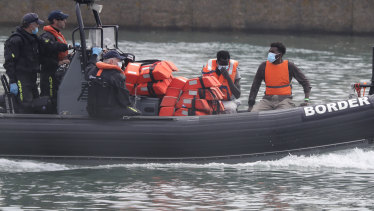 A Border Force vessel brings a group of migrants into the port city of Dover, England.Credit:AP

Similarly, a spokesman for the government of the Isle of Man also said they never had the proposal raised with them.

“The Isle of Man is self-governing, the UK Government would not be able to open any sort of processing centre on the Island without consent,” the spokesman said.

“The UK Government has not contacted the Isle of Man Government about any such proposal.”

The Isle of Man is an idyllic self-governing British Crown dependency in the Irish Sea situated between Great Britain and Ireland. It is home to around 83,000 people.

While the Isle of Man did not entirely rule out the idea if it proposed by the British government, turning the island into an offshore processing centre would be widely viewed as a vote-losing exercise and unlikely to ever be endorsed by the island’s inhabitants.

“The practice of offshoring has had a hugely detrimental effect on refugees and asylum-seekers,” Pagliuchi-Lor said.

“While spontaneous arrivals may be challenging, the best way to address them is through fair and effective asylum procedures, readmission agreements with safe transit countries and returns of those found not in need of international protection.”