British father-of-three has emotional reunion with family after being freed from Iraqi jail where he was being held ‘with Taliban and murderers’ over £4,000 Qatar debt

A father-of-three who was held in ‘vile’ conditions in an Iraqi jail over an unpaid debt in Qatar had an emotional reunion with his family today as he returned to Scotland.

Brian Glendinning, 43, a construction worker from Kincardine in Fife, arrived at Edinburgh airport today after being held in a prison in Iraq for two months.

Mr Glendinning’s elder brother Lee, 48, said he did not think he would ever see his him again.

‘But the fact that he is out now is amazing,’ he said. 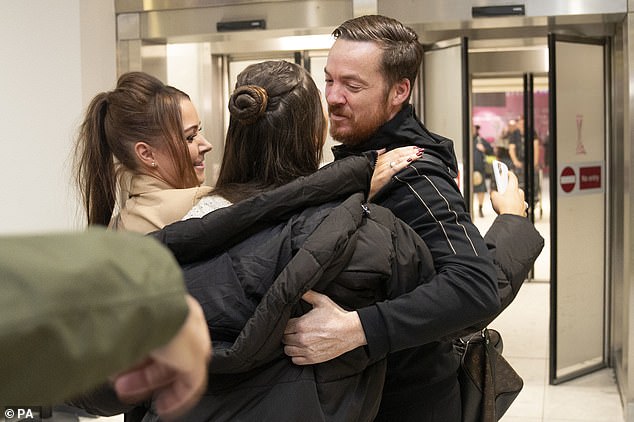 Brian Glendinning, 43, a construction worker from Kincardine in Fife, arrived at Edinburgh airport today after being held in a prison in Iraq for two months. 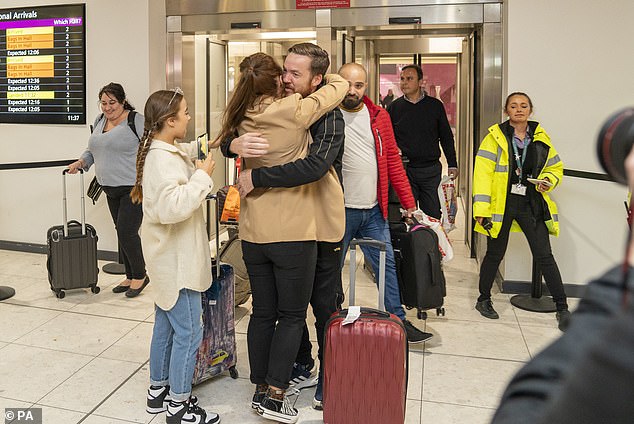 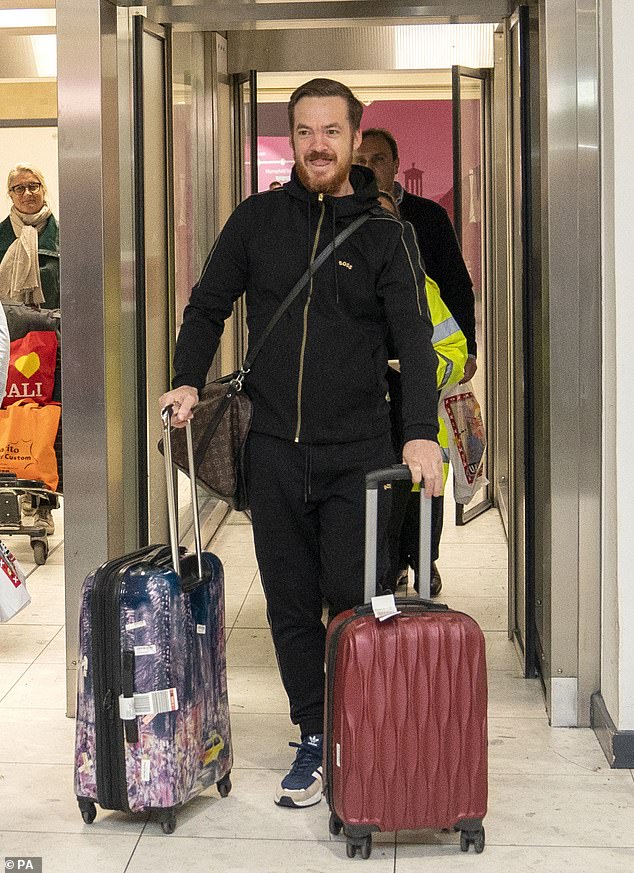 The father-of-three, who was held in ‘vile’ conditions in an Iraqi jail over an unpaid debt, had an emotional reunion with his family 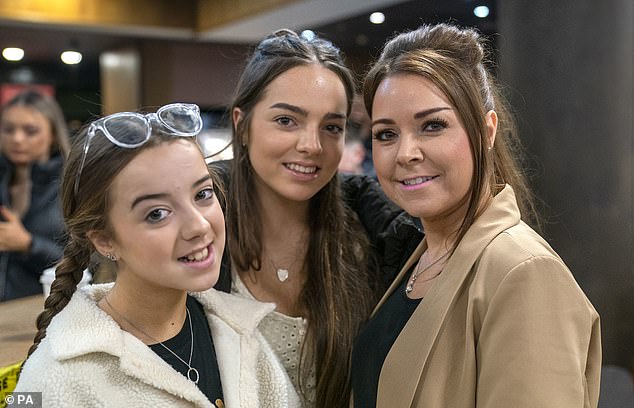 Mr Glendinning had flown to Iraq to start work at a BP oil refinery there but was arrested on September 12 on an Interpol red notice issued by Qatar in 2017.

The notice was issued after Mr Glendinning was sentenced in his absence to two years in prison in Qatar, where he had lived and worked, regarding an alleged £20,000 debt owed to the National Bank.

Mr Glendinning stopped making payments on the loan, taken out in 2016, after he stopped working and moved back to Scotland due to mental health struggles.

His family since revealed that an anonymous donor stepped in and paid the majority of the debt, helping to secure his brother’s release.

On his return home today, Mr Glendinning was met by his emotional mother, Meta, his wife, Kimberly and his daughters, 16-year-old Heidi and 12-year-old Lexi.

His brothers John and Lee were also waiting for him in Edinburgh after he returned on a flight from Istanbul.

Speaking to journalists at the airport, Mr Glendinning said: ‘I just didn’t think this time was coming anytime soon.’ 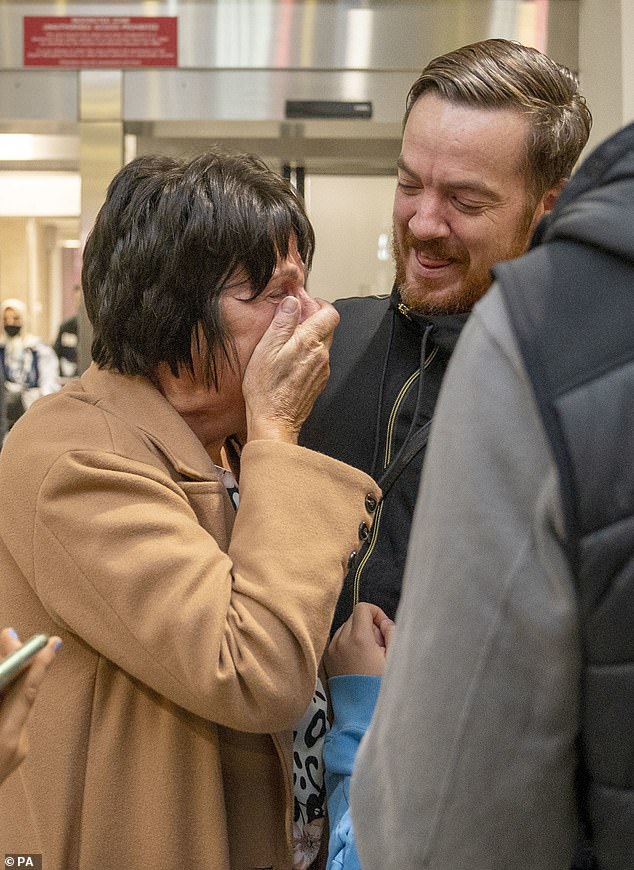 Mr Glendinning and his mother, Meta, get emotional as they embrace following his return to the UK from Iraq 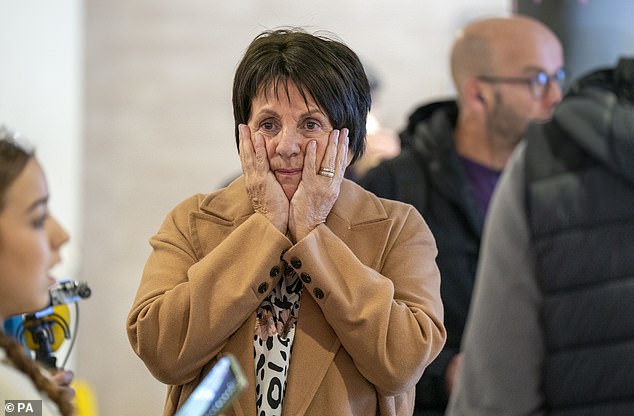 The construction worker added he was now ‘back where I belong with my family and my friends’.

Mr Glendinning continued: ‘It’s just the emotions. I didn’t think I was going to be here anytime soon.’

He thanked all those who had supported him and worked to get him freed, including Radha Stirling, founder of the Interpol and Extradition Reform (Ipex) initiative, and Douglas Chapman, the MP for Dunfermline and West Fife, who was also at the airport to greet him. 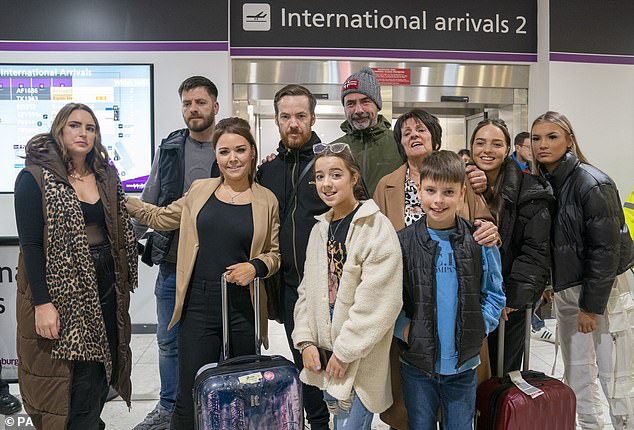 The construction worker (centre) said he was now ‘back where I belong with my family and my friends’.

‘If it wasn’t for the support from everybody back home, my family and my friends, Douglas Chapman, Radha Stirling, I would still have been there,’ Mr Glendinning said.

‘To be honest, I think I would have been on my way to Qatar and it wouldn’t have been for the World Cup.’

He was unable to shave during the time in prison – with his brother John saying there had only been a single communal shaver in the jail.

Mr Glendinning joked: ‘It’s just time to get home and get to the barbers.’

Speaking prior to his arrival, wife Kimberly said he ‘couldn’t wait to get home and see us all’. 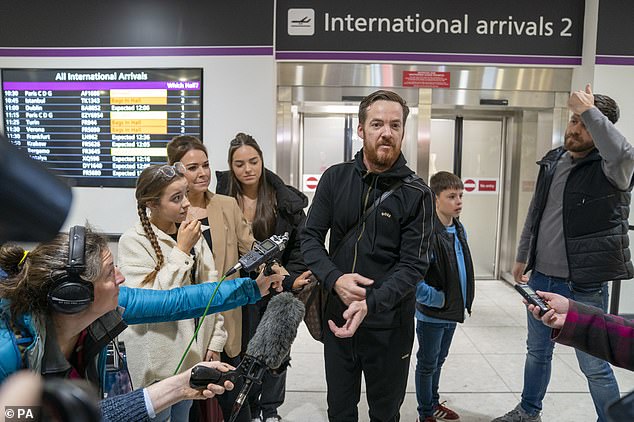 Speaking to journalists at the airport, Mr Glendinning said: ‘I just didn’t think this time was coming anytime soon.’

She added that he had missed her 40th birthday while behind bars, but added with him returning ‘that’s my birthday and Christmas in one’.

She was waiting at the airport with Heidi, 16 and Lexi, 12, and other members of the family.

Meta, 67, said she was ‘ecstatic’ and ‘overwhelmed’ at her son’s return.

Speaking about his release, Ms Stirling stated: ‘This is the moment we have been working towards the past five weeks and we’re incredibly relieved to see him back on UK soil.

‘Brian is going to take some time to rest and recuperate with his family before telling the world about the horrific experience he was forced to endure at the hands of Qatar, a country who has spent a fortune portraying itself as a tolerant society.

‘Once Brian has rested, we intend to push for British safeguards and to hold Qatar to account for the repeated abuse of our citizens’.