Singapore: China says it is willing to co-operate with Australia in the Pacific, signalling a rhetorical and diplomatic shift following the election of the Labor government.

China’s Foreign Minister Wang Yi on Monday failed to get consensus from 10 Pacific nations to sign up for Beijing’s “Common Development Vision,” a regional security deal in exchange for trade and economic co-operation that sparked fears of China’s economic and military ambitions in Washington and Canberra. But at least half-a-dozen countries including Samoa, Kiribati and Nieu have signed up for enhanced co-operation in Beijing’s trillion-dollar Belt and Road infrastructure investment program. 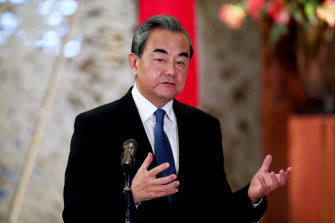 Fiji’s Prime Minister Frank Bainimarama, who hosted Wang for the Pacific foreign ministers meeting in Suva, said the region had to work together to face existential threats before signing up for any major multilateral deals.

“We put consensus first,” said Bainimarama. “Geopolitical point scoring means less than little to anyone whose community is slipping beneath the rising seas, whose job has been lost to a pandemic.”

The leak of China’s proposal to Reuters and a warning by David Panuelo, the President of the Federated States of Micronesia that it would shift the region “into Beijing’s orbit” put hopes of a deal being signed on Monday in peril. The region, which has found itself in the middle of a geopolitical contest between the United States, Australia and China, puts a high value on unity in its negotiations through the Pacific Islands Forum. Instead, Wang said that China would now pursue a policy position paper in the region as it looks to build multinational support for its vision of “common development, sovereignty and territorial integrity”.

“Some have been questioning ‘why China has been so active in supporting Pacific countries’?” said Wang, who did not take any questions from reporters at the press conference.

“China is a major developing country, and we do this with a great sense of responsibility.”

Wang presented a message from President Xi Jinping stating China was willing to work with Pacific Island nations to build a “community with a shared future” – highlighting Beijing’s growing diplomatic investment in the region after signing a landmark security and trade deal with Solomon Islands in April.

In his first direct mention of Australia during his 10-day, eight-country tour, Wang told Samoan Prime Minister Fiame Naomi Mataafa that China was not seeking “exclusive rights” to help develop the area. 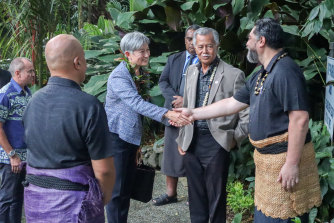 Penny Wong arrived in Fiji soon after her visit to Tokyo.Credit:Getty

Wang’s comments followed a diplomatic blitz by Foreign Minister Penny Wong last week. Wong said it was up to individual nations to make sovereign decisions about their future but warned them that a region-wide deal with Beijing could sacrifice their independence, lead to unsustainable debt levels and endanger the Pacific’s security. The countries visited by Wang sit on a key strategic route between the United States, Australia and Asia and less than 2000 kilometres off the coast of Queensland that could block supply lines in the event of a conflict.

Wang failed to get consensus on the Pacific-mega deal but halfway through his 10-day tour has signed dozens of bilateral agreements including police training in Samoa, COVID-19 economic recovery plans with Fiji, radio and television co-operation with Niue and climate change and marine protection programs with Kiribati.

Beijing’s top diplomat has positioned China in meetings with his Pacific counterparts as the leader of a growing group of developing countries that feel left out of the US-led international order that he argues is fuelled by Western geopolitical aims.

Prime Minister Anthony Albanese has yet to publicly respond to a message from Chinese Premier Li Keqiang congratulating him on his election. Beijing’s tone since the Labor victory on May 20 has been trending softer but $20 billion in trade sanctions on Australian exports remain in place and Albanese has maintained that Australia would not begin negotiations until trade restrictions were lifted.