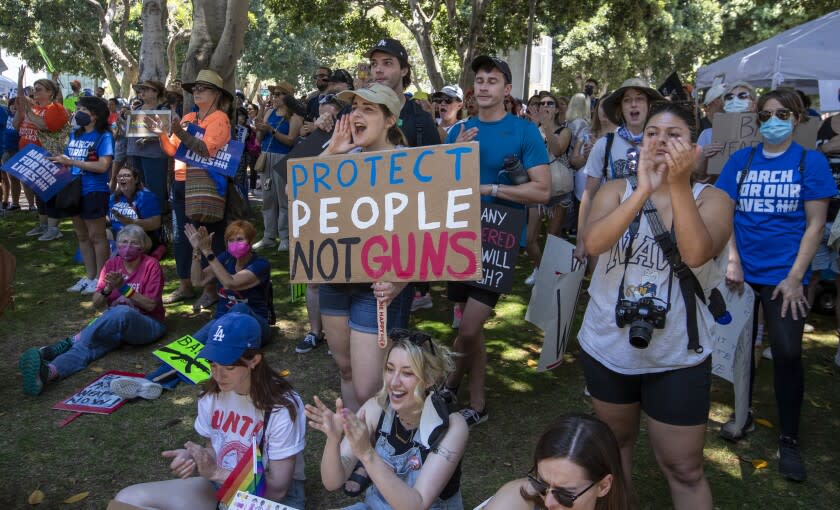 The California Legislature rejected a bill to strengthen the state’s concealed-carry law that Gov. Gavin Newsom and Democratic leaders crafted in response to the U.S. Supreme Court’s ruling that expanded a person’s right to carry firearms outside the home.

The legislation, Senate Bill 918, fell just two votes shy of passage in the Assembly Tuesday evening. The Assembly agreed to hear the bill again Wednesday, the final day of the 2022 legislative session, through a process that’s called reconsideration.

The bill faced headwinds from the outset, since State Sen. Anthony Portantino (D-La Cañada Flintridge) added an urgency clause to the legislation so it could go into effect immediately, a change that required a two-thirds majority vote in both houses of the Legislature

But the Assembly upheld its decision early Thursday morning with a final 52-23 vote, despite its proponents and Atty. Gen. Rob Bonta spending the day in the state Capitol lobbying moderate Democrats who abstained or voted against the measure. The governor’s office did not respond to requests for comment on whether Newsom helped lobby for the final votes.

“I’m legitimately surprised it didn’t pass,” Portantino said. He vowed to revive the measure in December, when lawmakers can start introducing legislation for the 2023-2024 session.

Bonta said the supermajority vote threshold made passing SB 918 more difficult. But he defended the urgency to implement the legislation this year, arguing that those who pose a public safety risk need to be prevented from being issued a permit.

“The longer it takes to get this bill into effect, the more people are at risk, every day,” he said.

After the high court struck down New York’s restrictive concealed-carry law, a statute similar to those in California and other blue states, Newsom, Bonta and Portantino unveiled SB 918 as a backup plan that would allow California to continue to restrict who can get a license.

The U.S. Supreme Court in June determined in the New York State Rifle & Pistol Assn. vs. Bruen case that “shall-issue” laws — which give broad authority to local licensing officials to reject applications — violated a person’s constitutional right to bear arms for self protection, rendering California’s requirement for an applicant to demonstrate “good cause” for a permit as unconstitutional.

Writing for the court, Justice Clarence Thomas said that states could still prohibit guns in “sensitive places,” including schools and government buildings, as long as the list of restricted places wasn’t overly expansive. In a concurring opinion, Justice Brett Kavanaugh and Chief Justice John Roberts also noted that states were generally free to require objective licensing requirements, such as firearms training, fingerprinting and background checks.

Gun control advocates saw an opening in those caveats to strengthen California’s concealed carry law, but within what they said were the confines of the Bruen decision.

The proposal would have classified dozens of places in California as “sensitive,” including courts, hospitals, airports, public transportation, bars, public parks, libraries and churches. As a way to replace the former “good cause” mandate, SB 918 would have required local licensing officials, primarily sheriffs’ departments, to run through a list of criteria to ensure a person was a “qualified” applicant.

Officials would have to conduct in-person interviews with applicants, interview at least three character references and review social media and other publicly available statements to determine if those applying for permits were a danger to the public or themselves.

Newsom prioritized SB 918 as one of more than a dozen bills he requested this year to prevent mass shootings. He’s already signed several into law, including two major bills that establish a private right of action against the industry and limit firearm marketing to minors.

Gun rights groups, including the National Rifle Assn. and Gun Owners of California, staunchly opposed the bill. They characterized SB 918 as a disingenuous effort to comply with Bruen, and argued that it would instead target law-abiding firearms owners while doing nothing to stop illegal gun activity.

Eugene Volokh, a UCLA School of Law professor, said it’s likely that some certain provisions of SB 918 would have been challenged, including the wide-ranging sensitive places list and the requirement to interview three character witnesses and review social media posts.

Bontasaid he was confident the bill would have fit into Bruen’s legal boundaries.

“We were preparing for a Bruen decision that was potentially going to be something that we were not excited about,” he said. “And we wrote this very thoughtfully to comport with the constitutional regime that was pronounced by Bruen, and we’ll defend it in court. Whatever the court decides, we’ll comply with what the court decides. But we think we are on very strong ground.”