A Perth councillor has been captured on Zoom having a desk-banging, light-flicking tantrum during a three-hour long meeting.

The Town of Cambridge was debating an urgent item of business raised by Mayor Keri Shannon regarding an outstanding payment.

Cr Rod Bradley spoke first to the motion expressing his disdain at the “flippant” item being put before councillors at the last minute.

“I’m a busy person, I have a lot of commitments in my life and you spring this on me at 5.30pm in the afternoon before a 6pm council meeting,” he said.

“I think that is grossly inconsiderate and I can’t really participate in this because I haven’t had a chance to read it or understand it. 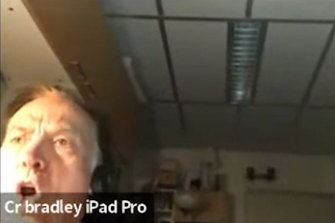 The councillor was cross about a last-minute addition to his meeting.Credit:Youtube

“This has happened before. We just don’t need this. I have trouble coping with it. I’m not going to participate in this nonsense.”

Mayor Shannon thanked the councillor for his contribution and moved on but Cr Bradley interjected again before the mayor attempted to shut him down – eventually requesting his microphone be turned off.

Cr Bradley repeatedly shouted “this is wrong” and thumped his desk over and over.

Exasperated, the mayor told Cr Bradley he was acting like a child.

“This is really another desk-banging exercise. I don’t think we need it,” she said.

Cr Bradley refused requests to turn his microphone off and continued his tirade, escalating to flicking his light on and off.

Mayor Shannon said it was a case of serious disorder.

The video is another example of the pitfalls of Zoom meetings. In February 2021 a West Texas judge issued a word of caution for those attending court hearings via Zoom to always check for filters before logging on.

The warning came after an attorney accidentally joined a video court hearing while using a Zoom filter that made him appear like a fluffy white kitten.

Cr Bradley and Mayor Shannon have been contacted for comment.