Communiques issued during the weekend from General MacArthur’s headquarters indicate that the great naval battle off the north-east coast of Australia has temporarily ceased. The enemy has been repulsed, but he is expected to reorganise and strengthen his forces for another combined effort. Allied headquarters in one communique said “We will continue our attacks against him.” 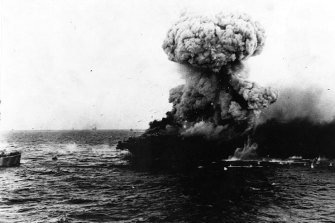 A mushroom cloud rises after a heavy explosion on board USS Lexington, 8 May 1942.Credit:US Navy

Meanwhile aerial conflicts in South-West Pacific area have been continuing, and yesterday further damage to Japanese ships and planes was reported. One enemy seaplane tender and one tanker were damaged and four seaplanes destroyed or damaged. One other seaplane was shot down and some were machine-gunned on the water. The enemy has renewed his air attacks upon Port Moresby, but with no success.

General MacArthur’s headquarters described Japanese claims of our losses as entirely fictional, and as having no semblance of a true communique of fact.

The locality in which the battle took place is now officially described as “off the north-east coast of Australia.” The communique in which this is stated also declares that the action represented the continued efforts of the Japanese to extend aggressive conquests towards the south and south-east.

Our reconnaissance had revealed that the enemy had been gradually building up his naval and transport elements for a coordinated attack of combined forces, which was initiated several days ago. Our naval forces had then attacked in interception. Our attacks would continue.

At Allied Head Quarters there is a disposition to regard the battle as having resulted in a temporary check, at least, to the enemy’s plans. A study of the points at which engagements took place suggests a design to invade the Australian mainland.

The series of actions, a combination of attacks by land-based aircraft and naval forces, throughout last week, may be therefore taken as having frustrated, for the time being at any rate, an attempt by the enemy to organise a movement to land forces on the Australian mainland. His naval force was apparently strong enough to shield his troop transports, only one of which has so far been reported as having been sunk.

It is too soon to talk of having achieved “a smashing victory.” Our own losses have not yet been announced. A Washington communique says reports covering these are still incomplete, and they will not be announced until the information will no longer be of any value to the enemy.

A further important point is that, having received a setback, the enemy will undoubtedly make some attempt to reorganise and strengthen his forces with a view to a second co-ordinated attack by his combined forces. Evidence that he has by no means given up his aerial efforts, at any rate, is afforded by the latest communique from Allied Head Quarters, which described attacks on Friday and Saturday upon Port Moresby by Zero fighters.

The raids were not successful, the enemy having two planes shot down and three destroyed or damaged. Our losses were light.

HOW THE ENEMY HAS FARED

Losses sustained by the Japanese in the great naval and air battles which have been taking place off the north-eastern coast of Australia now are:

In addition 13 planes have been destroyed.

Three communiques were issued from General MacArthur’s headquarters during the weekend. The first was issued at noon on Saturday, the second at 7.30 p.m. on Saturday, and the third at 1 p.m. yesterday. They are given in that order:—“The great naval and air battle off the north-east coast of Australia has temporarily ceased.

“This action represents the continued effort of the Japanese to extend aggressive conquests towards the south and south-east. First efforts were aimed at expanding his air bases, but our air force has consistently and effectively attacked his fields during the past six weeks, dislocating his plans through the destruction of installations and aircraft.

“Our reconnaissance has revealed a gradual building up of naval and transport elements for a coordinated attack of combined forces, which was initiated several days ago. Our naval forces then attacked in interception. They were handled with marked skill, and fought with admirable courage and tenacity, and the enemy has been repulsed.

“Our attacks will continue.

“The enemy version of the battle off the northeast coast of Australia is entirely fictional, and has no semblance of a true communique of fact. It must be regarded in the light of propaganda rather than a military report. His claims of damage inflicted on our naval forces are fantastic. Our losses compared with his own were relatively light. The only reason they are not published at the present time is because it would reveal to him information of value.”

North-Eastern Sector — No combat activity on the naval front.

(b) The enemy continued his attack on Saturday with 18 Zero fighters; Allied interception destroyed or damaged three hostile planes; our losses light.

(a) Our reconnaissance units shot down an enemy seaplane Friday, and machine gunned several planes on the water.

(b) On Saturday our Air Force continued its raids; one enemy seaplane tender and one tanker were damaged, and four seaplanes destroyed or damaged.