A bizarre tribute to the Queen which consists of a workout based around the monarch’s life and reign has been slammed by fitness fanatics as ‘incredibly disrespectful’ and since taken down.

CrossFit UK, the British branch of the popular exercise brand which describes itself as ‘the world’s best fitness programme’ and has tens of thousands of people in its worldwide ‘community’, posted the tribute shortly after the Queen’s death.

Among the strangest parts of the WOD, or ‘workout of the day’, post was the ‘one minute rest in silence’, which many felt to be in poor taste.

Baffled ‘crossfitters’ and social media users expressed their bemusement at the strange tribute. 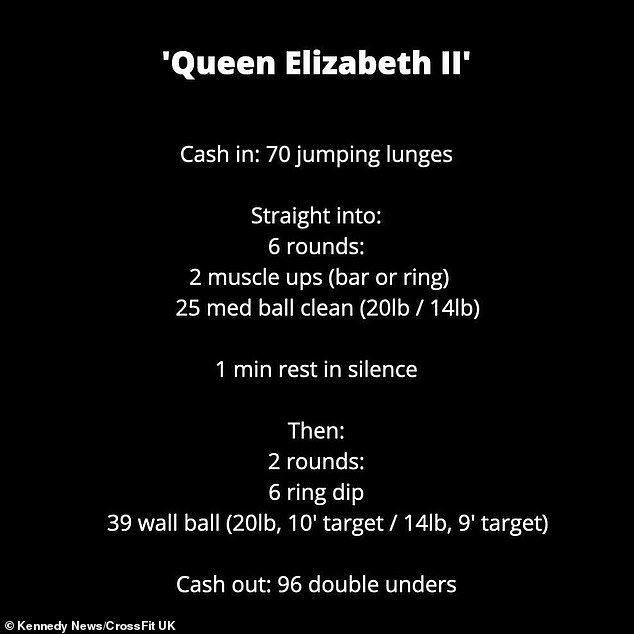 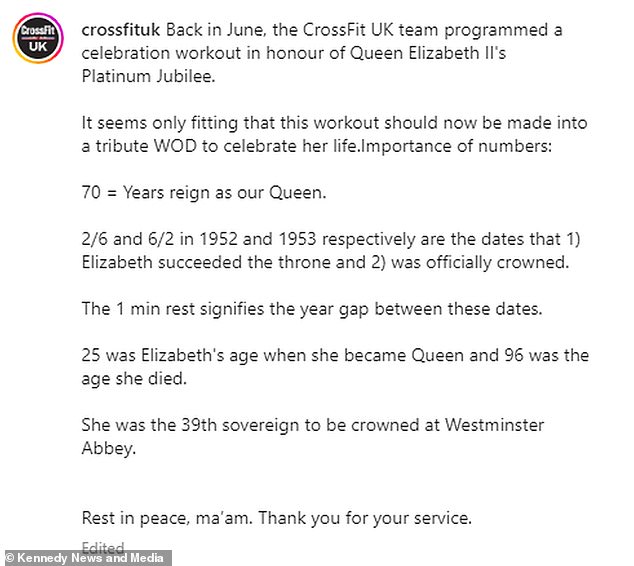 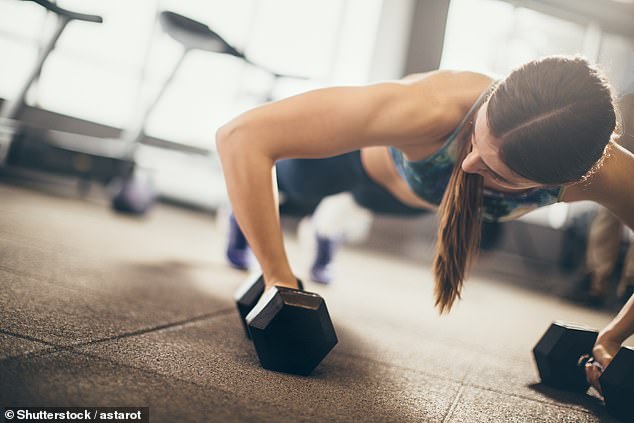 CrossFit UK, the British branch of the popular exercise brand which describes itself as ‘the world’s best fitness programme’ and has tens of thousands of people in its worldwide ‘community’

An Instagram user described it as ‘unhinged stuff’ with another saying it was ‘quite quite bizarre’.

Others felt it was ‘disrespectful’ to the late monarch, who died on Thursday aged 96. 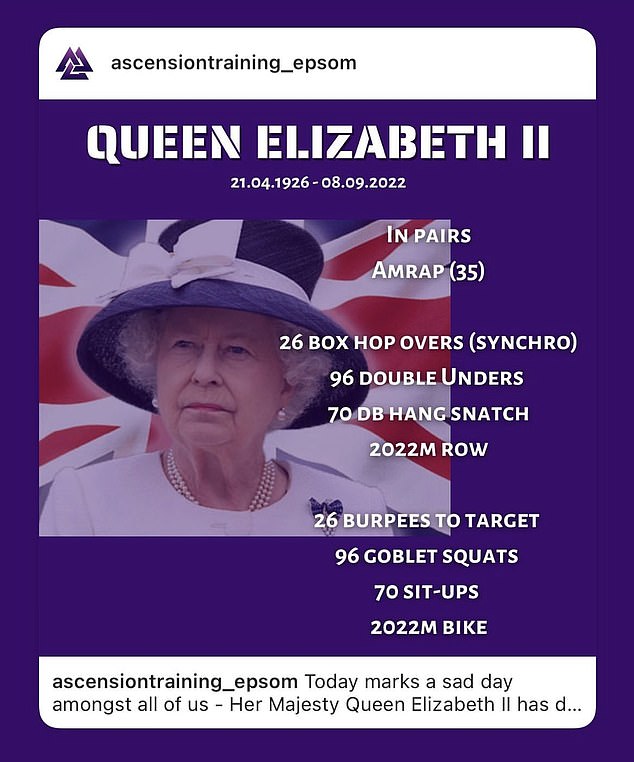 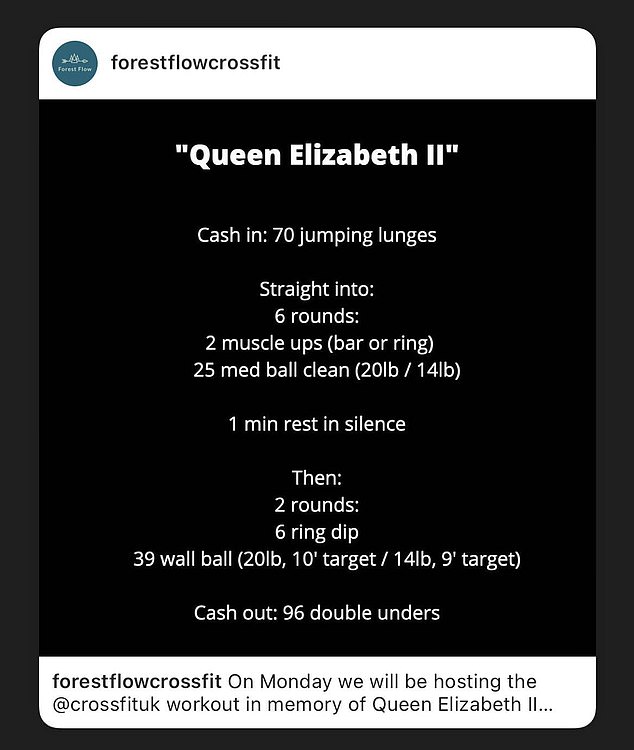 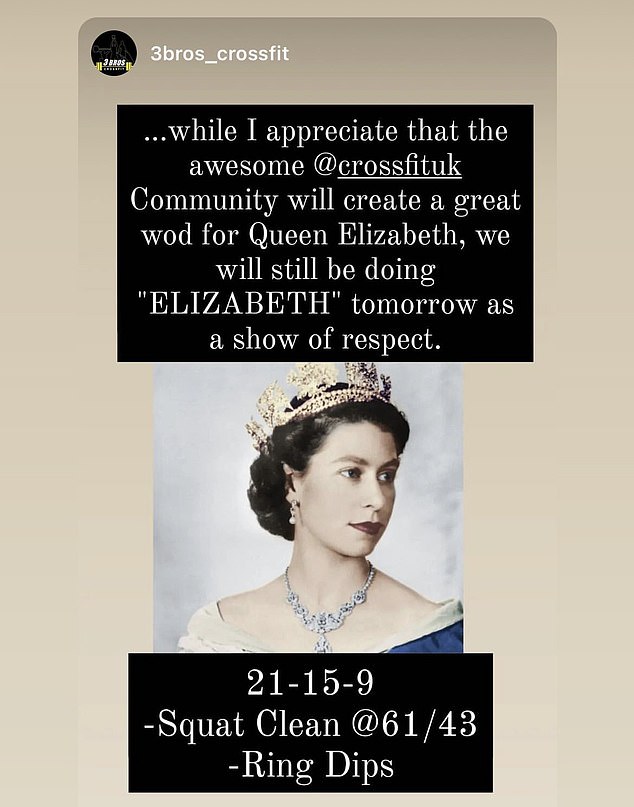 Another gym said that they would increase their class capacity so more people could take part in their ‘memorial WOD’.

Ascension Training in Epsom said in their post on Thursday: ‘Today marks a sad day amongst us all. Her Majesty Queen Elizabeth II has died peacefully.

‘In honour of her memory and to show our respects in the way only we know how, tomorrows classes will all run a memorial wod in her honour. 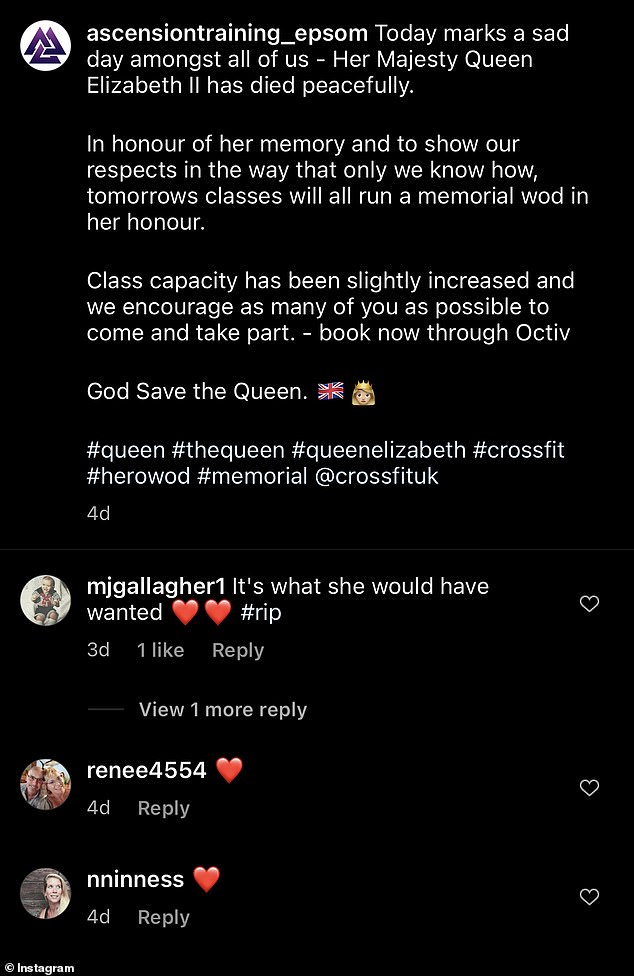 Others thought the tribute was fitting, with many leaving red hearts and ‘rest in peace’ tributes in the posts’ comments sections

‘Class capacity has been slightly increased and we encourage as many of you as possible to come and take part… God Save the Queen.’

Meanwhile some found the unusual tribute, which was a reprisal of the account’s Platinum Jubilee WOD, amusing.

Another quipped: ‘putting the RIP into ripped’ with another, commenting on the ‘rest in silence’ part of the programme, saying ‘I am finished’.

One tongue in cheek comment read: ‘1 minute rest in silence. It’s what she would have wanted.’ 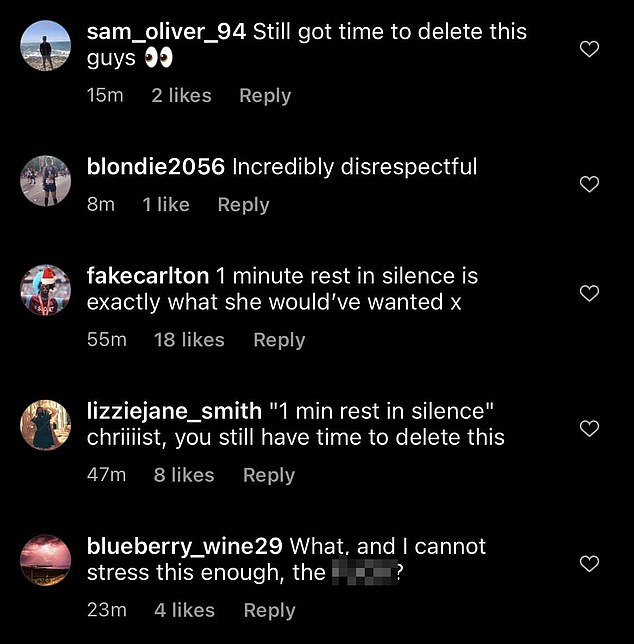 Another joked: ‘Burning calories for da queen. It’s how she would want to be remembered.’

And one shocked user said: ‘Holy s*** it’s real! I thought it was photoshopped’.

Others thought the tribute was fitting, with many leaving red hearts and ‘rest in peace’ tributes in the posts’ comments sections, while some said they would join in with the workout.

One user said it’s what the Queen, who was a keen sportswoman and remained active into her old age, ‘would have wanted’.

The workout plan included 70 jumping lunges to pay homage to her years on the throne and even 96 skips, named ‘double unders’, to represent her age.

Baffled users had mixed reactions to the ‘workout of the day’ post, with some saying it should be deleted

More complicated connections included six rounds of two muscle-ups, which the post said represent the exact date of her succession to the throne in 1952 and two rounds of six ring dips for her coronation date in 1953.

The regime’s details were posted in white text on a black image with a tribute reading ‘rest in peace, ma’am. Thank you for your service’.

One social media user, who thought it was inappropriate, wrote ‘you still have time to delete this!’

The tribute has since been deleted following the barrage of criticism and confusion online.

The well thought-through workout was explained in the post’s caption.

‘It seems only fitting that this workout should now be made into a tribute WOD to celebrate her life. Importance of numbers:

’70 is the number of years she reigned as our Queen. 2/6 and 6/2 in 1952 and 1953 respectively are the dates that Elizabeth succeeded the throne and was officially crowned.

‘The one-minute rest signifies the year gap between these dates. 25 was Elizabeth’s age when she became Queen and 96 was the age she died. She was the 39th sovereign to be crowned at Westminster Abbey.’