‘Stupidest. Thing. Ever.’ Crypto-currency group spend £2.2MILLION on an edition of Jodorowsky’s Dune thinking they were buying the copyright (despite it being online for free since 2011)

A crypto-currency group spent £2.2million on a sci-fi novel after mistakenly believing that their purchase granted them the copyright to the book.

Spice DAO took to social media to announce that they had bought a rare copy of Alejandro Jodorowsky’s 1974 adaptation of Frank Herbert’s science fiction novel Dune.

Announcing the sale on Twitter, the group said it planned to make the title ‘public’ – and ‘produce an original animated limited series’ to sell to ‘a streaming service’.

But despite paying more than one hundred times the £20,000 asking price, critics were quick to point out the book had already been online for free since 2011 and Spice DAO did not own the copyright. 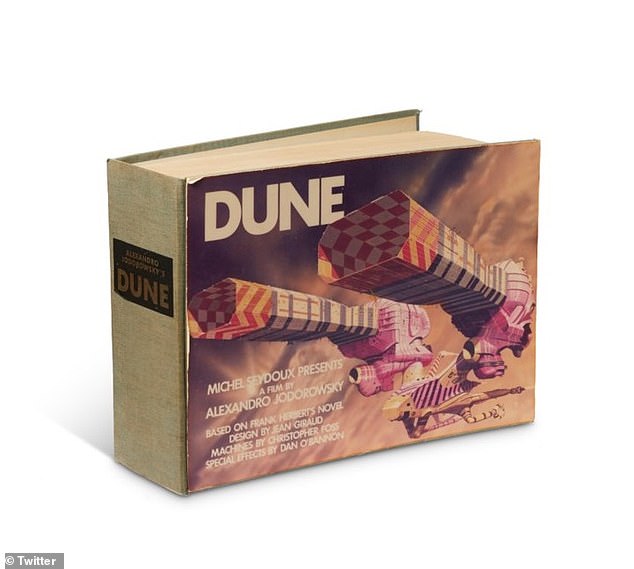 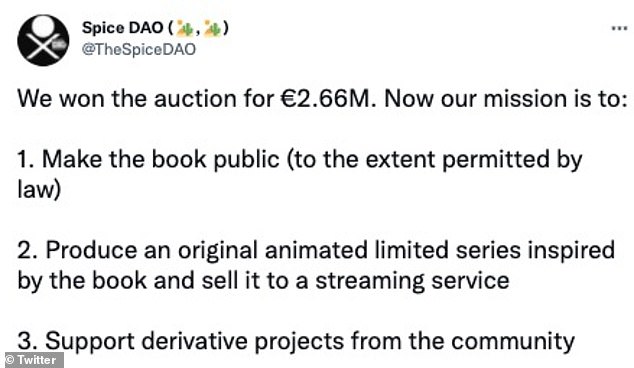 Spice DAO purchased the book after it was valued at between £21,000 and £30,000 by global auctioneers Christie’s.

The company believed it had acquired copyright to produce NFTs (non-fungible tokens).

NFTs are a cryptocurrency phenomenon that transform digital works of art and other collectibles into verifiable assets that are easy to trade.

The book itself – of which only 20 copies exist – is an original copy of cult film director Jodorowsky’s attempt to create a 14-hour long film for Dune.

The book is legendary among fans for its 3,000 drawings, which depict the entire film and were drawn by acclaimed comic artist Jean ‘Moebius’ Giraud.

The film failed after two-and-a-half years of development but was set to feature a cast including Salvador Dalí, Orson Welles, and even Mick Jagger.

In 2021, the sci-fi novel was eventually adapted into a film starring Timothée Chalamet, Javier Bardem, Jason Momoa and Zendaya.

Taking to Twitter the crypto-currency group said: ‘We won the auction. Now our mission is to make the book public, to the extent permitted by law.

‘Support derivative projects from the community.’

However social media users were quick to point out that that buying a copy of did not give the group exclusive rights to monetise its content.

One user wrote: ‘This isn’t how copyright works. It’s not even how books work.’

While another person commented: ‘I’m genuinely curious about who led you to believe that buying a copy of a book meant you bought the copyright.’

Another user added:  ‘What am I missing? I do not believe that someone spent millions on a rare book and thinks this gives them any rights to the content, but it really seems like that’s what happened.’

Garry Brannan, who works at the University of York’s Archives, commented: ‘This is undoubtedly the stupidest thing I have ever seen.

‘We’ve got an original copy of the shooting script for Carry On Up the Jungle at work. 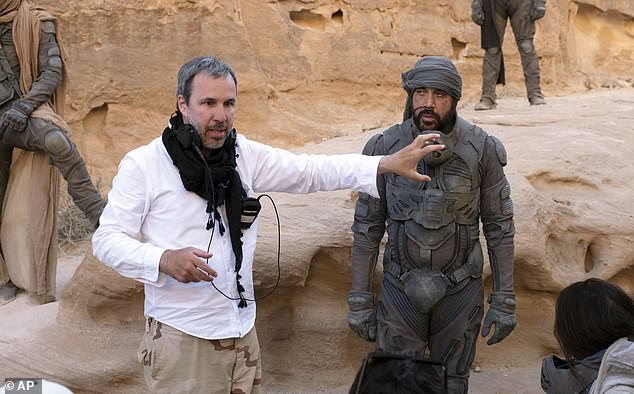 In 2021, the sci-fi novel was adapted into a film starring Timothée Chalamet, Javier Bardem, Jason Momoa and Zendaya

‘Doesn’t mean that I can produce a gritty animated remake, no matter how tempting that might be.’

Spice DAO will still be able to create a mini-series ‘inspired’ by the story – as they claim is their goal.

But they would not be able to turn any of the actual content in the book into a TV show, as they do not own the copyright.

Spice DAO, which stands for decentralized autonomous organization, is a crowdfunding group where investors pay real money for a SPICE cryptocurrency.

This SPICE currency essentially acts as shares, with owners being able to vote on the future of the group depending on the size of their share.