Madrid: At least three people have died and eleven were injured when a building in central Madrid was blown apart by an explosion on Wednesday afternoon (Thursday AEDT), with four of the wounded requiring hospitalisation.

All available evidence pointed to the blast in Calle Toledo, a street leading out from the city centre, being caused by a gas leak, Madrid's Emergency Services said, although the factors which triggered the leak were yet to be determined.

The explosion partially destroyed the small building that was flanked by a school and a nursing home. 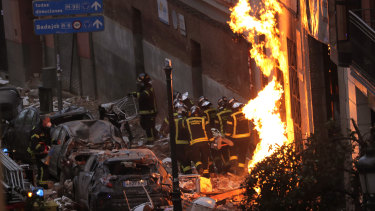 Fire-fighters carry a victim next to a damaged building at Toledo Street following a powerful explosion in downtown Madrid, Spain.Credit:AP

"It was completely nerve-wracking […] I heard and felt the explosion but didn't know where it came from," said local Isabel Romero, whose eight-year-old son is a student at a school next to the building where the explosion occurred.

"All of the windows in one of the classrooms shattered and the children were very shaken."

Firefighters were still on the scene late in the evening, with Madrid's Emergency services tweeting: "The [building's] state has yet to be determined […] and gas is burning at a controlled rate." 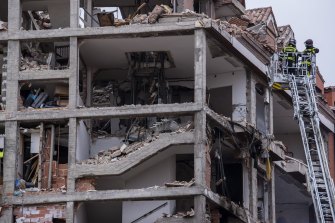 Firefighters inspect the debris caused by an explosion in downtown Madrid, Spain.Credit:AP

Electrician David Santos Muñoz, a 35-year-old father of four, was identified as one of the dead, Madrid's Archdiocese said in a tweet, saying he had gone to the parish-owned building earlier in the day to lend a hand.

The building was a complex which provided residential training for priests and also gave meals to homeless people, a neighbour said.

The top five floors were totally destroyed, with walls blown out, while the bottom two floors were still mostly intact, but charred in places from the flames.

Of the 11 people wounded, four were hospitalised, one with severe thoracic and orthopaedic injuries and whose condition was deemed grave.

After the blast, rescue workers evacuated elderly people from the nursing home.