EXCLUSIVE: ‘Why should we be afraid? This is our home’: Defiant residents in port city of Odesa dig in to protect their homes and vow to stay put as they brace for attack from Putin’s forces

Defiant residents living on the front line in Odesa are refusing to leave their homes and digging in to protect themselves from an imminent Russian invasion.

While Kremlin warships test the port’s defences with regular bombardments volunteers are gathering supplies for Ukraine’s armed forces and old people are keeping calm and carrying on.

In normal times the 72-year-old Igor Igorovych lives in one of the most sought-after streets in Odesa, a stone’s throw from the famous Opera Theatre and with views of the Black Sea.

Now his third-floor apartment in the historic centre is surrounded by sand-bag gun emplacements, manned by heavily-armed soldiers and with barbed-wire and tank traps littering the pedestrian walkways. 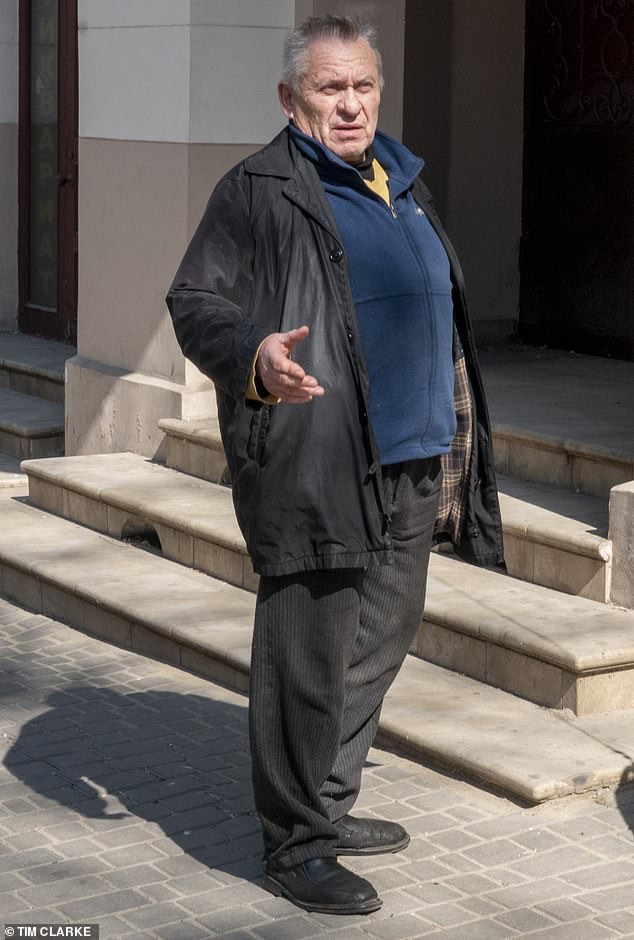 While Kremlin warships test the port’s defences with regular bombardments volunteers are gathering supplies for Ukraine’s armed forces and old people are keeping calm and carrying on. Pictured: 72-year-old Igor Igorovych who is staying put in Odesa

The retired school-teacher told MailOnline: ‘We are not afraid of the Russians. We live here and we are not leaving.

‘The soldiers told us to leave – for our own safety.

‘But everyone in the building refused to leave.

‘Why should we be afraid? This is our home.’ 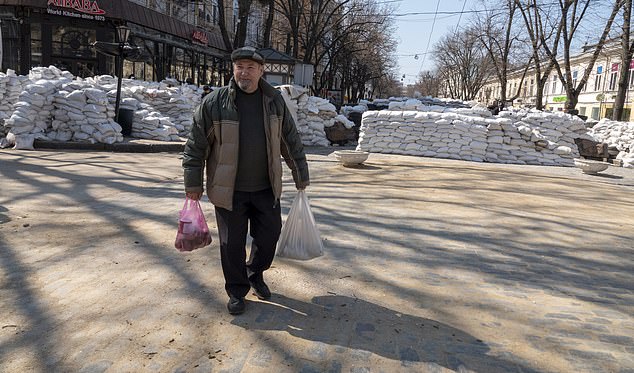 Further along the road his neighbour, Tymofei Emelianovych (pictured), is not budging either. The 80-year-old former Red Army soldier turned theatre comedy actor told MailOnline: ‘Why should I be frightened this is my home’ 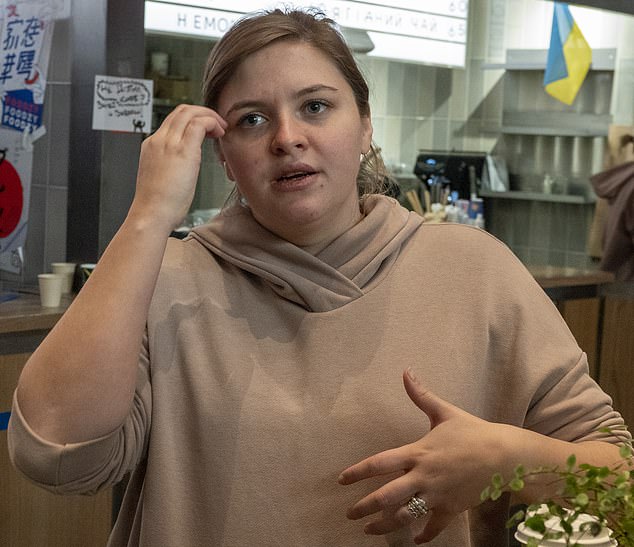 Meanwhile across the road a group of young women set up a humanitarian aid group, known as Odesa Angels, to make sure the soldiers protecting Odesa have everything they need. Together with her friends, entrepreneur Stephaniia Sahaidak (pictured) gather food, clothing, medicines and washing products to supply troops on the front-line

Further along the road his neighbour, Tymofei Emelianovych, is not budging either.

The 80-year-old former Red Army soldier turned theatre comedy actor told MailOnline: ‘Why should I be frightened this is my home.

‘I was born in Odesa and I plan to die in Odesa. 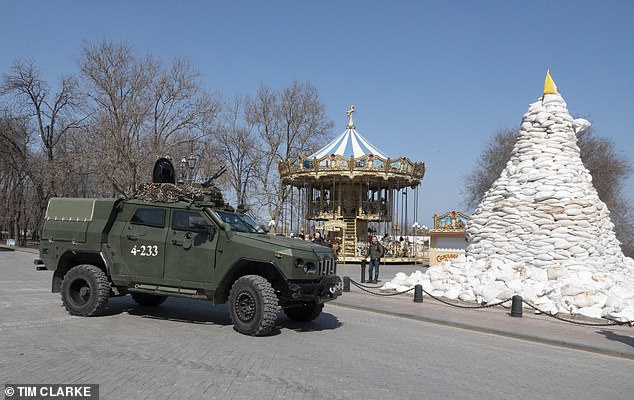 Pictured: Sand-bag gun emplacements and a military vehicle in Odesa, where residents are refusing to leave

‘I am not afraid of the war because I was in the Red Army.

‘I was a tank soldier. I was stationed in [east] Germany

‘But now I work at the theatre. I like to make jokes.’ 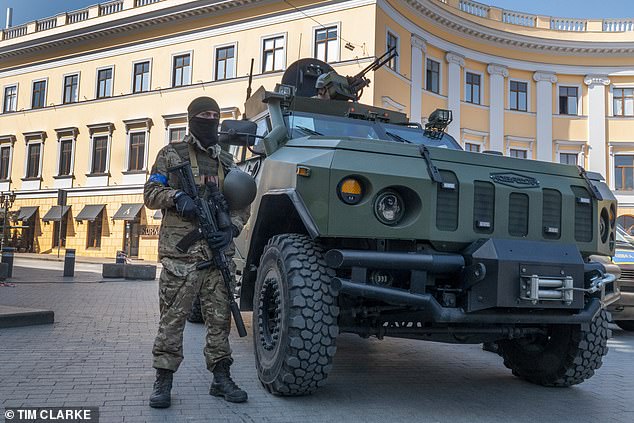 Pictured: A soldier stationed next to a military vehicle in Odesa, Ukraine today

Tymofei confessed that the new army defences did get in the way.

He said: ‘My wife Sofia is waiting for me.

‘I told her would only be out for an hour to do the shopping.

‘But because of all the road blocks it has taken me two hours.’ 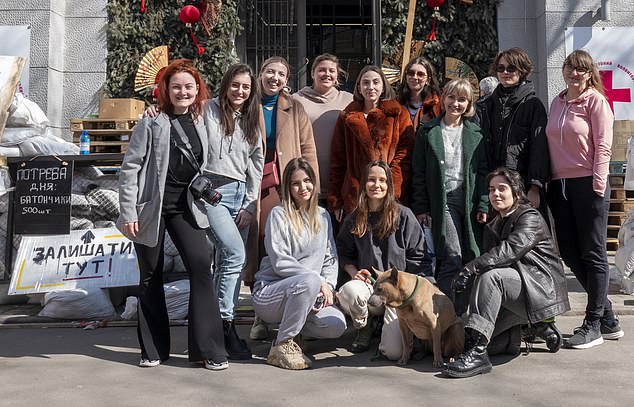 Pictured: The Odesa Angels, who set up their group to ensure that soldiers protecting Odessa have food, clothing and washing products

Meanwhile across the road a group of young women set up a humanitarian aid group, known as Odesa Angels, to make sure the soldiers protecting the city have everything they need.

Together with her friends, entrepreneur Stephaniia Sahaidak gather food, clothing, medicines and washing products to supply troops on the front-line.

Stephaniia, 26, explained: ‘We make sure that the soldiers on the front-line that is defending Odesa have a hot meal, are kept warm, have the medicines they need and have soap to wash themselves.

‘We are a group of friends who got together to help in any way we can.

‘So, we raise money and we ask for donations to support our boys.

‘The government does it’s best for our troops. But often the supplies get there too late. 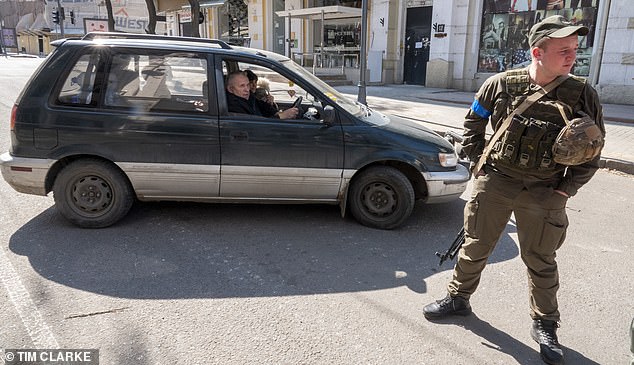 Pictured: Igor Igorovych with his neighbour driving out of the historic centre of Odesa while a soldier is stationed in the street to protect the city 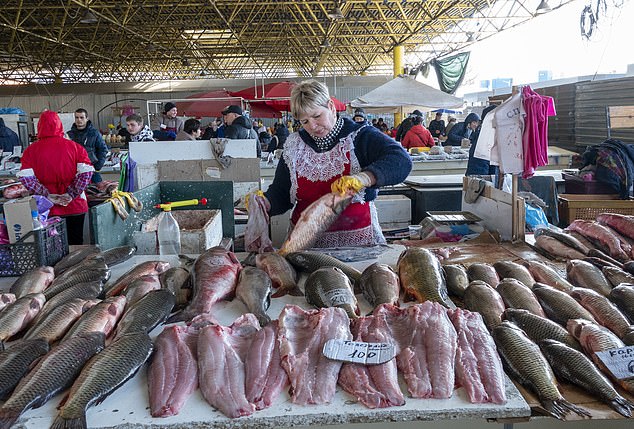 Pictured: Residents in Odesa visit to a local market as a seller sorts through her products today

‘So now the local commanders tell us what they need and we get it to them.

‘And of course the boys on the front-line, who are defending Odesa, are our first priority.’

Over-looking the sea, in nearby Taras Shevchenko Park, retired merchant seaman Valeriy (pictured) is equally defiant. He told MailOnline: ‘I am not leaving Odesa. This is my home.’ 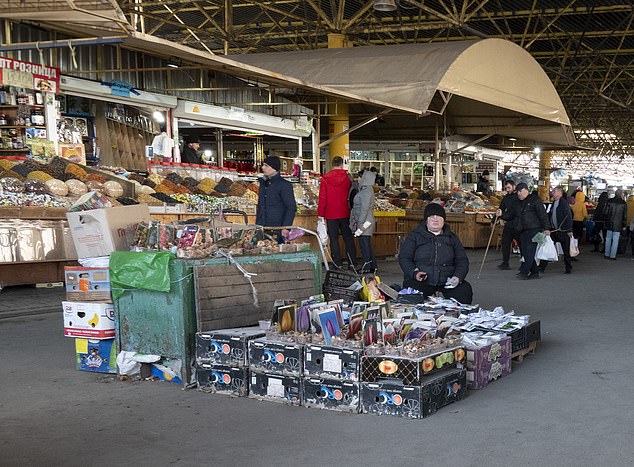 Pictured: People in Odesa walk around their local market while stall holders watch on today 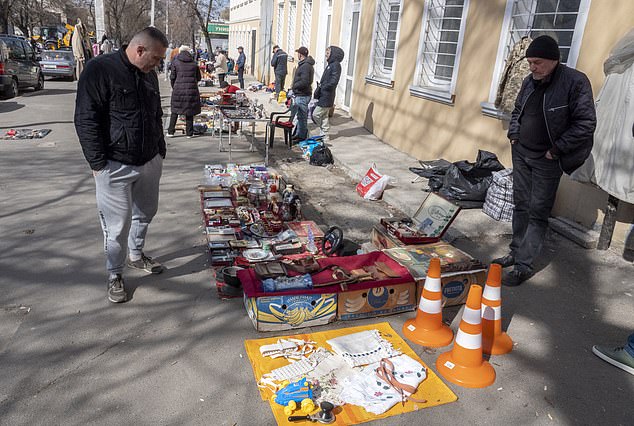 Pictured: People walk around the city looking at stalls on the street today in Odesa 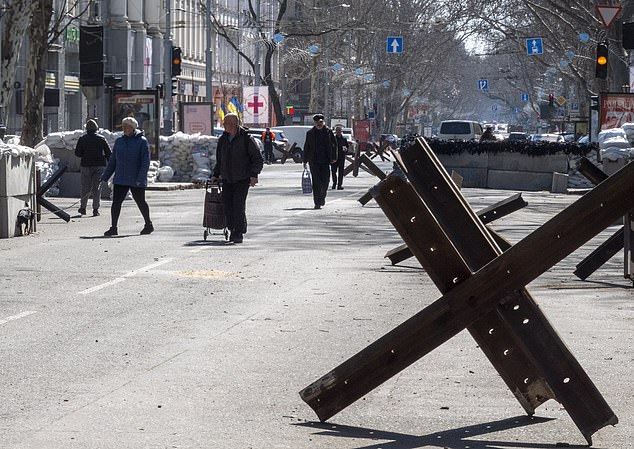 Pictured: Residents walk through Odesa as defences are seen to protect the city from bombardments

He told MailOnline: ‘I am not leaving Odesa. This is my home.

‘There are Russians out in the sea. They come and they go.

‘But they are only small ships, frigates. 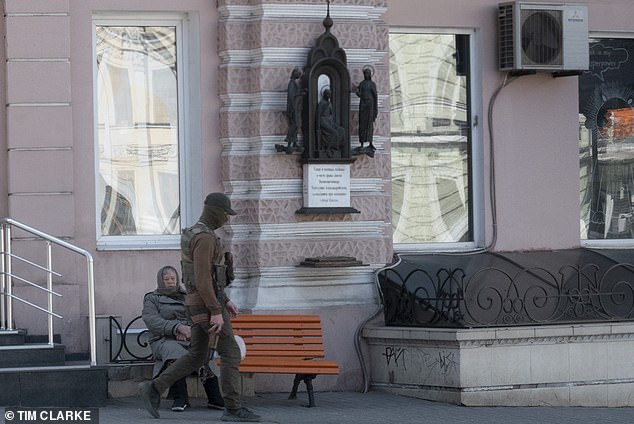 Pictured: A resident sits on a bench in Odesa as an armed Ukrainian soldier ready to protect his city walks past her today 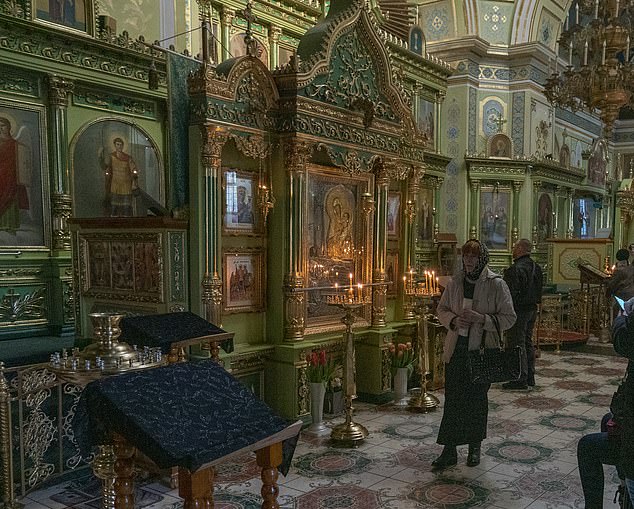 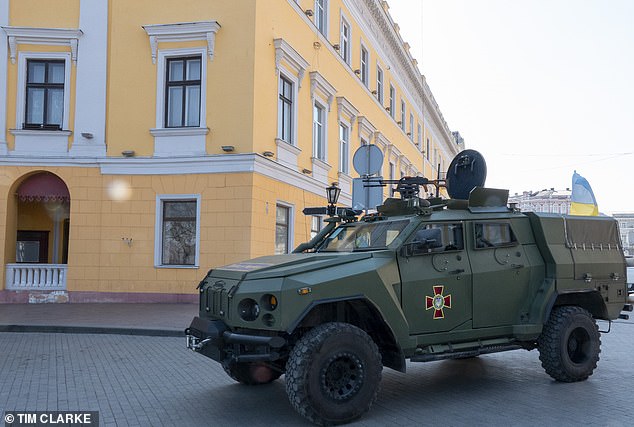 Pictured: A Ukrainian military vehicle is stationed in Odesa to protect the city from the Russian invasion

‘They fire at Odesa to prompt a response from our navy.

‘They want to know where the Ukrainian ships are so that they can attack them.

‘But our navy refuses to give away its location.’ 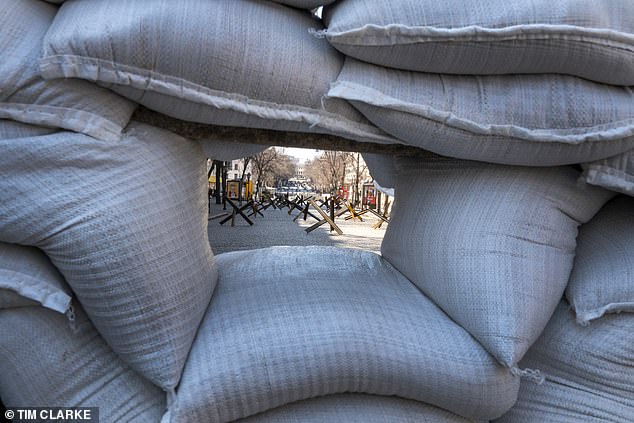 Pictured: Sand-bags are stacked up to protect the city of Odesa from Russian bombardment

Olena Lolesnyk, 30, and Kamila Suleymanova, 33, are part of a unit of Ukraine’s 3014 Army that is the final line of defence for Odesa – a long-held prize of the Kremlin.

‘I am prepared to kill to protect my city, my family, my country,’ blonde-haired Olena told MailOnline, after she collected a bravery award from the city mayor.

‘I try not to think about whether I might die, but I am prepared to give my life to protect everything I love.’

Kamila added: ‘My mother does not know that I have joined the army.

‘But we have to defend our land. It is for our children.’ 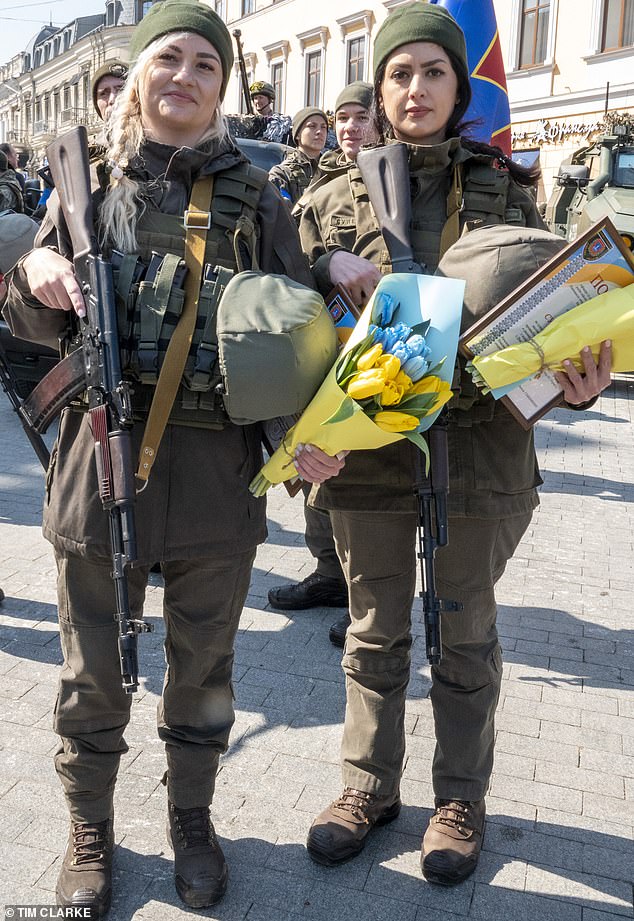 Olena Lolesnyk (left), 30, and Kamila Suleymanova, 33, are part of a unit of Ukraine’s 3014 Army that is the final line of defence for Odesa – a long-held prize of the Kremlin

The pair were speaking after they attended a military ceremony to honour Ukraine’s National Guard.

Dressed in khaki-green uniforms, body armour, tin hats, and carrying Kalashnikov assault rifles, they stood shoulder to shoulder with their male comrades, as a military band played the Last Post.

The parade was held next to a famous statue of Russian Tsarina Catherine the Great, who founded the city in 1794.

But now this symbol of the Russian Empire is covered in sand-bags and surrounded by Ukrainian military hardware to protect it from the Kremlin warships that threaten to reduce the historic port to rubble. 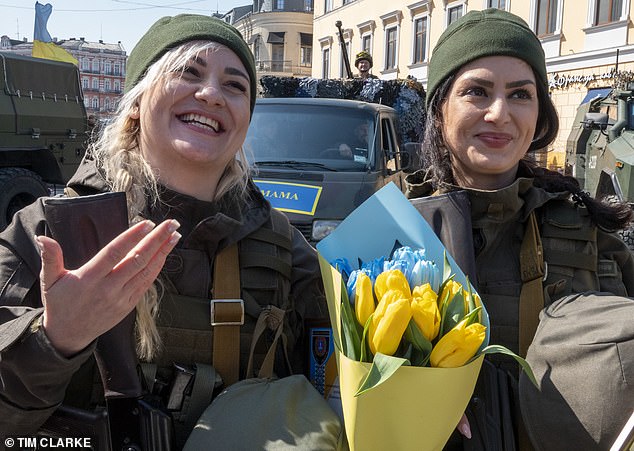 Formally the fourth most important city in the Russian Empire, and with huge strategic value as Ukraine’s main sea port, Odesa is a major Kremlin goal.

And the Ukrainian Army is on high-alert of a coordinated Normandy-style beach landing and parachute assault that could surround the city on three sides.

So ordinary citizens – like the two mothers – have taken up arms in their droves to defend their homes.

Back on parade, Olena revealed she does not know who will look after her nine-year-old son David if she is killed. 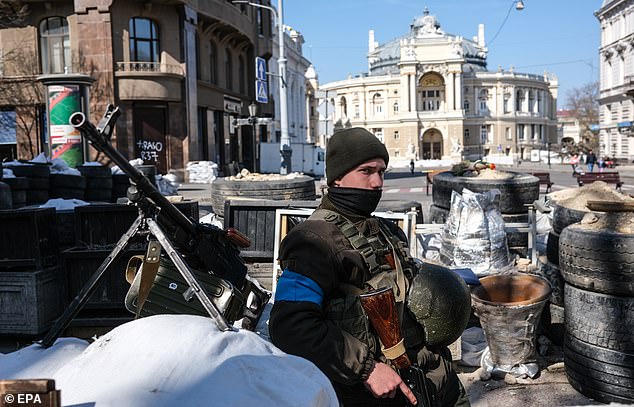 A Ukrainian soldier guards in front of the Odesa National Academic Theatre of Opera and Ballet and one of the city’s symbols, behind a heavy barricade in Odesa, Ukraine yesterday

Her mother is dead and she split up from his father a long time ago.

But the 30-year-old, who usually works for a trade union, says she had no other choice than to help defend the city.

She said: ‘This is my duty.

‘At the moment I work in the army stores.

‘But my unit is based here in the city of Odesa so if the Russians invade I will shoot them from the barricades.

Kamila, who used to work for the city council, said she felt she had no choice but to join the army.

She said: ‘My son Daniel is 12 years old. I have to protect Odesa for him, for his future.

‘I used to work in an office but now I go on patrol and man a post with my unit.’

Megan McKenna opens up about ‘rough childhood’ after...