London: Sisay Lemma enjoyed one of the best days of his sporting life on Sunday as he became the first person to cross the finish line of the 2021 London Marathon. 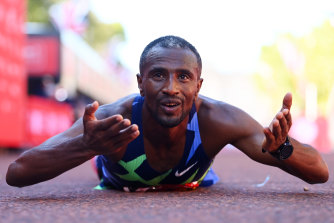 But his euphoria upon bursting through the tape was short-lived after he was whisked away by handlers over fears that he could infect his fellow medal holders with COVID-19 if granted access to the winner’s podium.

Despite allowing the Ethiopian runner to compete in the race, organisers forbade him from officially being awarded his medal because he came into contact with a positive COVID case the night before. Lemma is fully vaccinated and received a negative lateral flow result before the starting pistol was fired for the run.

Moments after the 30-year-old winner crossed the finish line, he was bundled into a car and packed off to his hotel in what marathon bosses termed a “precautionary measure”.

The elite athlete was forced to send a 67-year-old agent as a stand-in to receive his trophy on the podium.

Finishing the 42-kilometre race in a blistering time of 2:04:01, he became the sixth-fastest man ever over the course. However, spectators were instead treated to the sight of Lemma’s bemused agent, Gianni Demadonna, waving the bouquet of flowers and shining trophy to the cameras. 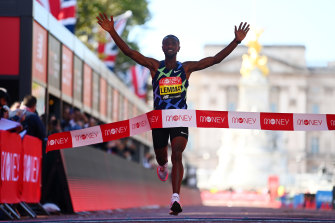 Sisay Lemma of Ethiopia crosses the London marathon finish line, before handlers took him away on fears he could infect other medallists. He was a casual contact of a confirmed COVID case.Credit:Getty Images

A philosophical Lemma said: “Today was the biggest win of my career and a dream come true for me. I came third last year here in London and to return 12 months later and to win this great race is an incredible and proud moment.

“Of course, I would have loved to have celebrated my win by standing on top of the podium, but I completely understand why this was not possible.

“We are living in challenging times and I am just grateful that it was possible for me to run today and experience the greatest moment of my career.

“I hope that I will have plenty of future opportunities to stand on top of a podium and I look forward to coming back to London next year.”

London Marathon officials explained that Lemma was taken to his hotel after the race as a precaution “along with two other athletes closest to Kinde Atanaw”, who was withdrawn after testing positive for COVID-19 on Friday.

They added that Lemma and the two other athletes tested negative in daily rapid molecular COVID-19 tests before the race.

A spokesman for the Department of Health confirmed that Lemma had been double vaccinated before competing.

It also emerged that a two-second wave to his supporters in the final strides of the race cost him £18,500. Finishing in under two hours four minutes would have earned him the extra sum on top of his prize winnings of £40,000.

Among the runners was the former British health secretary Matt Hancock who gave a thumbs-up after crossing the finishing line.

Jonathan Ashworth, the shadow health secretary, had wished Hancock who ran for his local hospice all the best, but jokingly added, “obviously don’t agree with him politically but hope the run goes well (wish I was running now just so I could beat him!).”

The newlywed two-times Olympic rowing champion James Cracknell, who finished in just under 2:55, said: “I think it is the biggest testament to what people have done over the last year.”

Last year’s London Marathon was replaced by a virtual run in which participants chose their own route and a further 40,000 participants will earn their medal by taking part in the virtual event this year.

There was also no bag drop at the start and runners were instead asked to leave any belongings at the finish line at the ExCel centre when they collected their number.

There were no volunteers hanging medals around the necks of finishers, who instead found their medal in their London Marathon bag.