At least 70 per cent of the population will need to be vaccinated before coronavirus can be allowed to circulate in the community, or Australia will risk a third wave that will see hospitals overrun with younger patients.

Key infectious diseases experts have warned that it would be foolhardy to vaccinate only the most vulnerable groups before fully reopening international borders. 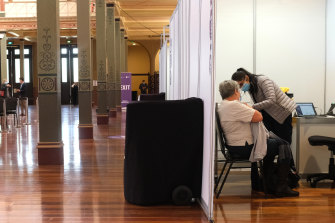 Vaccination rates need to be higher.Credit:Getty

“There’s still this Greek chorus of people saying ‘we have to open up’ and we do,” said Professor Nancy Baxter, the head of the Melbourne School of Population and Global Health.

But Professor Baxter said that while the death rate would be lower once the most at-risk people had been vaccinated, it would not prevent deaths nor even another wave of the virus in Australia.

“The hospitals will still need to shut down. Their ICUs will be full of people in their 40s,” she said

Professor Robert Booy, a senior fellow at the National Centre for Immunisation Research and Surveillance, said Australia needed at least a 70 to 80 per cent uptake of the vaccine before he would be confident that virus transmission would be minimal and not likely to cause a third wave. 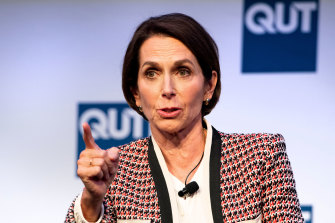 Jayne Hrdlicka has sparked outrage over her call for borders to be reopened even if “some people may die”.Credit:

More than 3.1 million coronavirus vaccine doses have been administered so far in Australia, which has a population of more than 25 million people. The government has so far refused to reveal how many people are fully vaccinated against the virus.

Most of the promised 45 million doses of the Moderna and Pfizer vaccines are not expected to start arriving until late in the year and it remains unclear when most people will get their vaccine.

Last month, the Prime Minister refused to put a deadline on the goal of inoculating the bulk of the population, after one of his senior ministers said the aim was for every adult to receive their first vaccination by Christmas.

Professor Fiona Russell, a vaccine adviser to the World Health Organisation, estimates that the optimal vaccination coverage target, where Australia had enough immunity to safely open its borders to other countries, was somewhere between 60 and 85 per cent of the population.

The Murdoch Children’s Research Institute epidemiologist formed her estimate by examining outcomes in countries with some of the highest vaccination rates.

The small British territory of Gibraltar, home to roughly 33,000 people, has vaccinated more than 85 per cent of its adult population and has not recorded a case since it completed its vaccination program in March.

But one of the world’s most vaccinated countries, the Seychelles, is currently experiencing an out-of-control coronavirus outbreak, despite roughly 61 per cent of the adult population on the East African island being immunised.

Professor Russell said this could be due to pockets of high coverage and very low immunisation rates in other areas of the island and that it acted as a warning for countries with high levels of immunisation.

“We only have to look at what is unfolding in India and surrounding countries like Nepal and Sri Lanka … the virus is sparking up again and it’s also shooting right up in Singapore,” she said. “It’s all going a bit pear-shaped and this is all around us … right on our doorstep.“

Professor Gregory Dore, an epidemiologist at the Kirby Institute, said it was “eminently sensible” to drop the one-size-fits-all approach to COVID-19 quarantine and move towards a stratified system with different levels of protection for different levels of risk.

But he warned even if 70 per cent of Australia’s adult population were to be fully vaccinated, there would still be breakthrough cases as the international borders reopened further.

“There still could absolutely be infections and small to moderate outbreaks, but when you’ve large portions of the population protected, you’re not going to get those massive sort of escalating exponential epidemics because there should be enough immunity in the community,” he said.

“If we knew the borders were going to open on January 1 next year, I think every Australian knows they’ve got to get vaccinated, fully vaccinated, before January 1,” he said.

Professor Baxter, a clinical epidemiologist at the University of Melbourne, has watched from afar as a third wave of the virus struck her hometown of Toronto in Canada, where she said authorities had managed to vaccinate vulnerable aged care residents, leading to much lower death rates overall compared to previously.

So far, almost 19 million doses of vaccine have been administered across Canada, which has a population of about 38 million people.

“This is a system that is like Melbourne,” she said. “Two hospitals almost ran out of oxygen.

“That’s what you’re looking at if we decide to open up when we are at 50 per cent vaccination.”

The federal Health Department and the Prime Minister’s office were contacted for comment.