Glastonbury through the decades: Fascinating pictures of Britain’s foremost music festival since its 1970 debut the day after Jimi Hendrix died show that it didn’t rain EVERY year

Since its debut in 1970 Glastonbury has attracted thousands of eager music fans to support their favourite artists come rain or shine.

But how much has the festival changed over the past 50 years? From tickets sold at just £1 for only 1,500 campers at the Somerset festival’s first year to the dizzying heights it has reached today, Glastonbury has grown to something bigger than its creator Michael Eavis could have expected.

In 1970 the headline acts were Marc Bolan and Keith Christmas with 1,500 guests getting in for £1, a ticket which included free milk from the farm.

By 1981 a new Pyramid stage had been built – a permanent structure which doubled as a cowshed and animal food store during winter months. That year’s festival was held to raise money for the Campaign for Nuclear Disarmament.

Ticket prices only went up to £8 but Michael Eavis was able to hand over £20,000 to CND. Headliners that year included New Order and Gordon Giltrap who performed for 18,000 festival-goers.

In 1990 the festival took the name of Glastonbury Festival for Contemporary Performing Arts to reflect the diverse attractions at the event. The festival ended with 235 arrests of travellers who looted the emptying campsite.  Ticket prices were hiked to £38 and headliners including The Cure and the Happy Mondays played for a crowd of 70,000.

By 2000 more camping space had been added, including a family campsite. An outdoor dance venue was created and although a large influx of gatecrashers attended the campsites held up.  Headliners including the Chemical Brothers and David Bowie played for 100,000 festival-goers who purchased tickets for £87.

In 2010 some 135,000 people attended, purchasing tickets for £185. Prices were raised even further this year with a Glastonbury ticket setting music fans back a whopping £285 to camp for the weekend alongside 203,000 others. 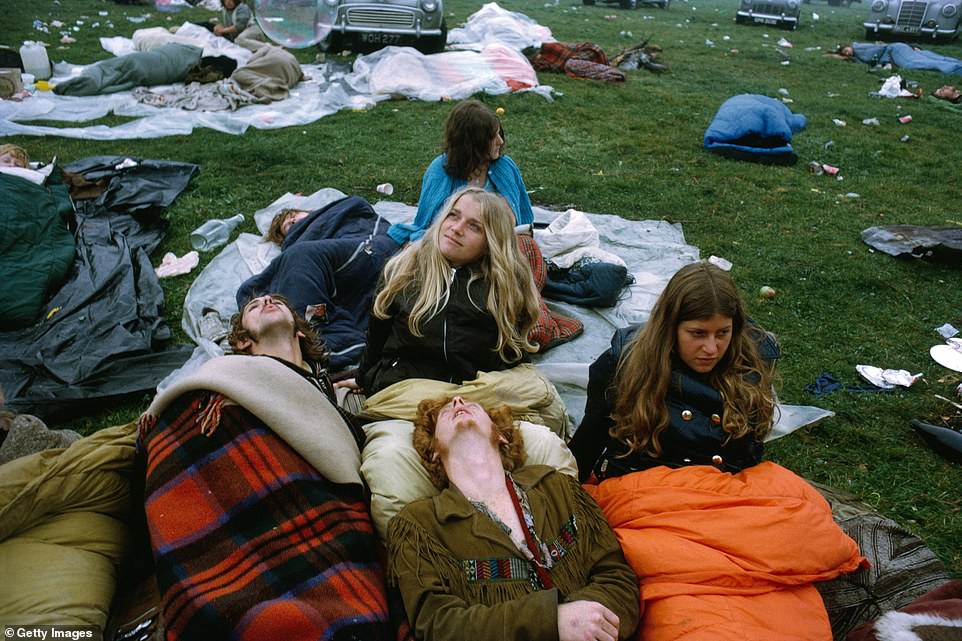 A group of festival goers lie together under blankets and sleeping bags at the first Glastonbury Festival, United Kingdom, September 1970. This year the headline acts were Marc Bolan and Keith Christmas with 1,500 guests getting in for £1, a ticket which included free milk from the farm 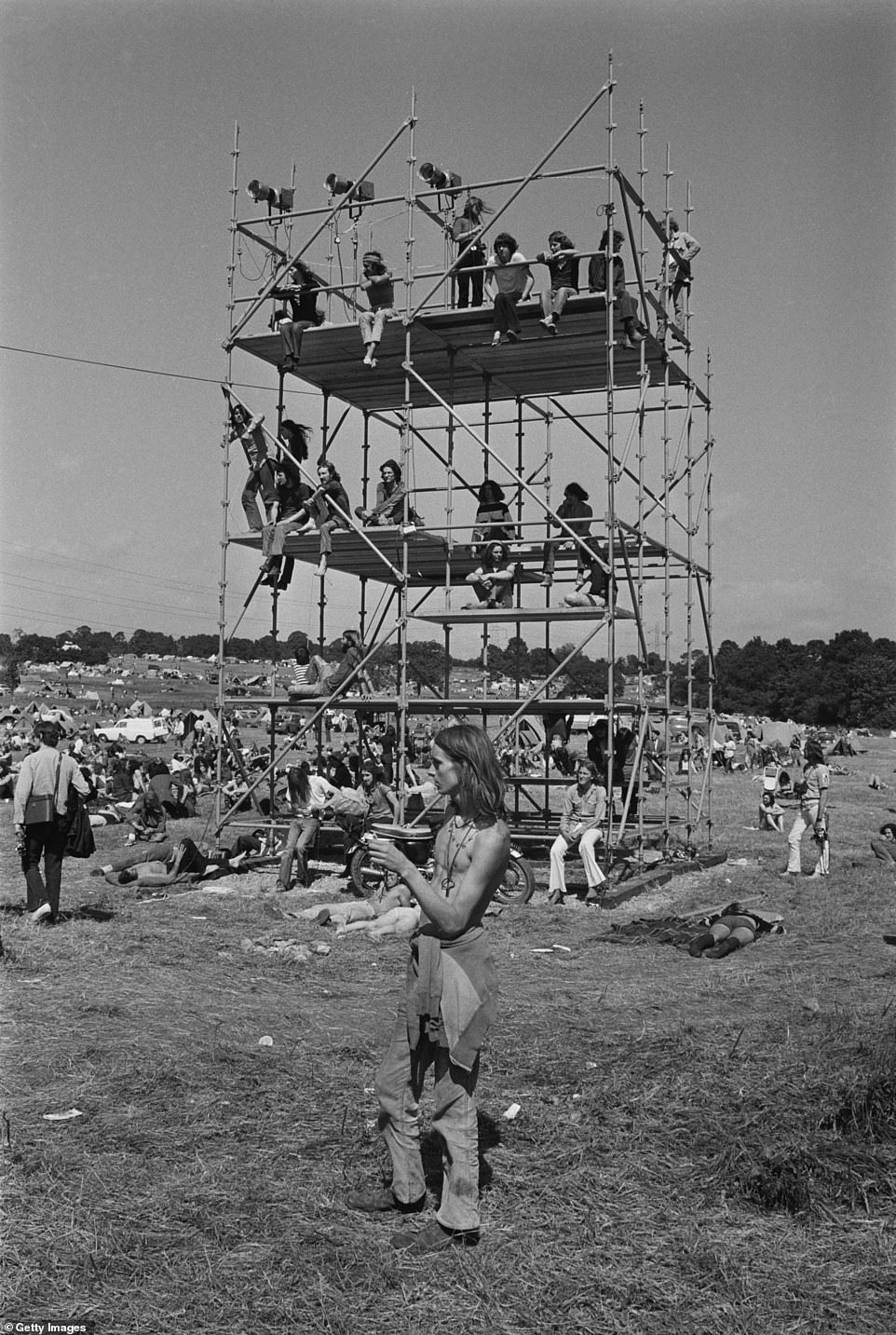 Hippies at the Glastonbury Fair music festival in 1971. The Festival moved to the time of the Summer Solstice and was known as the ‘Glastonbury Fair’. It was in this year that the first ‘pyramid’ stage was constructed 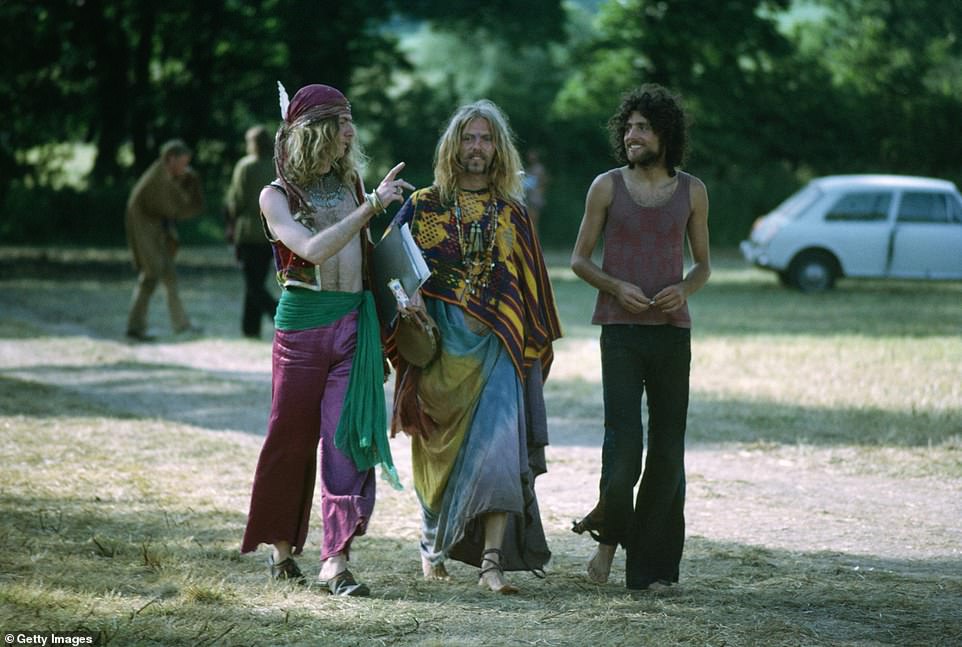 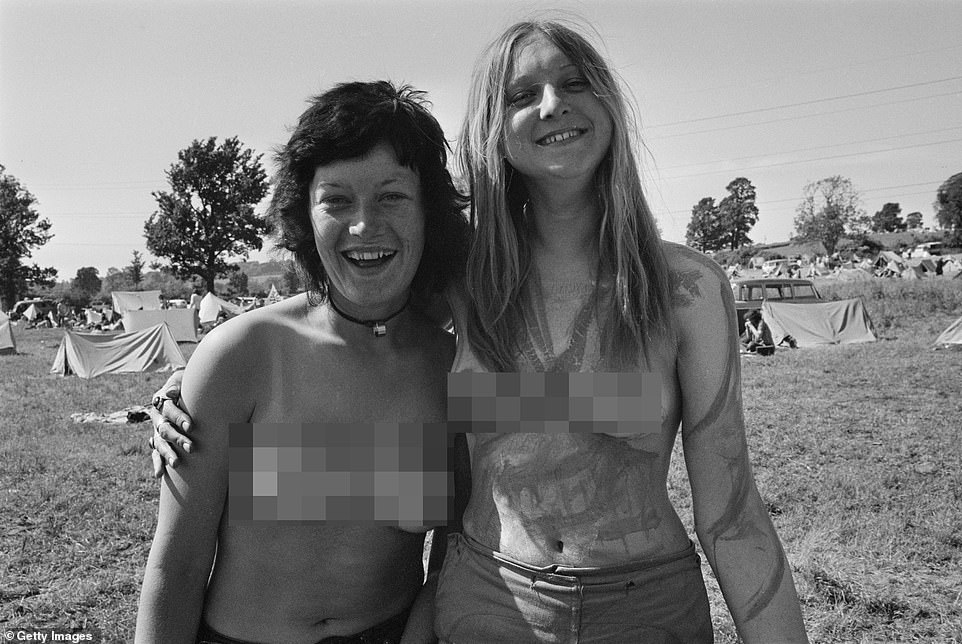 Two topless women, one wearing body paint, at the Glastonbury Fair music festival in 1971. This year It had been planned by Andrew Kerr and Arabella Churchill who felt all other festivals at the time were over-commercialised 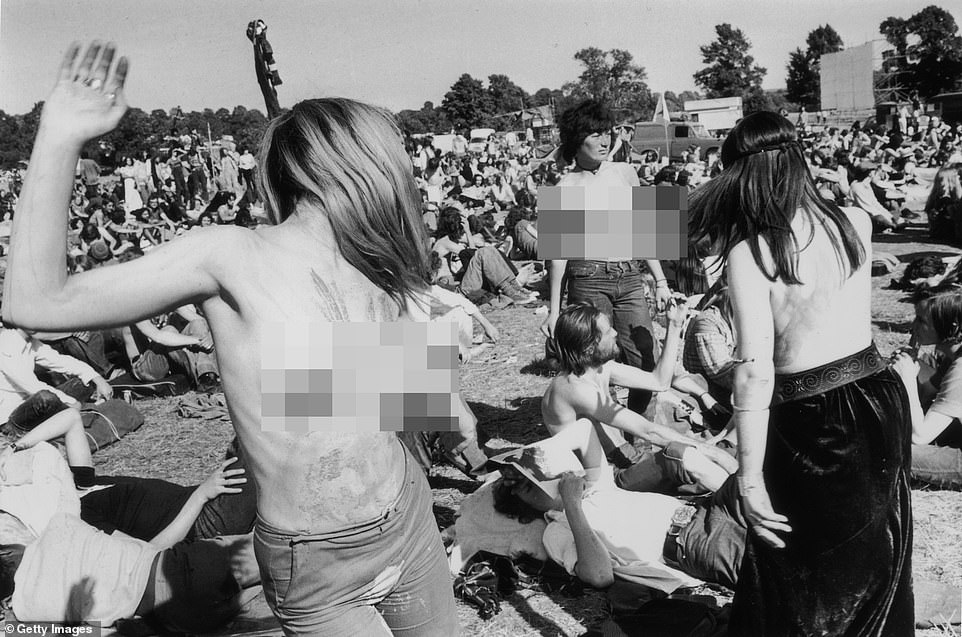 Topless hippies enjoying the sunshine at the second Glastonbury Fair in 1971. It was paid for this year by the few who supported the ideal so the entrance was free and took a medieval tradition of music, dance, poetry, theatre, lights and spontaneous entertainment 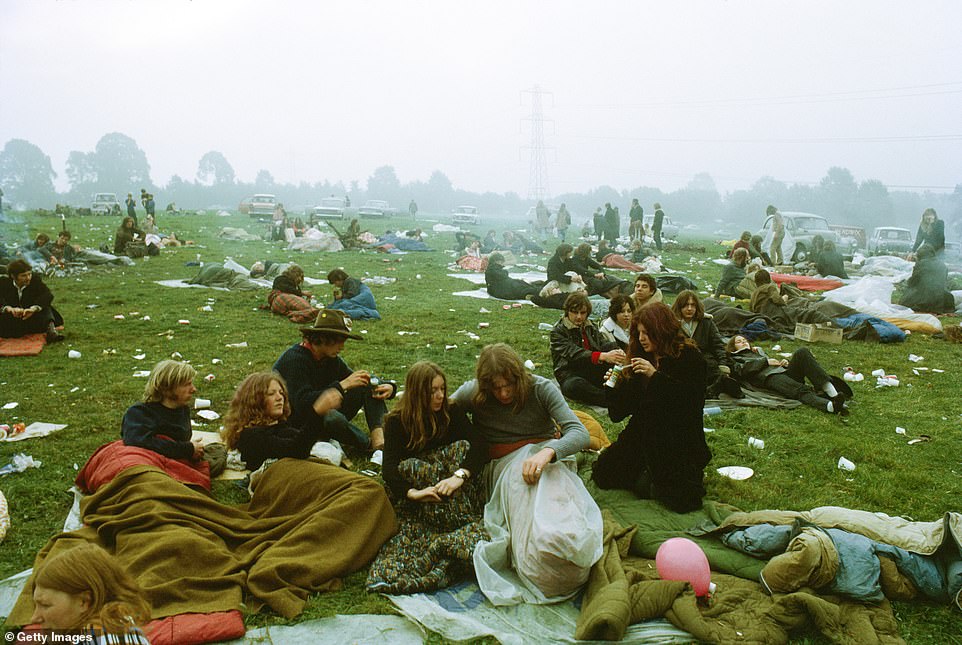 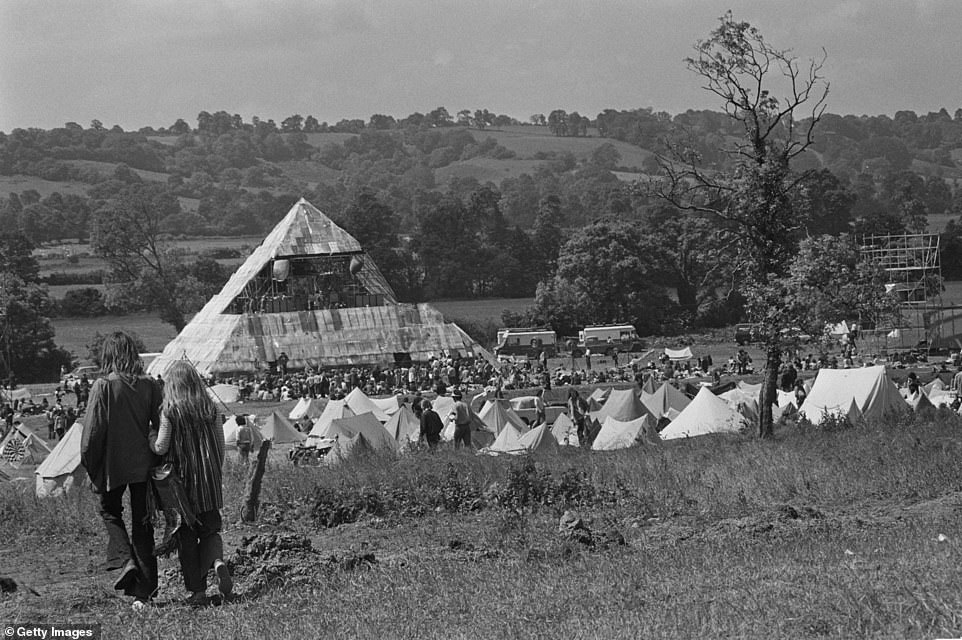 A view of the Glastonbury Fair music festival in 1971, which saw the first use of a pyramid stage which was constructed out of scaffolding and expanded metal covered with plastic sheeting 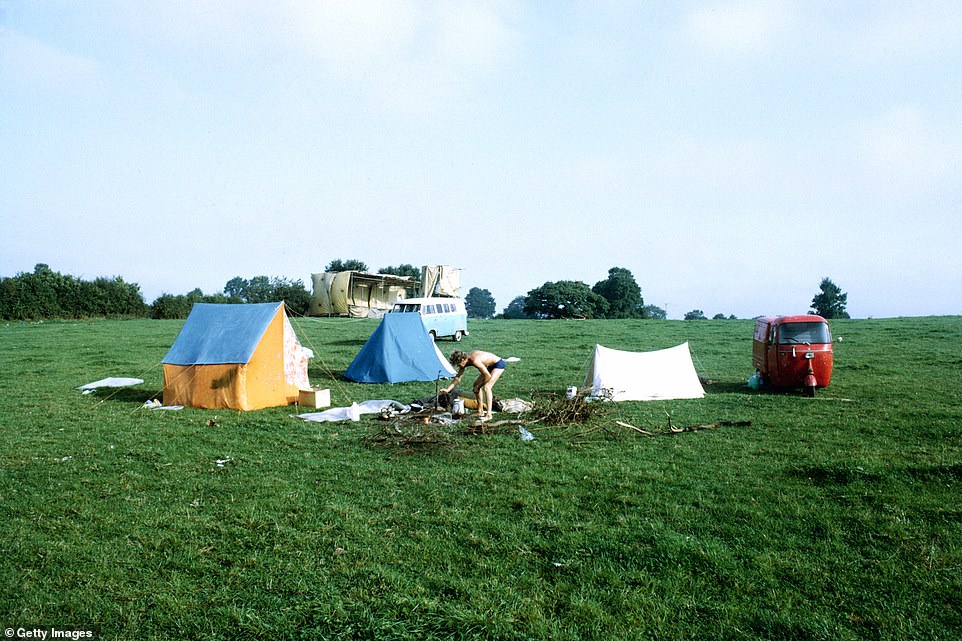 A man tends a campfire wearing only his underpants next to a group of tents and with a camper van and the stage visible behind him in the camping area at the first Glastonbury Festival, United Kingdom, September 1970 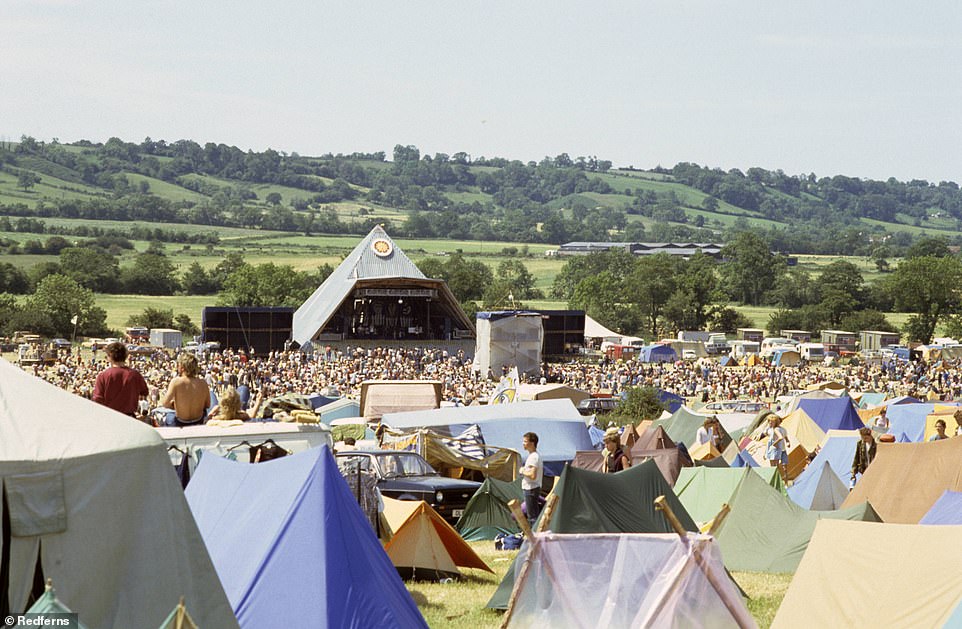 A general view of crowds in front of the original Pyramid stage at Glastonbury Festival in 1983. Mendip District Council issued a Public Entertainment Licence this year which set a crowd limit of 30,000. Attendance: 30,000. Tickets: £12 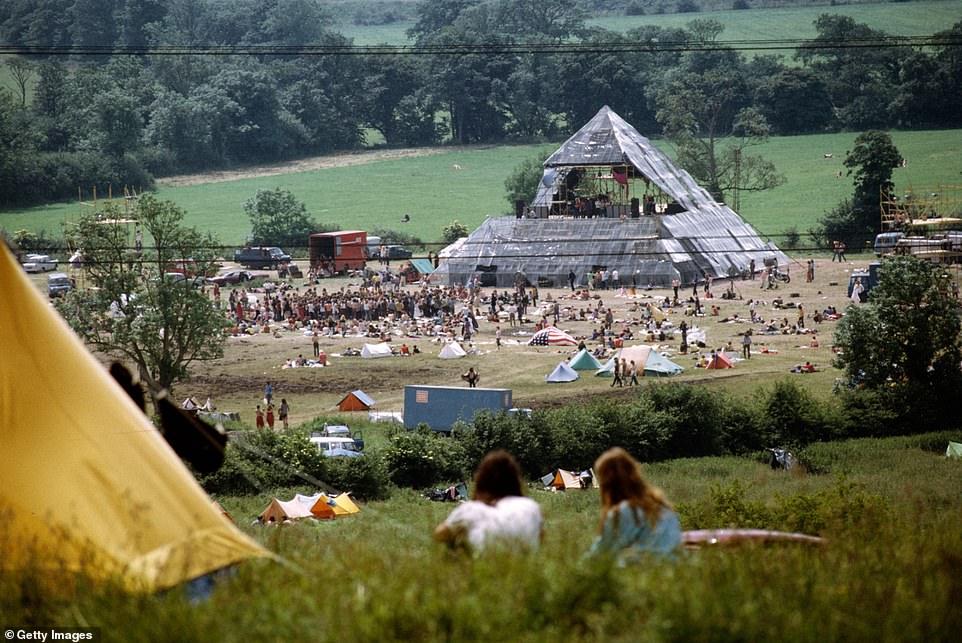 A wide shot of the Pyramid stage and its setting, Glastonbury Fair in 1971. Just 12,000 people attended the festival this year so there was much more room for people to roam and camp freely 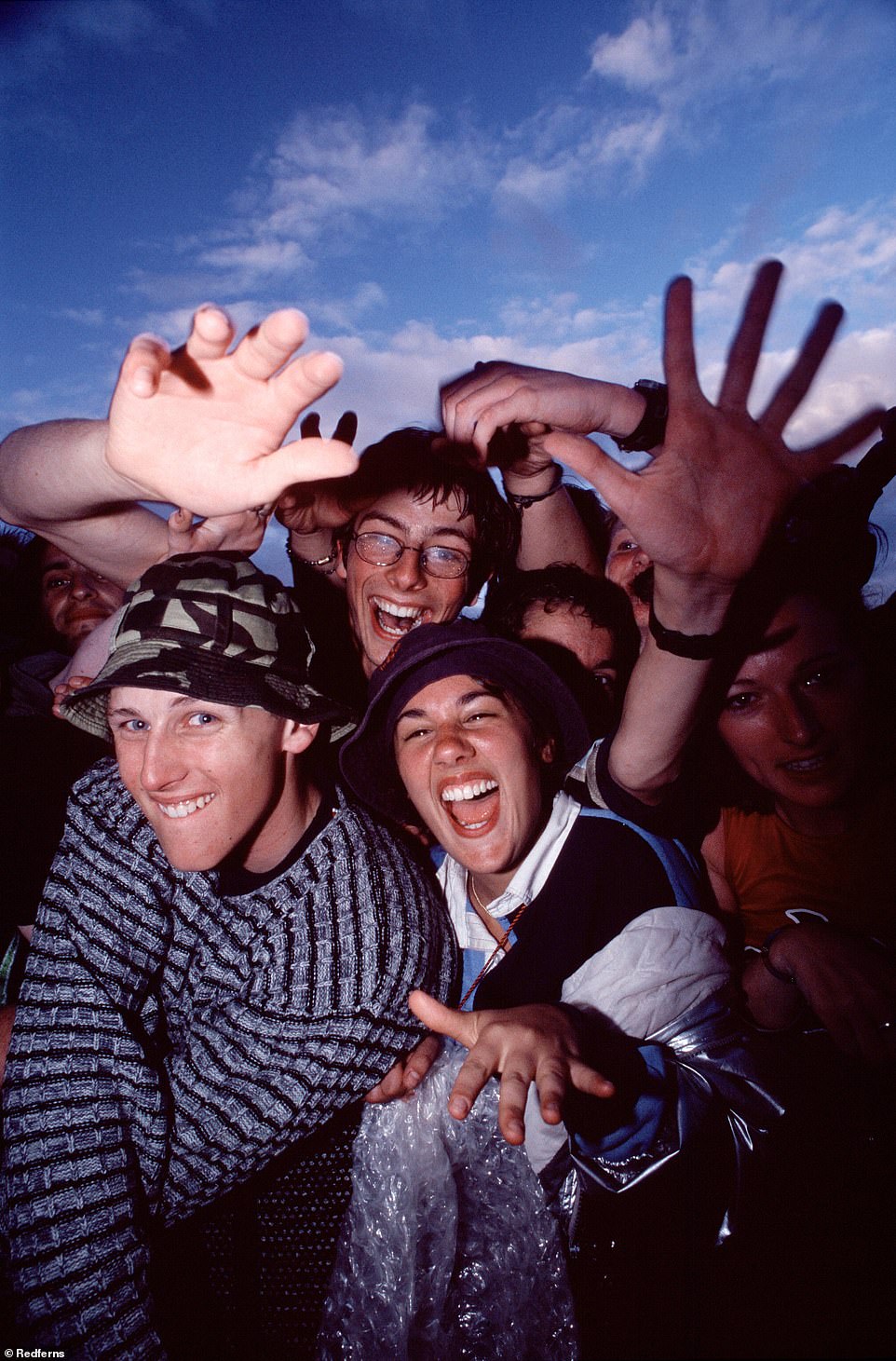 Festival goers waving to camera at Glastonbury in 1990. The festival took the name of the Glastonbury Festival for Contemporary Performing Arts for the first time, to reflect the diversity of attractions within the Festival. Acts included: The Cure, Happy Mondays, Sinead O’Connor and World Party. Attendance: 70,000. Tickets: £38 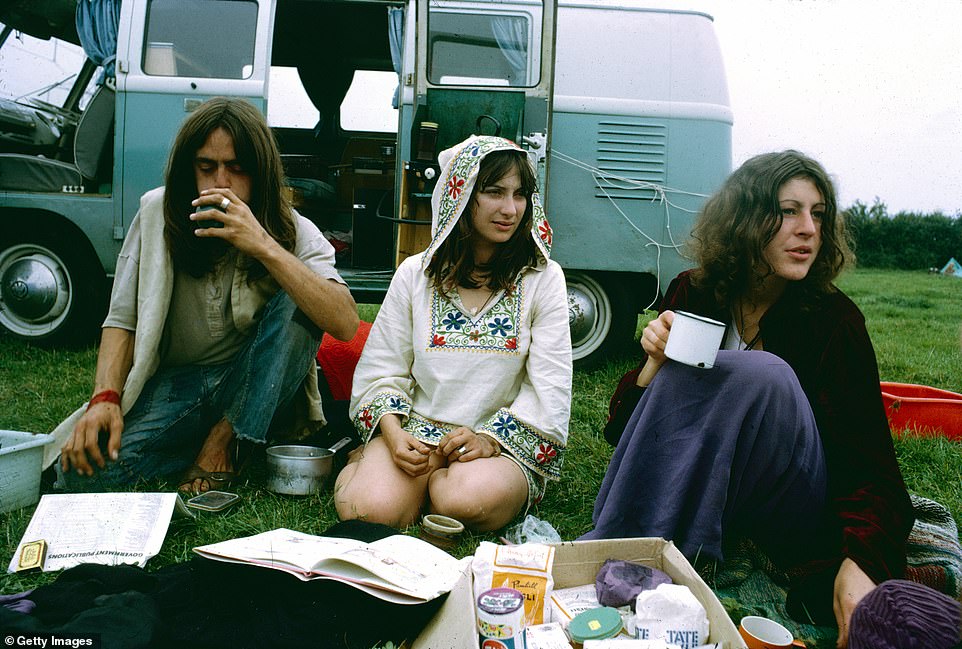 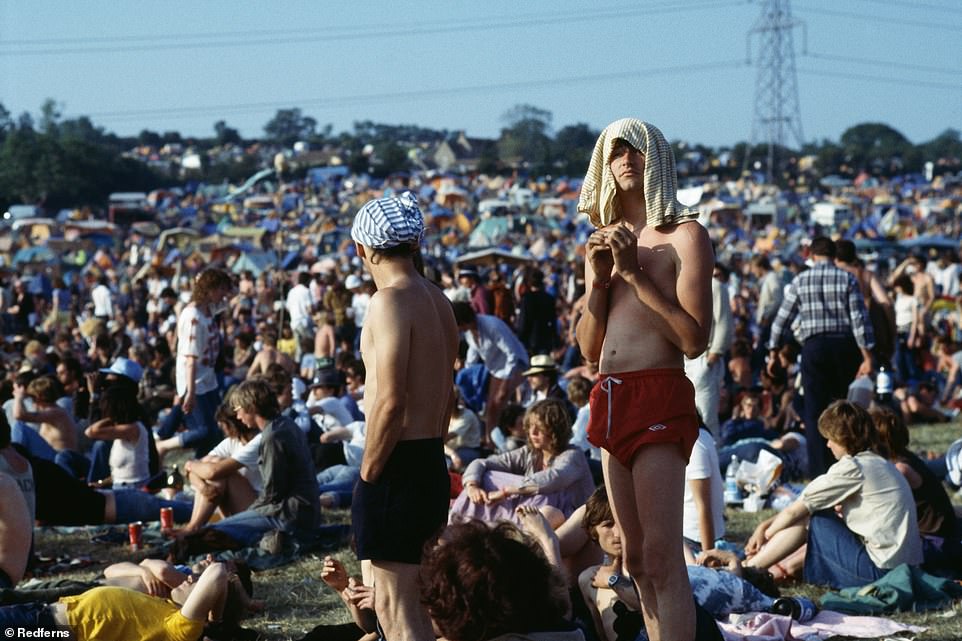 Audience members in front of the Pyramid stage at the Glastonbury Festival in June 1983. It was also the first year that the Festival had its own radio station, Radio Avalon. Acts included: Marillion, The Beat, UB40, Curtis Mayfield 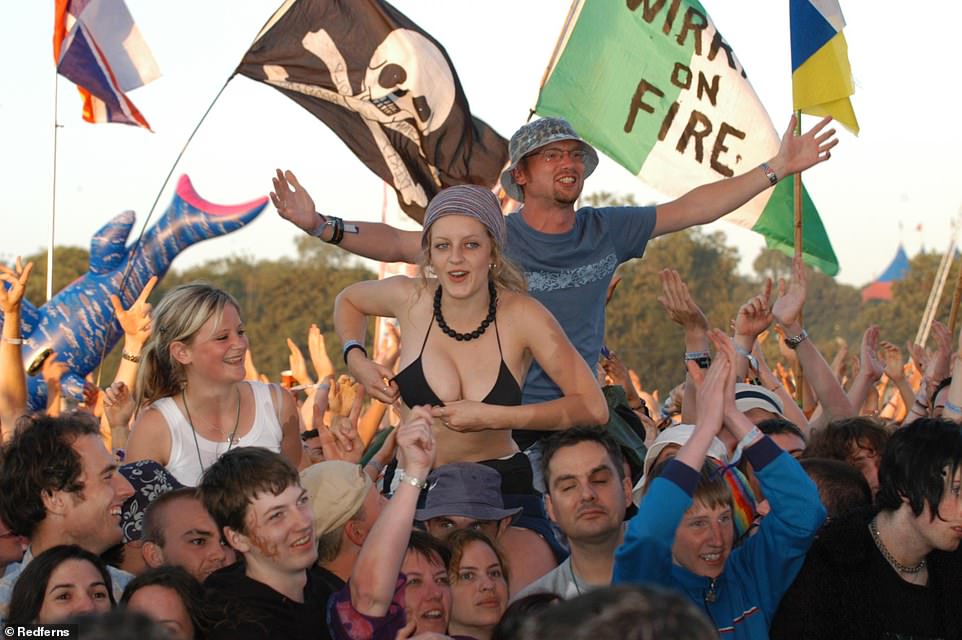 Two people sitting on shoulders above crowds at Glastonbury Festival, cheering, with flags in 1990. This was the first year that a professional car parking team was employed to encourage the best use of space. Donations of £100,000 were made to CND and other local charities. 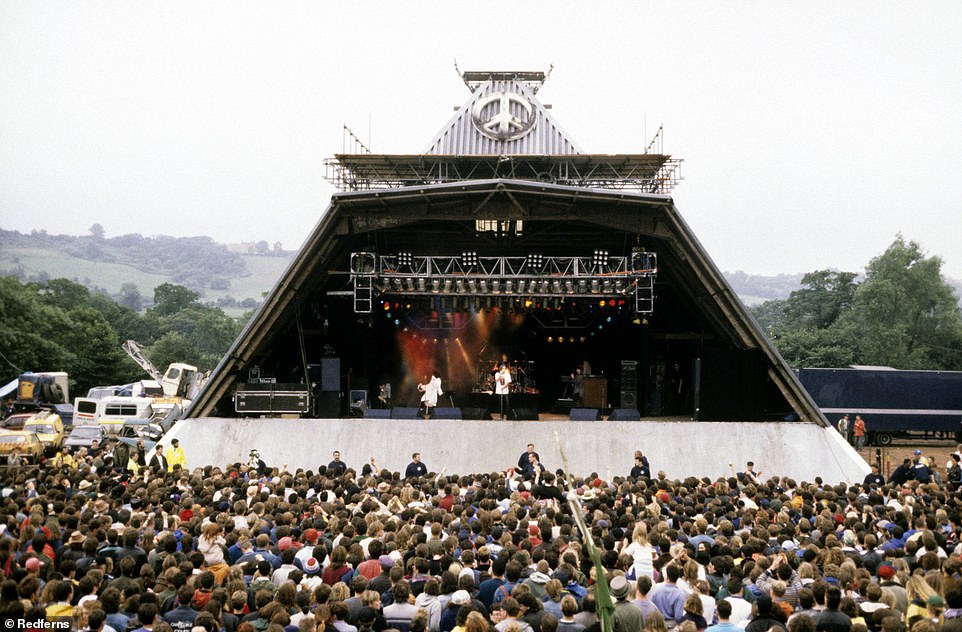 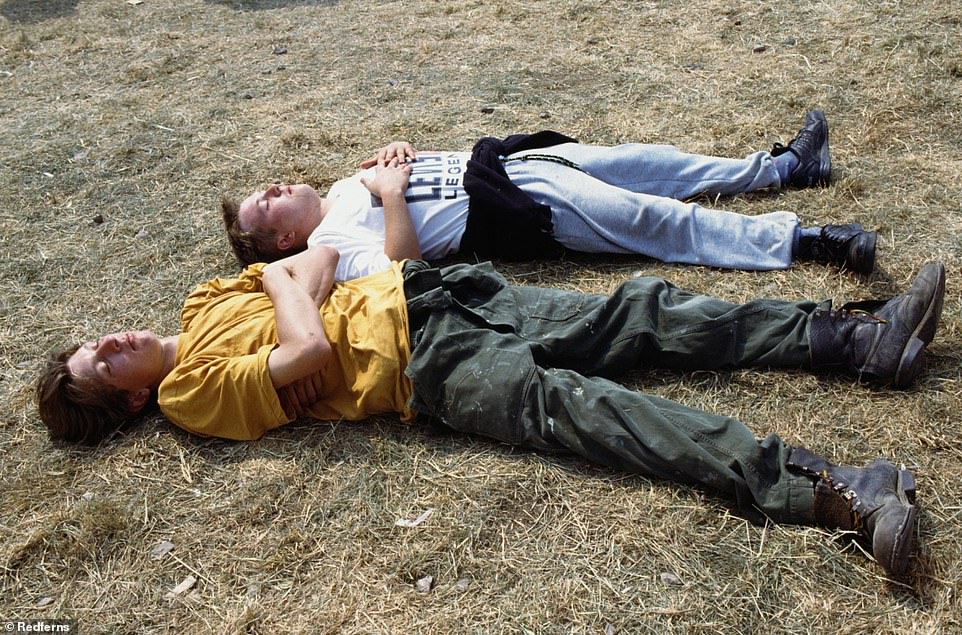 Two festival goers take a chance to relax at the Glastonbury Festival in June 1992. This was the first year that the donations from the profits of the Festival were made to Greenpeace and Oxfam. Acts included: Carter USM, Shakespeares Sister, Primal Scream, P J Harvey, Sawdoctors and The Levellers. Attendance:70,000. Tickets: £49 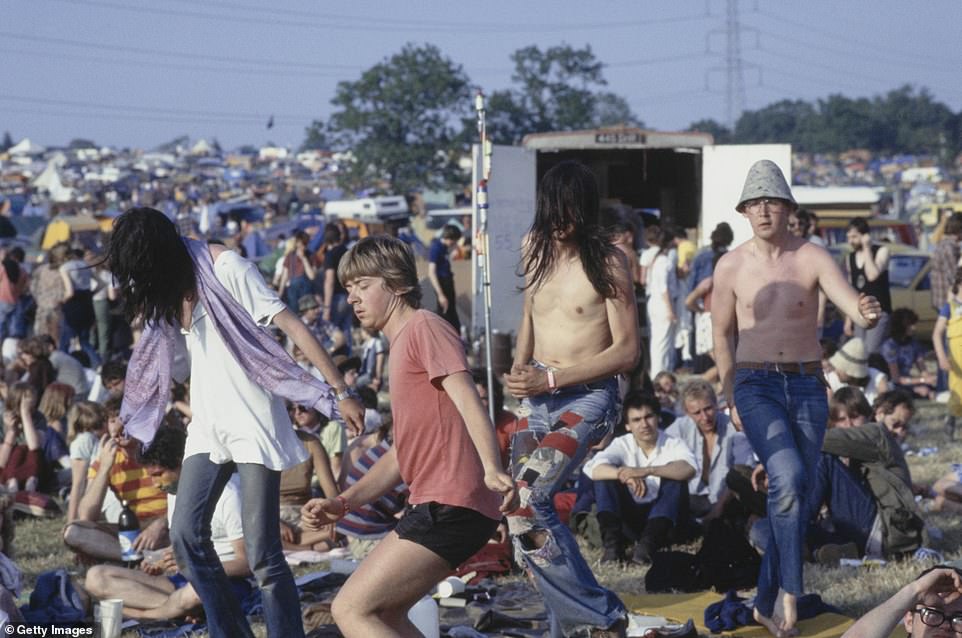