Bangkok: As a girl, Thuzar Wint Lwin would watch the Miss Universe pageant and wish that she could be the one onstage representing her country, Myanmar. She entered her first two contests last year, nervous and excited about what to expect. But she ultimately walked away crowned Miss Universe Myanmar and this week is competing at the global pageant in Florida.

But now representing her country has new meaning. With the military seizing power in a February 1 coup and killing hundreds of protesters, she hopes to use her platform to call attention to Myanmar’s pro-democracy movement and to appeal for international help in freeing elected leaders who have been detained. 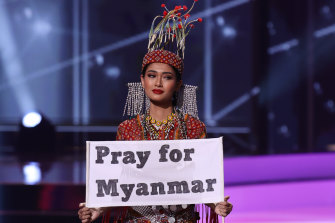 “They are killing our people like animals,” she said in an interview before leaving Myanmar for the competition. “Where is the humanity? Please help us. We are helpless here.”

In a dramatic moment on Thursday during the pageant’s national costume show, she walked to the front of the stage and held up a sign saying, “Pray for Myanmar.” The final competition will be held on Sunday.

The military takeover in Myanmar sparked widespread protests, with millions of people taking to the streets and a civil disobedience movement and general strike that have largely shut down the economy. The Tatmadaw, as the military is known, has responded with a brutal crackdown, killing more than 780 people and detaining more than 3900, according to a rights group that tracks political prisoners.

In the early weeks of the protest movement, Thuzar Wint Lwin, 22, joined the demonstrations, where she held signs with slogans such as “We do not want military government” and called for the release of the country’s civilian leader, Aung San Suu Kyi, who has been under house arrest since the coup. 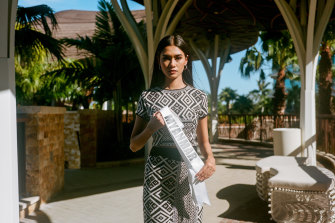 Thuzar Wint Lwin hopes to use her international platform as a pageant contestant to criticise the country’s military coup and support the pro-democracy movement.Credit:Ysa Pérez/The New York Times

She handed out water bottles to protesters in Yangon, Myanmar’s largest city, and donated her savings to families whose loved ones were killed. She also expressed her opposition to the junta on Facebook, posting black-and-white photos of herself blindfolded, with tape over her mouth and her hands bound.

The military’s onslaught has left the country living in fear, she said.

“The soldiers patrol the city every day, and sometimes they set up roadblocks to harass the people coming through,” said Thuzar Wint Lwin, who also goes by the name Candy. “In some cases, they fire without hesitation. We are scared of our own soldiers. Whenever we see one, all we feel is anger and fear.”

Every evening on television, the military announces new arrest warrants for celebrities and others who have been critical of the regime. Some of those named have been people Thuzar Wint Lwin knows. 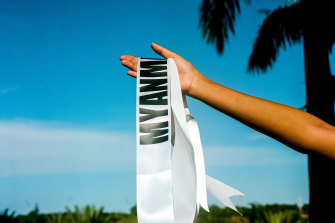 Thuzar Wint Lwin doesn’t expect to be able to return to Myanmar following her criticism of the junta.Credit:Ysa Pérez/The New York Times

Before leaving for the United States, she watched anxiously to see if her name had ended up on the military’s wanted list. She saw reports of well-known people being detained as they tried to leave the country, so she decided to wear a hoodie and glasses to keep from being recognised at the Yangon airport. “I had to pass through immigration, and I was so scared,” she said in an interview from Florida.

In criticising the junta from outside her country, Miss Universe Myanmar is not alone.

Win Htet Oo, one of the country’s best swimmers, said from Australia that he was giving up his dream of going to the Olympics and would not compete under the Myanmar flag until the regime’s leader, Senior General Min Aung Hlaing, was removed from power. And mixed martial arts fighter Aung La Nsang, an American citizen and one of Myanmar’s most famous athletes, has urged President Joe Biden to help end the suffering of Myanmar’s people.

Thuzar Wint Lwin said she believes that it will not be safe for her to return to Myanmar after speaking out against the regime; she does not know where she will go after the pageant ends.

An English major at East Yangon University, her path to the pro-democracy movement can perhaps be traced back to her childhood. She grew up in a middle-class household. Like many parents, her father, a businessman, and her mother, a housewife, dared not discuss the military government that was then in power.

One of her early memories was walking with her mother near Sule Pagoda in downtown Yangon in 2007, when monks led nationwide protests against military rule. She was 7. As they neared the pagoda, soldiers broke up the protest by shooting their guns in the air. People started running. She and her mother ran, too.

“We were very scared,” she recalled. “We went to a stranger’s house, and we were hiding.”

Soon after, the military crushed that protest movement by shooting dozens of people. But by 2011, the military began sharing power with civilian leaders and opening the country, allowing cellphones and affordable internet access to flood in.

Thuzar Wint Lwin is part of the first generation in Myanmar to grow up fully connected to the outside world and for whom a free society seemed normal. In 2015, the country seated democratically elected officials for the first time in more than a half-century. “We have been living in freedom for five years,” she said. “Do not take us back. We know all about the world. We have the internet.”

November was the first time she was old enough to vote, and she cast her ballot for the National League for Democracy, the party of Suu Kyi, which won in a landslide, only to have the military overturn the results by seizing power.

Before the coup, Thuzar Wint Lwin’s biggest ordeal came when she was 19 and had surgery to remove precancerous tumours from each breast, leaving permanent scars. She decided against having laser treatment to improve their appearance as a reminder of her success in preventing cancer.

“It’s just a scar and I’m still me,” she wrote in a recent post with photographs of the scars. “I met self-acceptance realising nothing changed who I am and the values I set for myself. Now, when I see those scars, I feel empowered.”

She began modelling when she was in high school and, after her father’s retirement, helped support the family. She is one of fewer than a dozen contestants from Myanmar ever to compete in the Miss Universe pageant, which was founded in 1952. During the period from 1962 to 2011, when the Tatmadaw first ruled, Myanmar sent no contestants.

When Thuzar Wint Lwin arrived in Florida on May 7, she was told the suitcase with her outfits for the competition had been lost by the airline. Most contestants had already arrived and were busy rehearsing, making videos and having photo shoots. As the week wore on, the bag still had not arrived, but the pageant organisers were helping her with her gown, and other contestants were lending her outfits.

Her national costume was among the missing items. People from Myanmar who live in the United States provided her with a stunning replacement of ethnic Chin origin. She wore it Thursday to the applause of many in the crowd.

Soon after landing in Florida, she posted an autobiographical video on Facebook that would be unusual for any beauty pageant contestant: It shows her wearing formal gowns mixed with scenes of people fleeing tear gas and a soldier shooting a man who rode by on a motorbike.

“Myanmar deserves democracy,” she said in the video. “We will keep fighting, and I also hope that international communities will give us help that we desperately need.”