London: A victory in Donbas – if he manages to secure it – is not the endgame for Vladimir Putin.

He means to bend the entirety of Ukraine to his will and humiliate NATO and the US.

Those, like former US diplomat Henry Kissinger and Emmanuel Macron, who think making peace is a matter of handing a slice of territory to Moscow, fail to understand a fundamental point: Putin’s strategic perspective goes much further than eastern Ukraine, and he has far more time and leverage than we assumed. 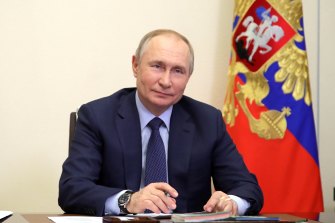 Many commentators had warned the West against complacency after Russia’s failed attempt to seize Ukraine in one blow in February. Putin’s army may have displayed tactical ineptitude and low morale, but it was always clear that a regrouped force could nevertheless achieve some of his objectives.

That is precisely what is happening now, with the tide beginning to turn against the Ukrainians in the Donbas district of Luhansk.

Moscow has been making steady territorial gains there and inflicting heavy casualties on Ukrainian forces. President Zelensky admitted last week that up to 100 of his troops are being killed every day in the eastern region. That level of attrition will be severely degrading Ukrainian military morale and fighting strength. And, given what we know about Russian war tactics, it is unlikely they will be attaining anywhere near as many casualties.

In the face of blistering artillery bombardments followed up by tank and infantry attacks, Ukrainian troops have been on the retreat. Sometimes this has involved tactical withdrawal to more sustainable defensive positions, but mostly such moves are made out of necessity.

The city of Severodonetsk is on the verge of being stormed. If it is captured alongside another key city, Lysychansk, then much of Luhansk will be under the Kremlin’s auspices. That marks a significant defeat for Ukraine – and the West.

President Zelensky says Russian weaponry outnumbers his own by 20 to one in the region. Little of the promised NATO artillery and ammunition has arrived to redress the balance and most of what they have is out-ranged. The Russian army has reportedly improved its tactics for countering hand-held anti-armour weapons that accounted for so many tank losses earlier in the conflict, and the particularly effective UK-supplied NLAW missiles are now unfortunately in very short supply.

Even “incremental” and “slow” progress by the Russians, as a Pentagon spokesman recently described it, translates over time into significant gains. This reality is made more ominous by the fact that Ukrainian forces have generally struggled to mount large scale counter-offensives despite their NATO weaponry and intelligence. Their strength has been defending ground, while major advances have usually only been made in the face of Russian withdrawal.

Earlier hopes of the Ukrainian army driving the Russians back to their borders represented optimism over hard reality.

These truths have been heeded by ministers in Kyiv, from whom we hear increasingly desperate warnings about Russian control.

For, while the territory of Luhansk is relatively small, capturing it would only be the start of Putin’s fight-back.

In the south, Moscow made major gains early on and, with the fall of Mariupol, secured its land bridge from Crimea to Russian territory. The next stage may be a renewed offensive towards Odesa with the objective of taking the whole of Ukraine’s coastline, linking up with Transnistria and threatening Moldova, an EU membership candidate. 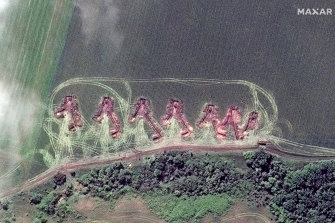 This satellite image provided by Maxar Technologies shows towed artillery in firing position deployed in the north of Lyman, Ukraine.Credit:AP

The timing of such a move depends on the state of Russia’s forces at the conclusion of the campaign in Donbas. Some advisers in the Kremlin might encourage Putin to declare victory and negotiate a ceasefire – which, as we have learnt from 2014, would only be a holding position – but the far greater temptation will be to push westwards with renewed vigour.

After all, the Russian president can see that his opponents on the battlefield are tired, and that the West is facing a reckoning with inflation, an energy shock and food shortages. He will no doubt want to press that advantage to the detriment of the Ukrainian people.