The custom-designed Blue Train, also known as the ‘Plavi Vox’, was built for Tito in 1959 and was used exclusively for his diplomatic travels with political figures and foreign statesmen across the country.

The locomotive played host to more than 60 statesmen and travelled more than 300,000 miles across the country during Tito’s rule from 1945 to 1980.

It was also used to transport Tito’s coffin across Yugoslavia to his final resting place in Belgrade, Serbia, during his state funeral in May 1980.

Now, a series of photographs have revealed the well-preserved carriages and the luxurious coaches that once played host to leaders and prominent figures from across the world. 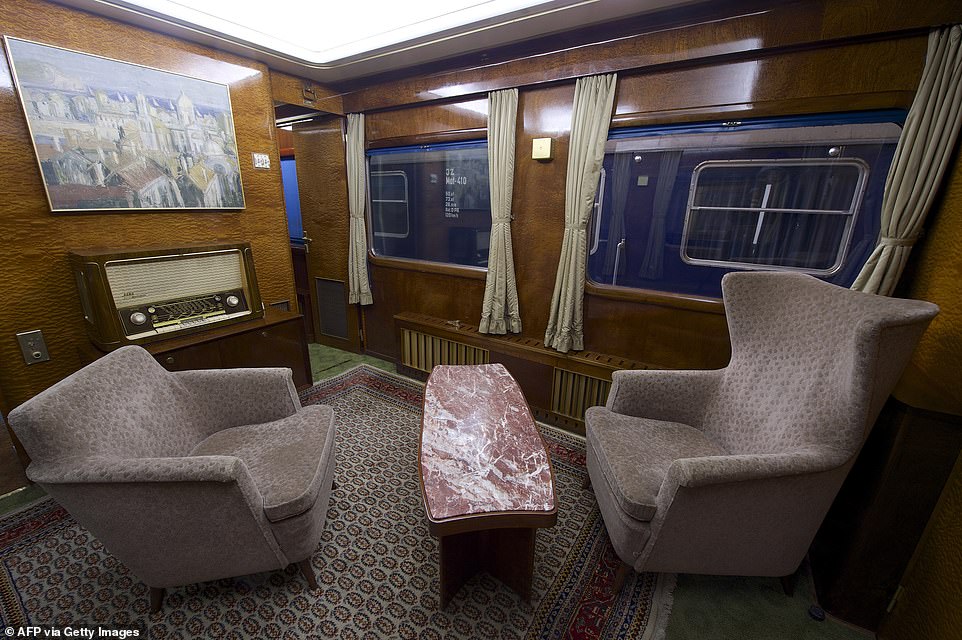 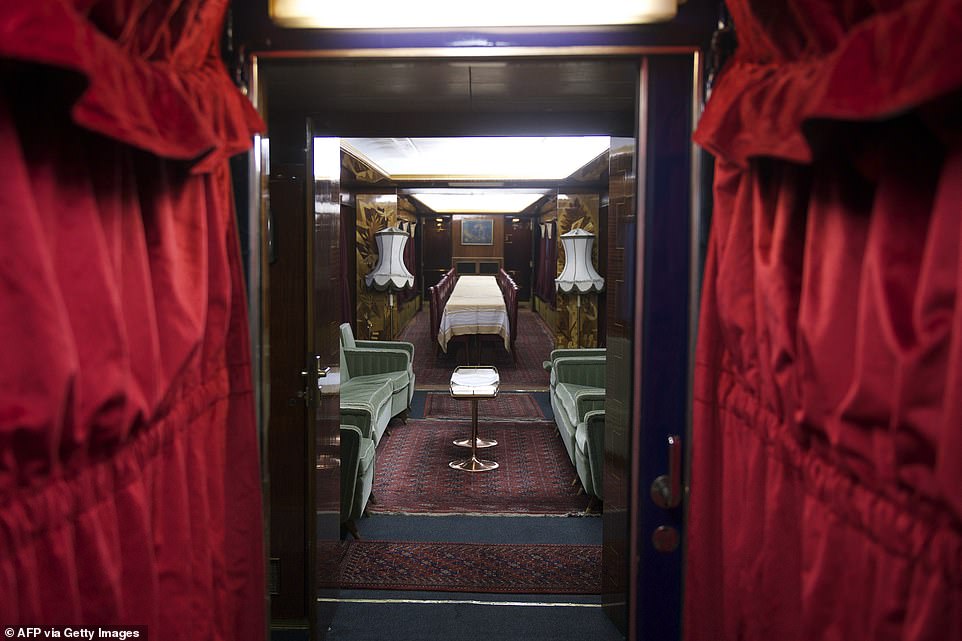 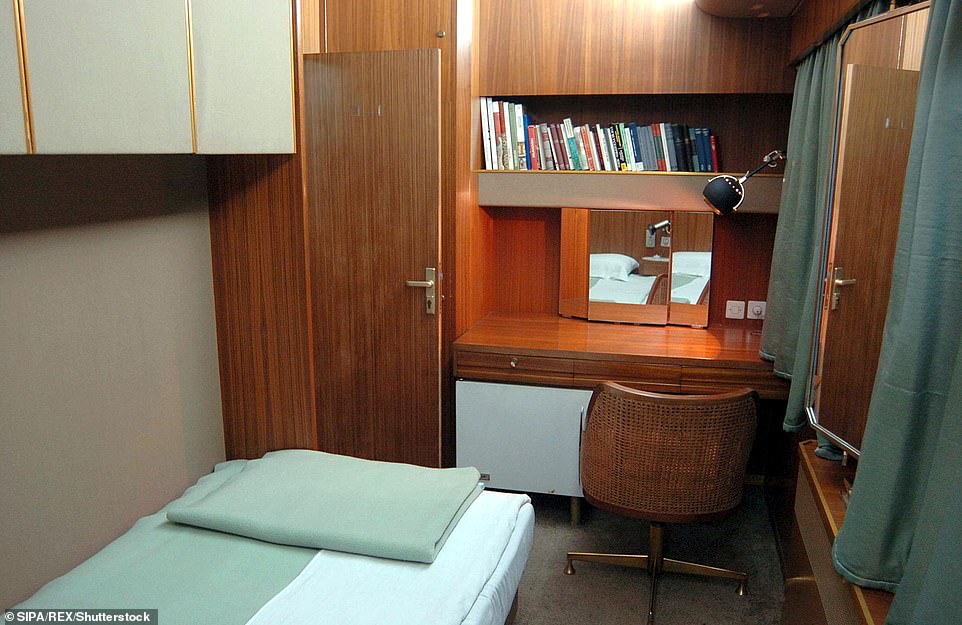 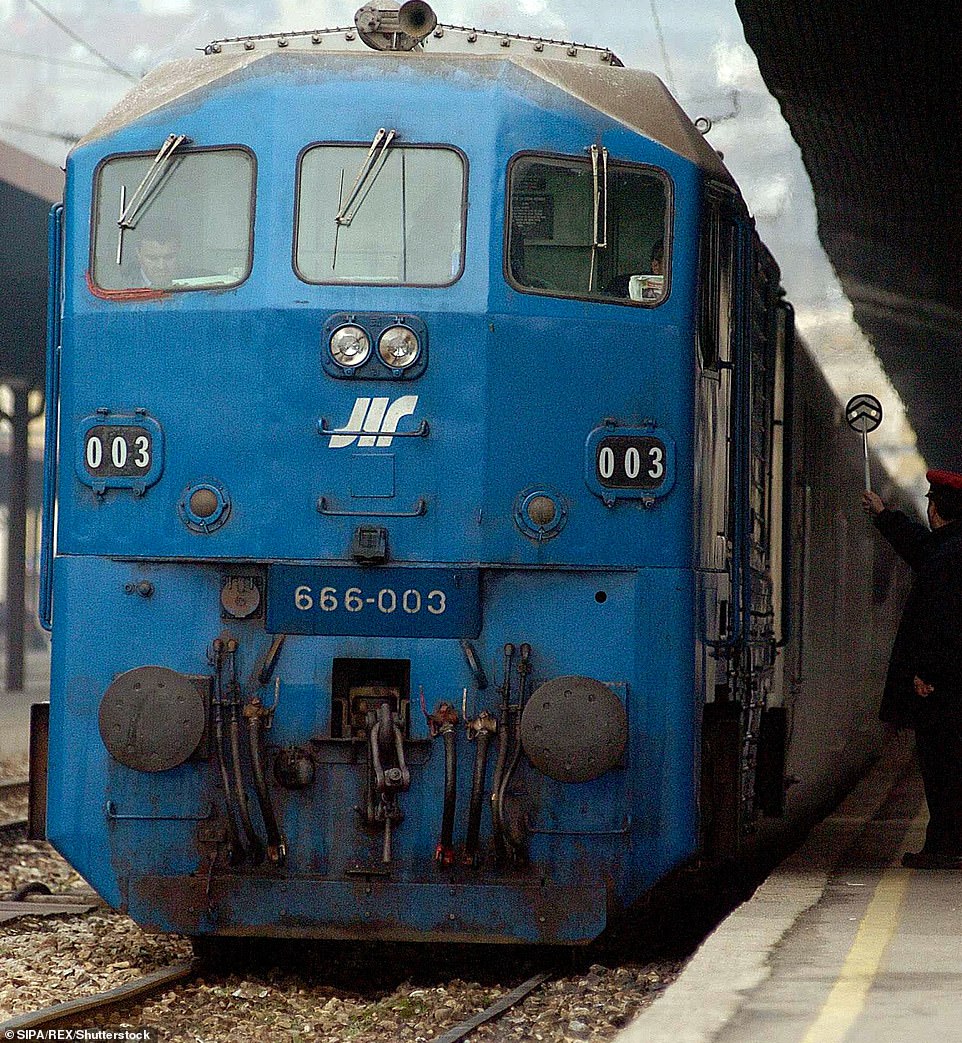 A step inside the luxury train, which consists of ten coaches in the so-called ‘Main train’ and eight coaches in  the so-called ‘First train’, reveals an art deco interior that consists of mahogany, pear and walnut wood, according to Serbian Railways, the country’s national railway company.

Meanwhile the saloons and hallways are decked out with intricate marquetry, wool carpets, velvet and silk.

A Zodiac-themed bar, apartment salon for guests, and a number of bathrooms are also available inside the time capsule train.

The locomotive, which is now open to the public, was given its name after factory workers decided that painting it blue would allow it to be set apart from other trains in Yugoslavia – which were generally painted green.

Actresses Elizabeth Taylor and Sophia Loren were also invited onboard the luxury train during a visit to the country.

According to the travel firm Explore Montenegro, the train was hailed by Yugoslavs ‘as one of the most luxurious’ in the world when it took to the rails. 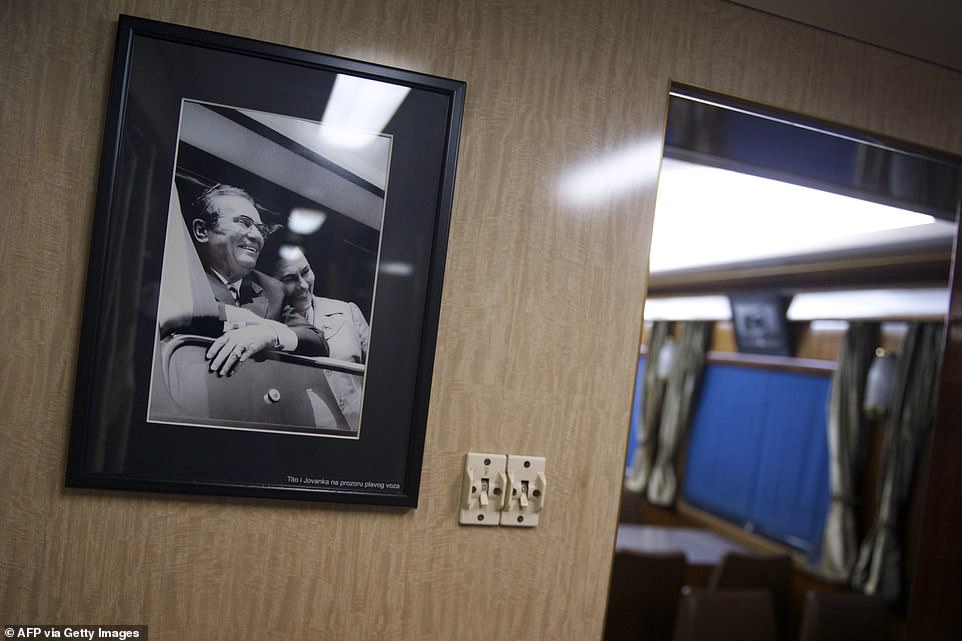 The train was also used to transport Tito’s coffin across Yugoslavia to his final resting place in Belgrade, Serbia, after his death in May 1980. Pictured: A portrait of Josip Broz Tito and his wife Jovanka in the Blue Train 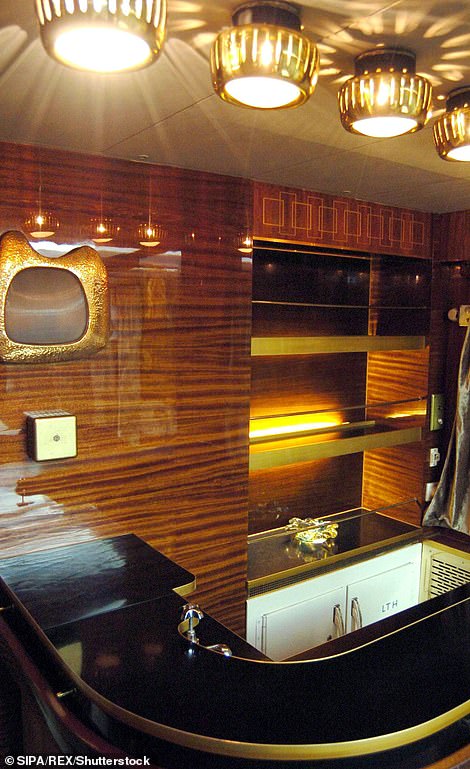 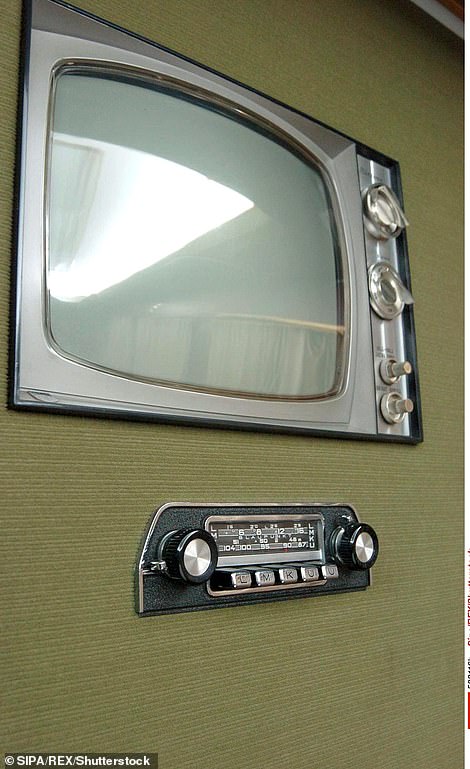 The coaches inside the Blue Train feature a bar (left), a TV set (right) an apartment salon for guests, and a sleeping coach 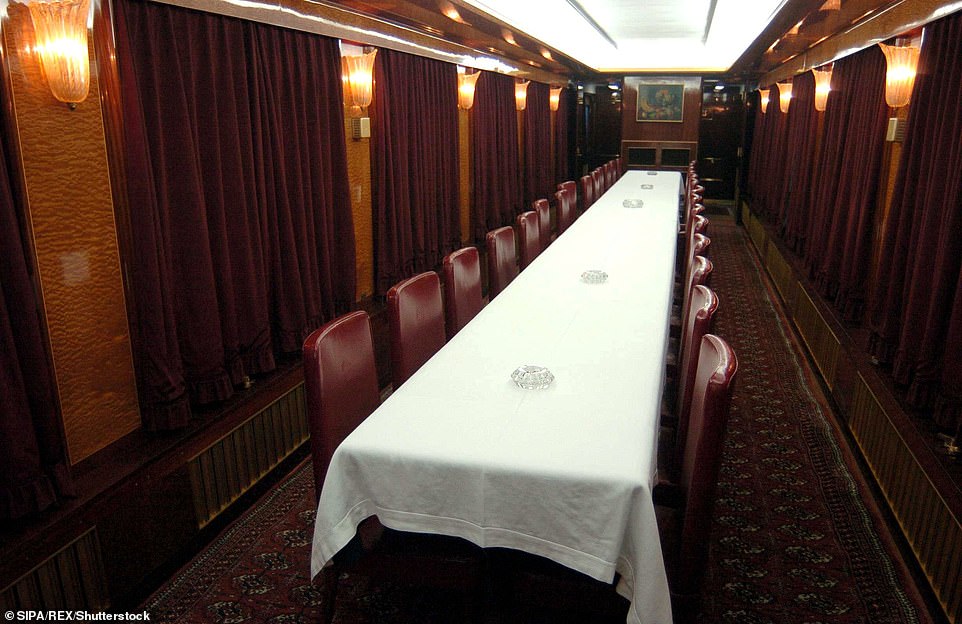 The train also features a spacious dining room (pictured), a lounge for guests, a dining-car, a main kitchen for staff and guests 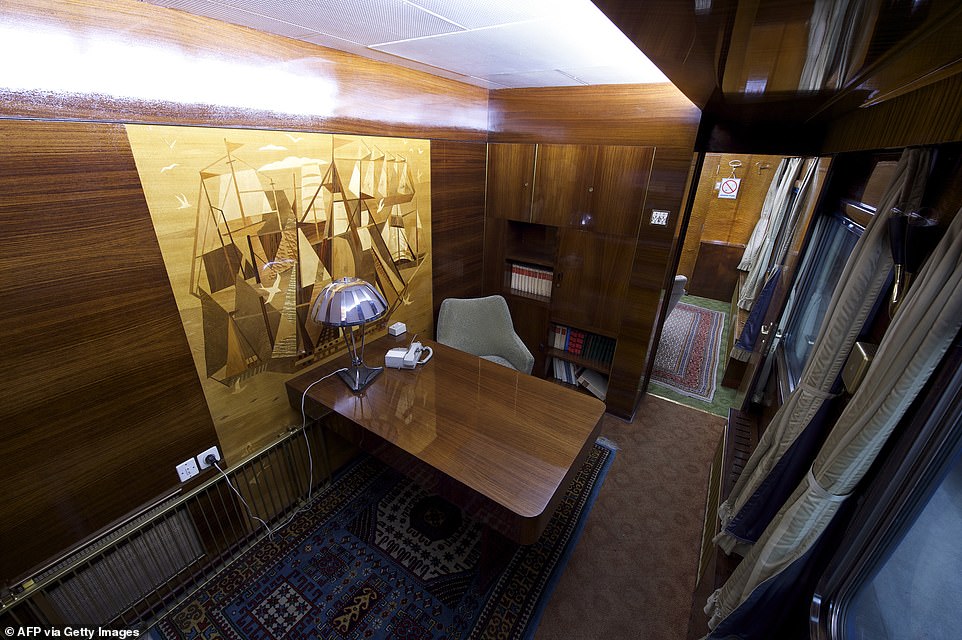 Photographs from inside the luxury train, which was used to transport Tito on his journeys through the country, reveal an art deco interior that consists of mahogany, pear and walnut wood 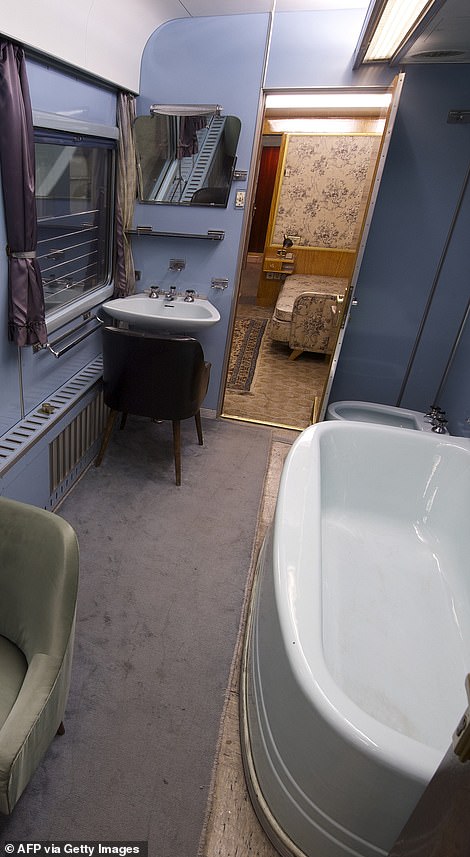 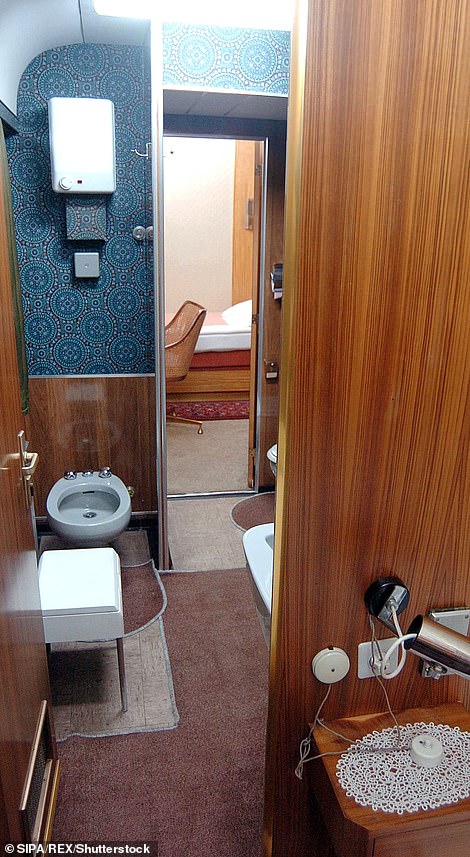 Josip Broz Tito, who was commonly known as Tito, was born in the village of Kumrovec, which now lies in Croatia, in 1892.

After leaving school, Tito worked on his parents’ family farm before leaving the village to travel south to Sisak where his cousin Jurica Broz was serving in the army.

Tito’s cousin helped him acquire a job in a restaurant, but Tito soon grew tired of this and decided to enrol in a three-year apprenticeship with a Czech locksmith, Nikola Karas.

At the age of 18, Tito participated in his first labour protest and also joined the Social Democratic Party of Croatia and Slavonia – which was founded in Budapest in 1890.

In May 1913, Tito, was conscripted into the Austro-Hungarian Army and served with the 25th Croatian Home Guard.

However in 1915, following the outbreak of First World War, he was sent to the Russian front, where he was captured by the Russians and sent to a prisoner-of-war camp – where he soon converted to Bolshevism and learnt fluent Russian.

In 1917, Tito participated in some of the events of the Russian Revolution and the subsequent Civil War before returning to Croatia in 1920.

He went on to join the Communist Party of Yugoslavia (CPY) and rapidly rose in the ranks of the CPY before taking on the name of Tito, which was a pseudonym he used in underground Party work.

Following the outbreak of war in Eastern Europe, Tito organised what has was described as ‘the most effective partisan movement against Nazi occupation in Europe’ and became instrumental in helping Jewish people flee the Nazi war.

However he became increasingly disillusioned with the USSR over the years which led to a split with the ruler of the Soviet Union Joseph Stalin who continued to send assassins after Tito – with no less than 22 assassination attempts made on Tito’s life after the Second World War.

Tito eventually wrote a letter to Stalin in which he said: ‘Stop sending people to kill me. We’ve already captured five of them, one of them with a bomb and another with a rifle. If you don’t stop sending killers, I’ll send one to Moscow, and I won’t have to send a second.’ 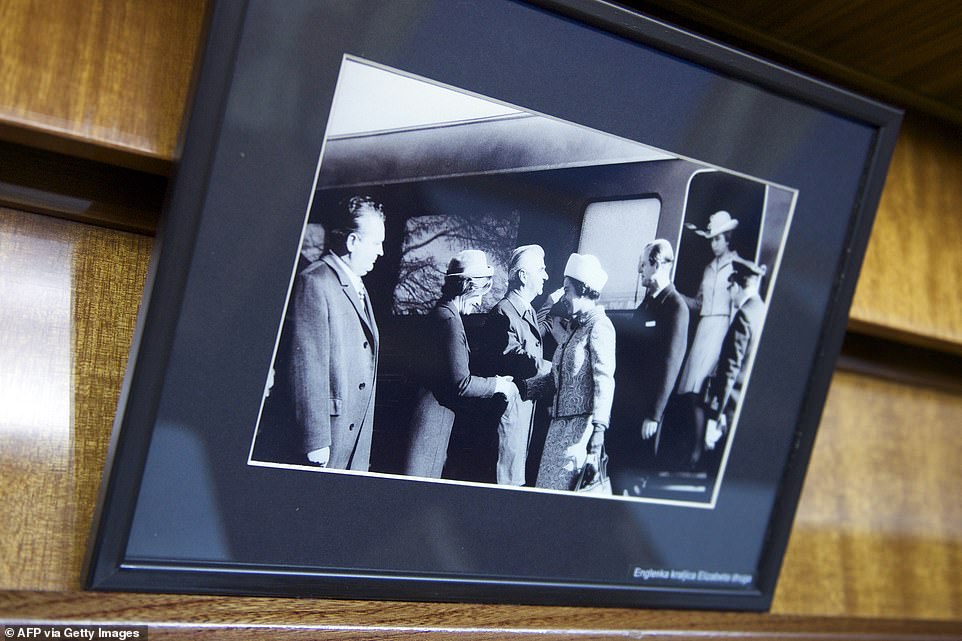 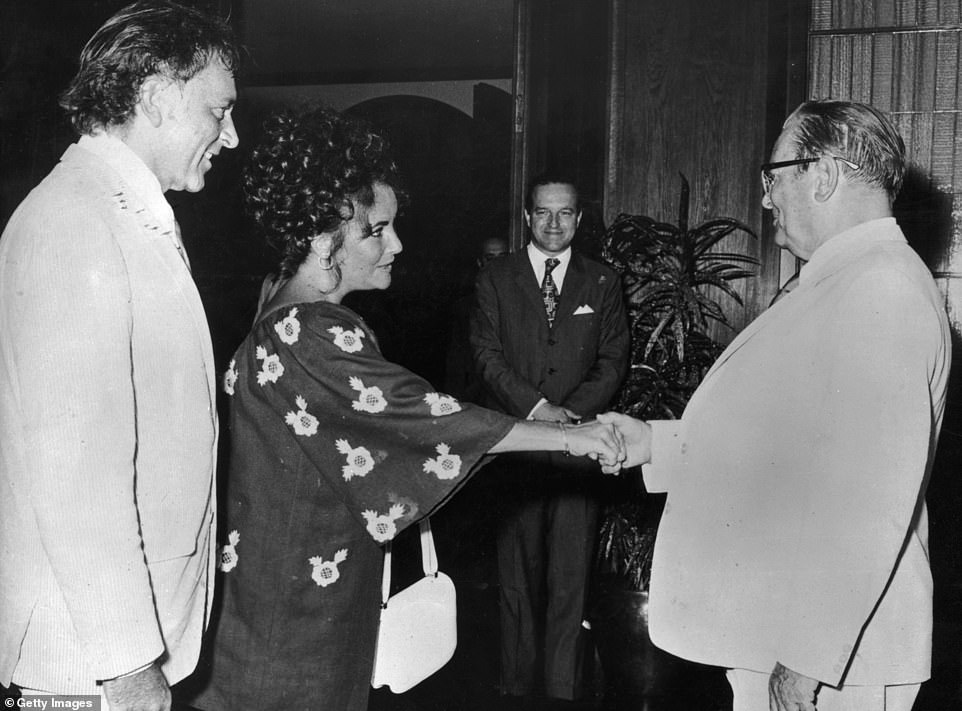 Also among his guests was the American actress Elizabeth Taylor (pictured meeting President Josip Broz Tito with her husband Richard Burton at his summer residence on Brioni island, Yugoslavia in 1971) 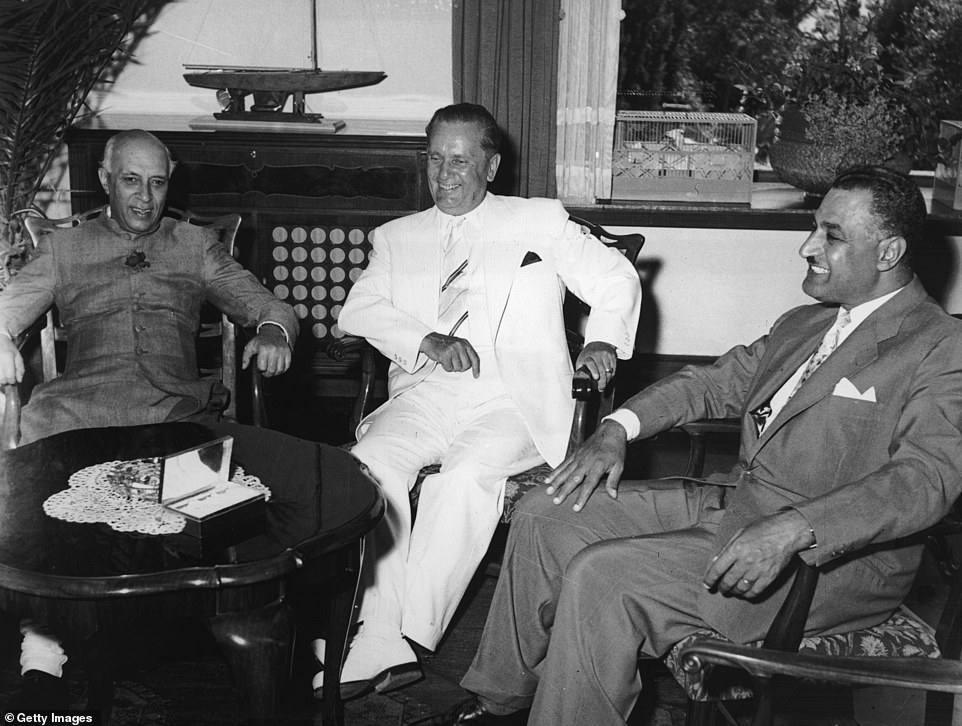 In 1953, Tito was elected Yugoslav president and was repeatedly re-elected into the role until 1963.

During his rule, Tito was viewed in some quarters as authoritarian and was widely praised for developing a unique brand of socialism in his beloved Yugoslavia.

He modelled his country on the Soviet Union, but after falling out with Stalin, chartered an independent course for the country.

Yugoslavia became far more open than its communist neighbours, such as allowing visitors free travel to the west, and was seen by many as a paradise on earth.

Following his death in 1980, the state began to fall apart as the republics began to seek greater powers for themselves and the former federation disintegrated amid bloody fighting.