Just one in 200 Covid deaths during first half of 2021 occurred among the fully vaccinated, official data reveals

Fully-vaccinated people made up just one in 200 Covid deaths in England in the first half of this year, official data shows.

The Office for National Statistics identified 256 ‘breakthrough deaths’ among the 51,281 Covid fatalities that occurred between January 2 and July 2.

More than 76 per cent of these patients were clinically extremely vulnerable to the virus, and had underlying conditions or weak immune systems.

The average age of a ‘breakthrough death’ — when a person still contracted and succumbed to Covid despite having maximum immunity from two jabs — was 84.

Today’s ONS report is the latest to highlight the immense impact the vaccines are having on reducing coronavirus deaths.

However, most of the fatalities in the six months of the research occurred at the height of the second wave, before the vaccines had become widely available.

The majority of elderly and vulnerable Britons were not fully vaccinated until spring, when the rollout began opening to younger age groups.

More recently, fully vaccinated people have started to make up a greater proportion of Covid deaths, but this is due to how successful uptake of the jabs has been.

More than 90 per cent of at-risk people are fully-jabbed and because no vaccine is perfect, a small number continue to die. 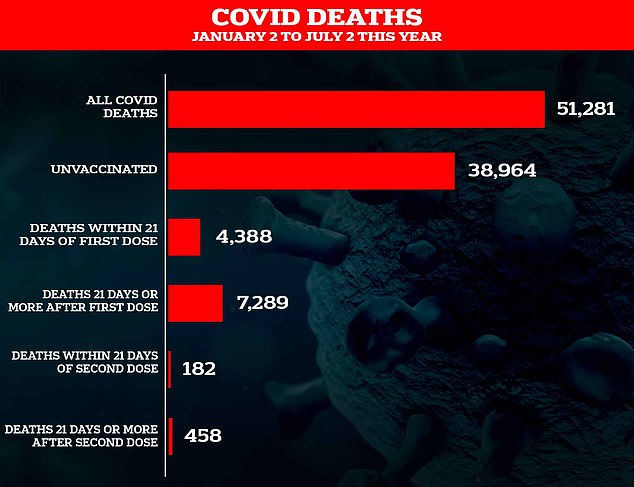 The Office for National Statistics looked at 51,281 Covid fatalities that occurred between January 2 and July 2 in England. These were broken down by vaccination status, which revealed 458  cases died 21 days after their second dose. Further analysis determined that only 256 of these had built up maximum immunity and still succumbed to the virus 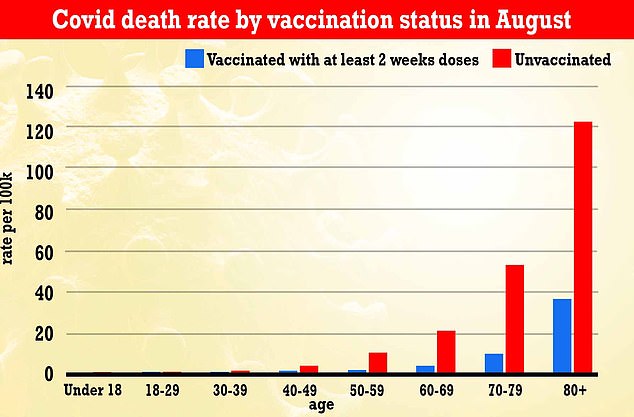 A separate report by Public Health England last week showed Britons were up to ten times more likely to die from Covid if they were unvaccinated than if they had received both jabs. The above graph shows the Covid death rate among people who had not been jabbed (red) compared to those who had received both doses (blue). The data is for August only and England. The rate for Covid deaths was worked out by dividing the total number of vaccinated and unvaccinated people who died with the virus by the total number of people in each category in the population in England 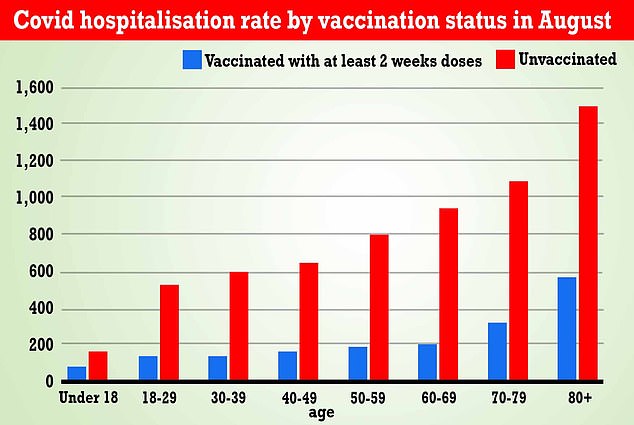 Julie Stanborough, deputy director of health and life events at the ONS said: ‘Our new analysis shows that, sadly, there have been deaths of people involving Covid-19 despite them being fully vaccinated.

‘However, we’ve also found that the risk of a death involving Covid-19 is much lower among people who are fully vaccinated than those who are unvaccinated or have only received one dose. This shows the effectiveness of the vaccines in giving a high degree of protection against severe illness and death.’

The ONS also added that 13 per cent of the ‘breakthrough deaths’ occurred in people were who were immunosuppressed.