Vancouver, British Columbia: Canadian Prime Minister Justin Trudeau says his “heart breaks” after the discovery of more unmarked graves on the grounds of an Indigenous residential school in the southern Gulf Islands off the British Columbia coast.

The Penelakut Tribe says more than 160 undocumented and unmarked graves have been found on the site of the former Kuper Island Indian Industrial School.

“I recognise these findings only deepen the pain that families, survivors and all Indigenous peoples and communities are already feeling as they reaffirm truth that they have long known,” Trudeau said during a news conference on Tuesday (Wednesday) in Ottawa. 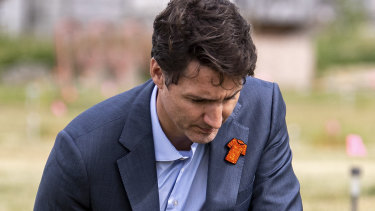 Canadian PM Justin Trudeau lays a teddy bear at a small flag at the site of a former residential school where ground-penetrating radar detected a potential 751 unmarked graves, in Cowessess First Nation, Saskatchewan.Credit:AP

“To members of the Penelakut Tribe we are here for you. We cannot bring back those who are lost but we can and will continue to tell the truth,” Trudeau said.

The Penelakut Tribe have issued a letter saying the graves were found on the grounds of the former residential school on what is now known as Penelakut Island between Vancouver Island and mainland BC, about 126 kilometres southwest of Vancouver. 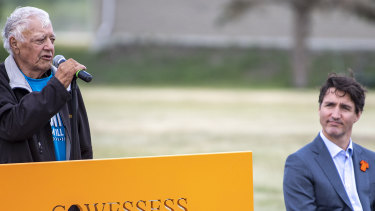 “We understand that many of our brothers and sisters from our neighbouring communities attended the Kuper Island Industrial School,” said the letter from Chief Joan Brown. “We also recognise with a tremendous amount of grief and loss, that too many did not return home.”

The Kuper Island Indian Industrial School was operated by the Roman Catholic Church from 1890 until 1969, when the federal government took it over. The school was closed in 1975 and the building was demolished in the 1980s.

Trudeau said the federal government will work with Indigenous people to fight discrimination and systemic racism.

Close to 1000 unmarked graves have been discovered at former residential school sites in British Columbia and Saskatchewan over the last several months.

In July, ground-penetrating radar found 182 human remains close to a former residential school in Cranbrook, BC, 843 kilometres east of Vancouver.

Just a week earlier, the Cowessess First Nation, located about 135 kilometres east of the Saskatchewan capital of Regina said investigators found “at least 600” unmarked graves at the site of a former Marieval Indian Residential School.

In May, the remains of 215 children, some as young as 3 years old, were found buried on the site of what was once Canada’s largest Indigenous residential school near Kamloops, BC, 354 kilometres east of Vancouver.

From the 19th century until the 1970s, more than 150,000 Indigenous children were forced to attend state-funded Christian schools, the majority of them run by Roman Catholic missionary congregations, in a campaign to assimilate them into Canadian society.

The Canadian government has admitted that physical and sexual abuse was rampant in the schools, with students beaten for speaking their native languages.