Kidnapping charges against Mick Gatto’s nephew and two other men have been withdrawn – and legal costs awarded to them – after their alleged victim refused to give evidence in court.

Daniel Gatto, a nephew of the underworld figure, and two others were accused of forcing a man into a car and holding him against his will in June last year, relating to an alleged dispute over the purchase of luxury handbags. 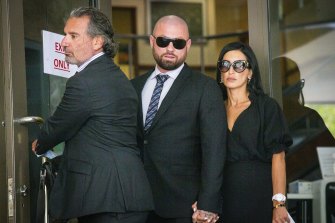 On Thursday, prosecutor Sharon Kermath told the court the kidnapping charges against the trio had been withdrawn after the alleged victim earlier refused to give evidence.

A bail hearing last year was told Daniel Gatto was accused of kneeing the alleged victim to the head, threatening him and demanding he return $2000 over the online purchase of a Louis Vuitton handbag, which was said to be fake.

Magistrate Gregory McNamara ordered Victoria Police pay legal costs for Gatto, 39, Joseph Mandaliti, 41, and George Daoud, 39, up to May this year, the date a hearing was set for the alleged victim to give evidence.

Gatto and his friends on Thursday pleaded guilty to unrelated minor charges after police found banned items, including drugs, ammunition and fireworks, at each of their homes last year. 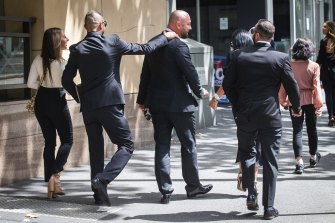 Gatto’s lawyer, Martin Amad, said his client didn’t know where the bullet came from, but admitted he’d had the fireworks for “many, many years”. Amad told the magistrate Gatto didn’t deserve further punishment on top of the time he spent in jail before he was granted bail.

“My submission is I’m only going to say four words: two days in custody,” Amad told the magistrate.

McNamara agreed not to impose further penalty on the father of three, and found the charges proven but struck them out.

The Age does not suggest Mick Gatto was involved in his nephew’s offending.

Mandaliti was also spared further punishment after he pleaded guilty to possessing a drug of dependence, when police found five vials of testosterone and five ecstasy tablets at his Eden Park home. He also spent two days in custody last year before he was bailed.

His lawyer, Rob Melasecca, said the drugs were for Mandaliti’s own use.

The magistrate found Mandaliti’s charges proven, then struck them out. He said the offending of both Gatto and Mandaliti was on the lowest end of the scale.

Daoud’s lawyer, Theo Alexander, said his client grew the drug for personal use to relieve muscle pain caused by a lifelong health condition. The ammunition belonged to a friend, Alexander said, and the imitation handgun comprised items that could be assembled to form a “Frankenstein’s firearm” that couldn’t be fired.

Daoud pleaded guilty to possessing and cultivating cannabis and possessing cartridge ammunition and an imitation firearm.

McNamara said he was concerned by the quantity of cannabis found, as it appeared more than Daoud needed for personal use. But there was no evidence he sold the drug to others.

The magistrate convicted and fined Daoud $6000.