Gyms will be re-opening across England from Monday and some of the country’s biggest fitness studios have revealed their preparations including one hour time limits, social distance zones and thousands of litres of fresh air pumped in every second.

From April 12, all non-essential shops will be allowed to reopen, as well as hairdressers, beauty salons and, most importantly for some, gyms.

The easing of restrictions will give people in England the opportunity to shed unwanted pounds after three months trapped inside.

And some of the country’s biggest gym brands have now revealed the measures they will be taking on April 12.

The measures include fresh air being pumped into the gym, special zones marked for social distancing, a booking system to manage capacity and regular deep cleaning. 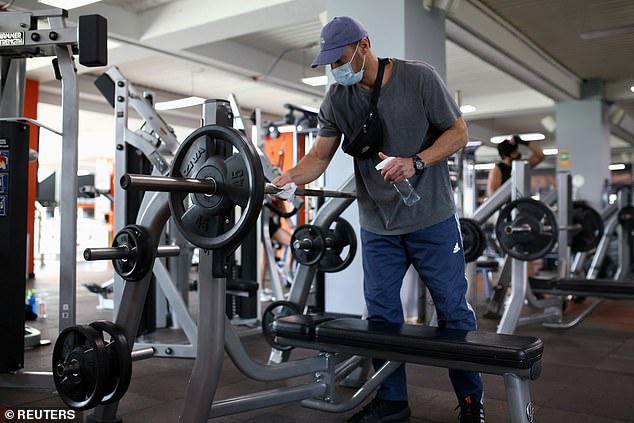 From April 12, all non-essential shops will be allowed to reopen, as well as hairdressers, beauty salons and, most importantly for some, gyms

PureGym, a 24-hour studio with more than a million members and Britain’s largest operator, will reopen Monday but will ask members to workout for just an hour

PureGym, a 24-hour studio with more than a million members and Britain’s largest operator, has revealed a series of safety measures for April 12.

Contactless entry with the gym’s personal app will be in place, as will hand sanitiser, dedicated workout areas and extensive staff cleaning.

Around 2,000L of fresh air will also be pumped into gyms every second – though the gym indicated sessions will be limited for an hour.

Face coverings will also be required throughout the gym, unless you are using equipment.

The Gym group, which has around 160 gyms with 668,000 members, has emailed users, confirming it will be open from 6am on Monday.

The 24-hour gym has also unveiled a raft of safety measures users will be expected to follow.

After using a machine, users should wipe it down with paper towels provided.

Equipment will be spaced apart, hand sanitiser will be provided and users will be encouraged to use a live app that tracks how busy individual gyms are.

The gym added on its website: ‘We do not currently allow for members to train with each other, even if you are from the same household or bubble.

‘This is to ensure that there is still plenty of access around the gym, and avoids members from getting too close to one another.

‘For health and safety while using equipment, spotting is permitted, however the spotter must be wearing a face mask. If you do not have a face mask, you should not be spotting.’

Virgin Active will also be reopening on April 12, though it has yet to confirm its opening hours.

The Gym group, which has around 160 gyms with 668,000 members, has emailed users, confirming it will be open from 6am on Monday

Virgin gyms have installed safety markers at reception, on the gym floor and in the studios to help maintain distance.

Hand sanitiser stations have been set-up throughout gyms with Virgin confirming changing areas are to be cleaned regularly as well as an overnight deep clean.

Gym capacity will be monitored and fresh air will be pumped through the gym at its maximum setting.

Measures introduced at studios include reduced capacity and increased space between equipment to two metres, as well as adding a one-way system.

Additional gym space, with individual workout areas of 3m x 3m have been introduced as well as sanitiser stations.

The group added: ‘We have increased the number of cleaning staff we employ, allowing us to increase the volume of cleaning across the Club, with particular attention being paid to areas of high traffic.’

The Prime Minister last night confirmed his four tests had been met for moving to the next stage of his lockdown easing roadmap – the continued success of the vaccine rollout, the impact it is having on hospitalisations and deaths, the NHS not being overwhelmed, and no new variants of concern.

He told the press conference: ‘On Monday I will be going to the pub myself – and cautiously but irreversibly raising a pint of beer to my lips.’ But Mr Johnson added: ‘We can’t be complacent. We can see the waves of sickness affecting other countries and we have seen how this story goes.

‘We still don’t know how strong the vaccine shield will be when cases begin to rise, as I’m afraid that they will, and that’s why we are saying please get your vaccine, or your second dose, when your turn comes.’

What will change on April 12?