A man who was trapped 15 feet underground for two days in a storm pipe the width of a large pizza has finally been rescued after passersby heard his screams for help and raised the alarm.

The unnamed man, in his mid-30s, was the subject of a dramatic hours-long rescue  involving at least 50 firefighters, police officers and rescue personnel in Antioch, north-east of San Francisco.

Officials freed the man from the 16-inch (41cm) diameter pipe at about 9.30pm on Sunday, according to the Contra Costa County Fire Protection District.

‘When we finally got him out of the ground, he was beyond exuberant. He was beyond happy to be above ground,’ spokesman Steve Hill said.

The man was not injured but showed signs of dehydration and was taken to a hospital to be evaluated.

Pictures from the scene show him being wheeled away on a stretcher.

Hill said the man entered the extensive storm water system intentionally and at one point reached the area of the narrow pipe and became stuck. 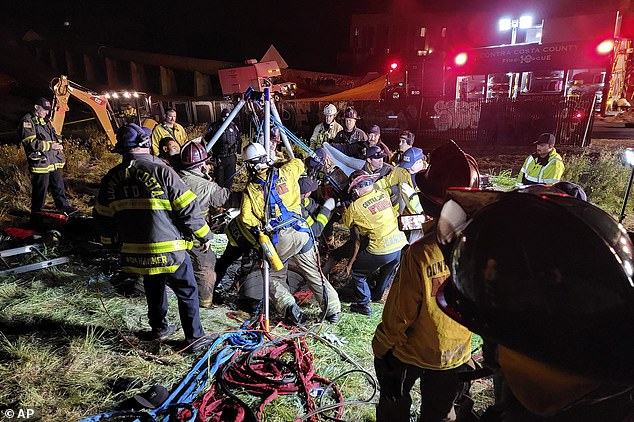 The unnamed man, in his mid-30s, was the subject of a dramatic hours-long rescue involving at least 50 firefighters, police officers and rescue personnel in Antioch, north-east of San Francisco. 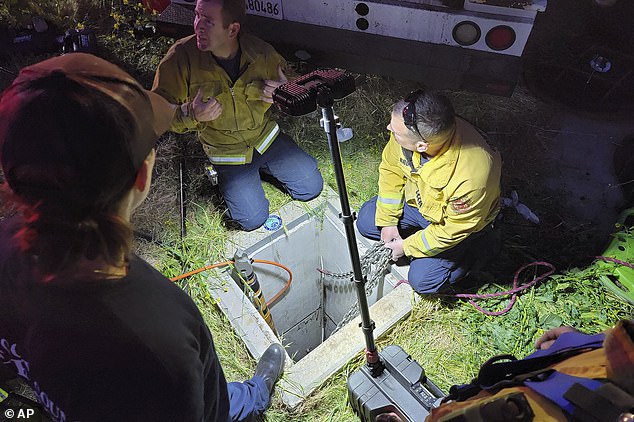 The man told officials he had been trapped for about two days before passers-by heard his screams and called 911.

‘Somehow, people passing by on a walking path some distance away from the stormwater system managed to hear his cries for help, ‘ Hill said.

‘That’s fairly miraculous because it was pretty windy out there.’

Hill said the high-risk rescue operation involved four firefighters with their own air supply entering the underground space from one direction while other rescuers dug a second access from the opposite side.

They had to clear tree branches, garbage and other debris to reach the man, who was able to communicate with authorities the entire time.

‘There were a lot of pipes down there, a lot of places he could have been,’ Hill added.

‘The incident commander hedged his bets with a Plan A and B.

‘Plan A succeeded when firefighters were able to reach the vault and clear the debris.

‘At the same time, public works folks had a backhoe to dig down to the concrete pipe on the opposite side of the man’s location.’

‘As an all-risk fire agency, we train for rare rescues such as this,’ Contra Costa County Fire Protection District Fire Chief Lewis Broschard said in a statement Monday afternoon.

‘Still, this was a complex and high risk rescue effort that required extensive specialized resources and the skill and experience of many professionals from across the District to successfully complete.’