Russian police have shown for the first time how they lured notorious Chessboard Killer mass murderer into publicly confessing to 61 murders.

They had lacked clinching evidence – but after evil Alexander Pichushkin’s arrest, he signalled that if allowed to speak live on TV, he would fully admit his bloody reign of terror to the world.

Footage never seen before shows how a press conference was staged specially for the mass murderer, also known as the Bitsa Maniac, named after a large park in Moscow.

But monster Pichushkin, now 47, did not realise that it was a complete set-up. 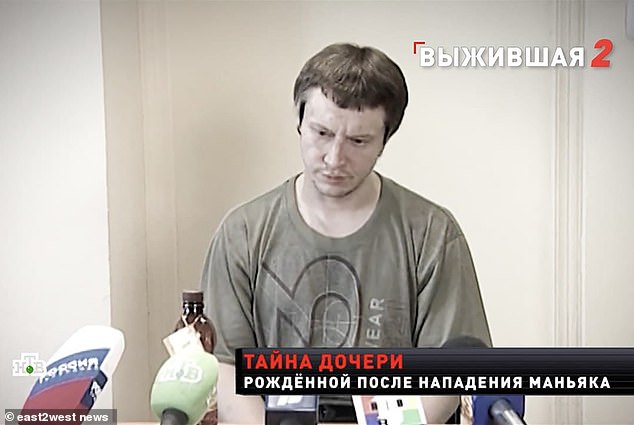 He saw the cameras and microphones from Russia’s leading channels, and believed he was live on nationwide TV.

In fact, the only people watching in 2006 were detectives who eagerly accepted his filmed confession.

It was considered too hurtful to victims’ relatives to permit him to actually speak live on TV.

The shocking footage from the fake session has been released from police archives and was screened by NTV channel.

Handcuffed and wearing a T-shirt, he said: ‘The Bitsa Maniac, as they call me, it is me.

‘In fact I committed 61 murders. Sixty of them in Bitsa Park and one in the city (Moscow). 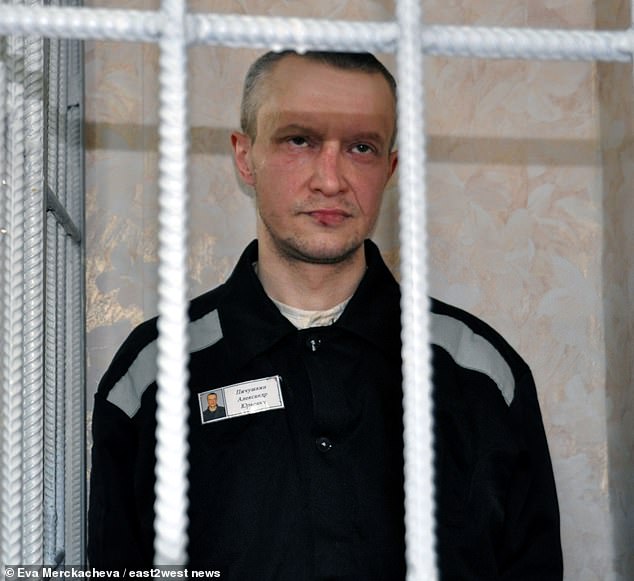 They had lacked clinching evidence – but after evil Alexander Pichushkin’s arrest, he signalled that if allowed to speak live on TV, he would fully admit his bloody reign of terror to the world. Pictured: Pichushkin in Polar Owl jail in 2016

‘Most of the bodies I drowned in sewage wells.

‘Why did I kill? I don’t know. There was no sense in life for me without this.’

Police used the confession in a trial which eventually saw him convicted of killing 49 victims – many homeless – but he has always claimed another 11, a figure accepted by most experts.

His gruesome target had been 64: the number of squares on a chess board.

Later he admitted in an interview from a top-security jail – from which he will never be freed – that each killing ‘brought me colossal pleasure. It is comparable to an orgasm.’

But NTV also highlighted appalling evidence that a victim attacked and left for dead in a sewer by Pichushkin had given police his name and address after he had killed 24 people. 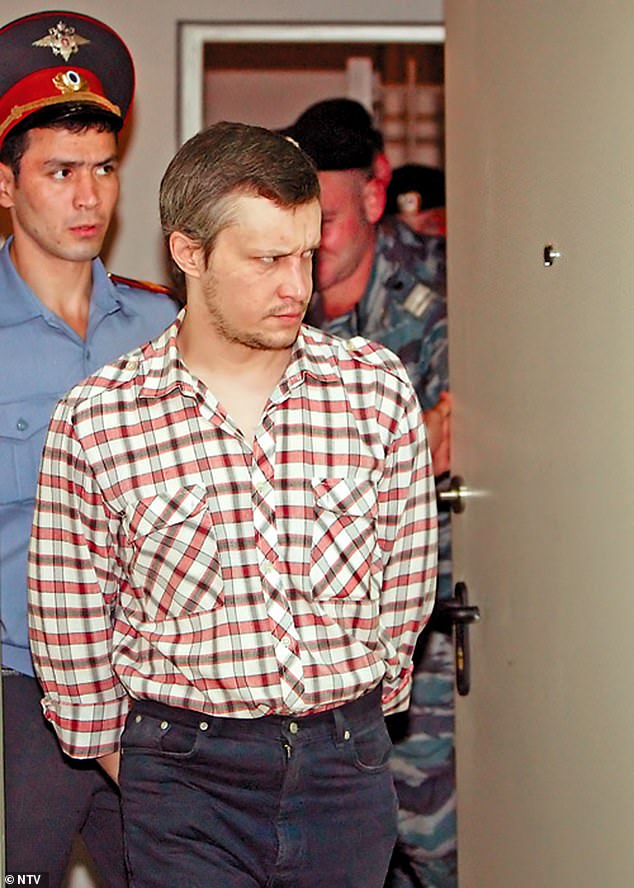 Footage never seen before shows how a press conference was staged specially for the mass murderer, also known as the Bitsa Maniac, named after a large park in Moscow. Pictured: Pichushkin arriving at court

Had he been caught then, dozens of women would have survived.

Maria Viricheva was 18 in February 2002 when Pichushkin saw her in tears after a row with her boyfriend and pretended to comfort her.

Her persuaded her to go with him into the park.

As they walked, he told her his name and address, and she realised she lived close to him.

She said: ‘I saw an open sewage well.

‘(Pichushkin) grabbed my hair and started banging my head against the iron well cover.

‘When I realised blood covered my face, and I felt terrible pain… I knew… he would kill me.’

So she let her body fall and crashed 25ft into the sewage well. 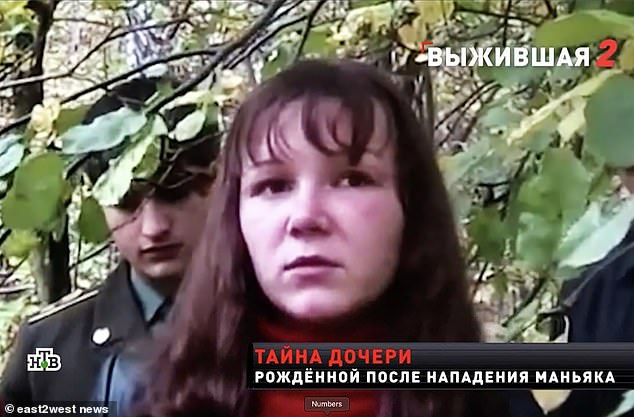 She was carried away and choking but somehow managed to sit up.

By a miracle, many hours later she managed to lift a manhole cover and scream for help.

She was taken to hospital where she gave a policeman her attacker’s name and address.

But the cop – named Kalashnikov – was not interested in probing the attack on her.

He promised to tell her boyfriend she was safe, and get him to bring some clothes for her, but only if she pretended she had fallen into the well.

The policeman was later jailed for incompetence.

Senior investigator Andrey Suprunenko said: ‘His only motive was: ‘I do not want to work’, that’s all. 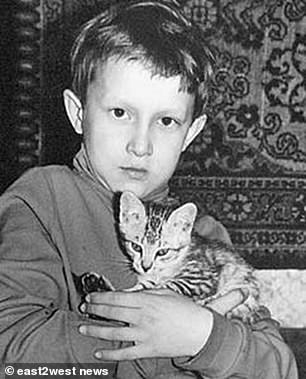 The hate-filled killer (pictured as a child) is serving his sentence in Arctic penal colony Polar Owl, which he has branded a ‘concentration camp’

‘He did not need to search for anyone or prove anything.

‘We would then not have seen more than half the corpses.’

Maria – who had been living without proper residential papers in Moscow – suffered from her ordeal.

Her boyfriend dumped her, even though she was carrying his baby and she also saw Pichushkin by chance in a shop.

‘I realised that I must run,’ she said. ‘Because he saw me too.

‘I wanted to sink into the ground, so he would not see me.

‘But he saw me. I met his gaze. I rushed from the shop, went to my flat, and in two days I fled that flat….

‘I panicked, I was running away in panic… so he would not kill me.’

She feared going to the police who had let her down once, knowing she did not have the correct documents to live in Moscow.

She gave birth to a healthy baby but was forced to give up the child for adoption.

Later she gave evidence against Pichushkin in 2006, and endured a terrifying face to face confrontation with the killer as part of the police investigation.

The hate-filled killer – known to receive love letters from Russian women – is serving his sentence in Arctic penal colony Polar Owl, which he has branded a ‘concentration camp’.