Monkey throws four-month-old baby boy to his death from the roof of a three-storey building in India: Animals snatched child from parents and killed him before their eyes

A four-month-old baby was allegedly wrenched from the arms of his parents and tossed to his death by a raging troop of monkeys in India last week.

The horrifying incident took place in the rural village of Dunka, close to Bareilly in the northern Indian state of Uttar Pradesh, where Nirdesh Upadhyay was standing on the terrace of his three-story house with his wife and their baby son.

The trio were enjoying a lazy Friday evening up on the terrace when a troop of the primates clambered onto the roof and surrounded them.

After futile efforts to bat the monkeys away, the new parents ran towards the stairs in an attempt to escape but Nirdesh, who was carrying his son, stumbled and dropped the child.

In a split second before either parent could react, one of the monkeys grabbed the baby boy by the hand and hurled him off the roof.

Distraught, the parents managed to get back inside the house and tore downstairs to their son’s aid, but the infant reportedly died at the scene.

The incident is now under investigation with authorities at the Shahi police station, and Bareilly city’s conservation chief, Lalit Verma, told PTI News his team were dispatched to investigate the involvement of monkeys in the child’s death. 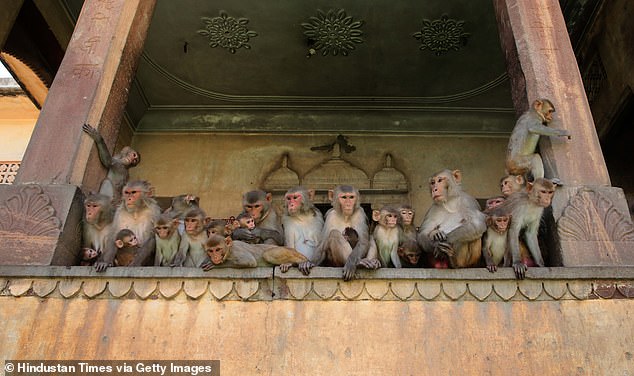 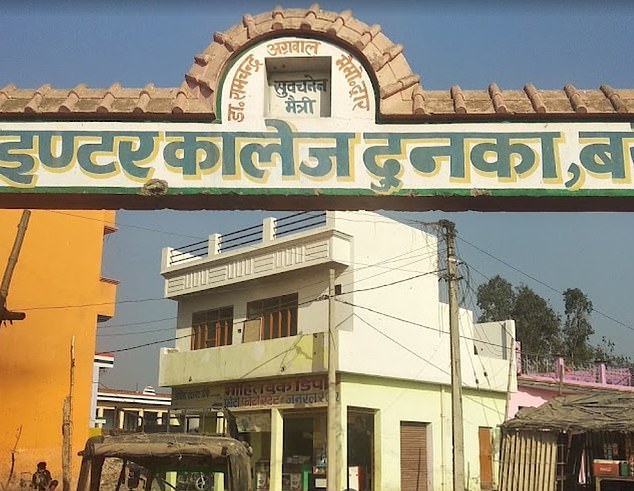 The horrifying incident took place in the rural village of Dunka, close to Bareilly in the northern Indian state of Uttar Pradesh (building in Dunka pictured)

Uttar Pradesh is home to a huge population of rhesus monkeys, which roam free throughout many of the state’s towns and cities.

Although the primates are generally able to live in relative harmony alongside the humans who reside in these settlements, there are a number of documented cases of the monkeys attacking people, in particular children.

A five-year-old girl was killed by a troop of monkeys in the village of Bichpuri, in the Bareilly district of Uttar Pardesh, in February.

The girl, whose name was Narmada Kishore, was playing with her friends near Nakatiya river when the monkeys set upon her and began biting her all over her body, according to Times of India.

Narmanda’s father, Nand, told the newspaper: ‘The monkeys were quite aggressive and had bitten my daughter almost everywhere. When I reached the spot she was crying for help.’

The girl was rushed to the community health centre but died from major blood loss. 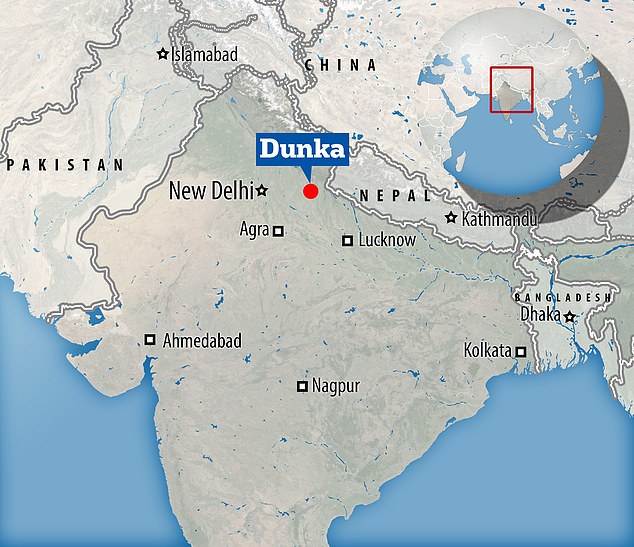 Nirdesh Upadhyay’s son was thrown off a three-storey building by monkeys in Dunka, close to Bareilly in the northern Indian state of Uttar Pradesh 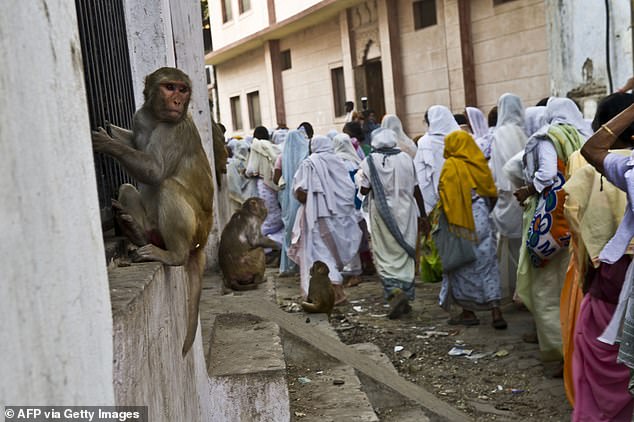 Uttar Pradesh is home to a huge population of rhesus monkeys, which roam free throughout many of the state’s towns and cities. They generally live in harmony with their human neighbours but there have been multiple reports of violence committed by monkeys, particularly towards children

There are even incidents of the primates hijacking vehicles from unsuspecting motorists in Bareilly, including one report of a monkey stealing and crashing a bus.

In 2015, one primate managed to start the engine of the bus as it sat in a garage in the city while the driver was taking a nap.

The monkey turned the ignition key and reportedly smashed the bus into two other vehicles parked in the garage before the driver was able to regain control.

‘The driver managed to regain control of the bus but not before it hit two other parked buses,’ local public transport manager SK Sharma told Times of India at the time.

‘Monkeys have become a regular menace at bus stations and workshops, where they often fiddle with vehicles undergoing repair. They have also damaged CCTV cameras at stations.