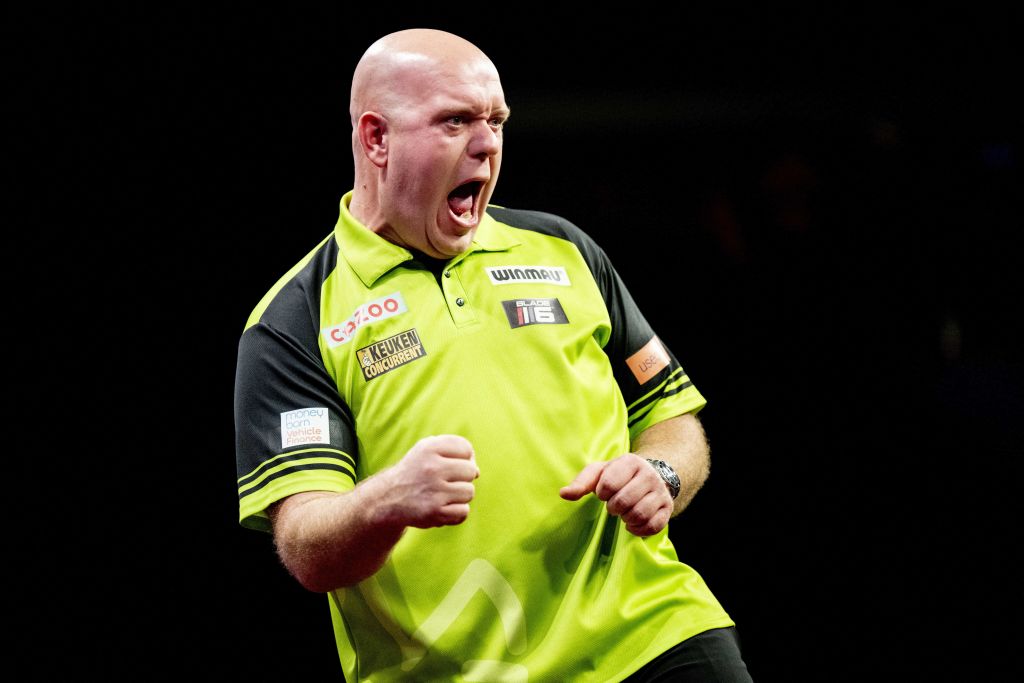 Michael van Gerwen was far from his best in his opening round win over Adrian Lewis at the World Matchplay on Sunday night, but he is still confident on battling back from injury all the way to the title.

The three-time world champion is trying to regain his form after having surgery on his wrist due to being diagnosed with carpal tunnel syndrome.

It was clear that the operation had set him back during his clash with Jackpot, but he still managed to get over the line with a 10-7 win, despite averaging just 89.66.

The injury and the below-par performance has not rocked MVG’s confidence too much, still fancying his chances of a third Matchplay title and saying that even at 90 per cent, he can beat anyone else on the planet.

Asked for his expectations in Blackpool, MVG said: ‘Winning. I’m still in the tournament so that’s a good thing, but it’s always winning.

‘Of course you need to settle yourself down a little bit, but Michael on 90 per cent can still beat everyone. I always expect a lot of myself, but that’s probably also my biggest danger.’

Van Gerwen is not the only player confident of success in Blackpool this week, with defending champion Peter Wright even more bullish after his first round win.

Snakebite comfortably dismissed Madars Razma in his opening game and then claimed that the only person capable of beating him at the Winter Gardens is himself.

‘My main challenge is me, that’s the only person that can upset me winning this tournament,’ said the world champion.

‘I don’t care who comes through the other side, it will just be a losing opponent.’

Wright and Van Gerwen’s chances have seemingly been boosted by some big names falling early at the Matchplay.

Jonny Clayton was upset by Rowby-John Rodriguez in the opening round, Gary Anderson was ousted by Dary Gurney and the in-form Luke Humphries was beaten by Nathan Aspinall.

MVG must now face Masters champion Joe Cullen in the last 16, with Snakebite taking on Krzysztof Ratajski for a place in the quarter-finals.