Myanmar leader Aung San Suu Kyi and other senior figures from the ruling party have been detained in an early morning raid, the spokesman for the governing National League for Democracy said on Monday.

The move comes after days of escalating tension between the civilian government and the powerful military that stirred fears of a coup in the aftermath of an election the army says was fraudulent. 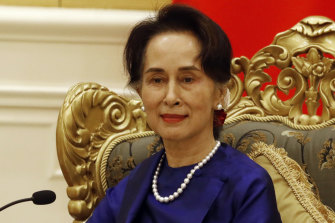 Spokesman Myo Nyunt told Reuters by phone that Suu Kyi, President Win Myint and other leaders had been “taken” in the early hours of the morning.

“I want to tell our people not to respond rashly and I want them to act according to the law,” he said, adding he also expected to be detained.

Myanmar’s military had a day earlier denied that controversial statements by its chief were meant as a threat to stage a coup, claiming the media had misinterpreted his words.

Political tension in the south-east Asian nation soared after a spokesman for the military said a coup could not be ruled out if military complaints of widespread voting fraud in last November’s election were ignored.

The commander-in-chief, Senior General Min Aung Hlaing, had told senior officers in a speech on Wednesday that the constitution could be revoked if the laws were not being properly enforced. Adding to the concern was the unusual deployment of armoured vehicles in the streets of several large cities.

The military has publicly complained several times since the polls that there was electoral fraud and called on the government and the Union Election Commission to review the results. It has said it has found 8.6 million irregularities in voter lists in 314 townships that could have let voters cast multiple ballots or commit other “voting malpractice”.

The election commission said there was no evidence to support these claims.

Parliament’s new session was set to open on Monday in the capital Naypyitaw.

The military ran Myanmar for some 50 years before beginning a transitioning to democracy in 2010. The current constitution ensures the country’s generals maintain considerable influence in the country’s affairs by guaranteeing them a quarter of the seats in parliament and control of a number of key ministries.