More than just glorified lawn mowers a tribe of goats has been introduced at Royal Park this winter in an attempt to regenerating the habitat of a species of lizard.

The goats are there to munch on weeds that are threatening the survival of the White’s skink, which needs clear areas of grass and soil to thrive. 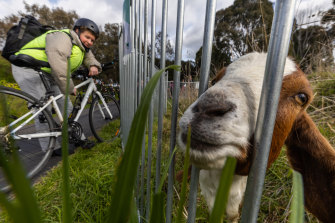 A tribe of goats has landed at Melbourne’s Royal Park. Credit:Jason South

“Here at the City of Melbourne we are not kidding around when it comes to saving the habitat of the little lizards,” acting Lord Mayor Nicholas Reece said as he unveiled the goat pens in the park.

Royal Park contains one of the most significant population of skinks in Melbourne, but their habitat is under threat from dense weed growth.

Goats are gradually being introduced to seven fenced-off plots at the park that will be removed in early spring. There are also eight additional plots that will be used as control sites and left unmanaged.

Indigenous grasses will be planted and the White’s skink population and quality of habitat will be measured again next autumn. 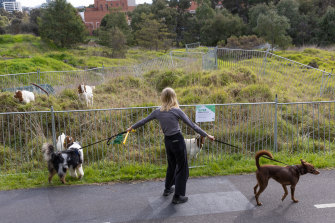 The goats are being used to control weeds threatening the White’s Skink lizards habitat. Credit:Jason South

University of Melbourne urban ecology research fellow Julian Brown said areas of the park were completely covered in weeds and this was bad for the White’s skinks because they need exposed soil and rocks to bask in the sun.

“We’re also going to be looking at ways of how we revegetate this with native species once the weeds have gone so the goats removing the grass will make that easier,” he said.

The trial, which is being conducted by the City of Melbourne and the University of Melbourne, is costing $20,000, but Reece said it was “money well spent” as the council will save money on manual weeding and pesticides.

If the trial is a success, bigger herds of goats could be set to work at Royal Park.

Passers-by have been asked not to feed the goats so they can focus on eating weeds, and members of the public have been asked to name the animals, with Reece suggesting Goaty McGoat Face.

The City of Melbourne is not the first council to employ goats. The City of Whitehorse, Knox, Whitehorse, Yarra Ranges and Maroondah also using goats for weed control in areas which are difficult to access.

In California, Google hired 200 goats and a border collie to “mow” the lawn at its Googleplex headquarters, while “hooved pros” have been deployed in New York parks.