Rampaging cow causes HAVOC as it runs riot through a suburban street and makes a mockery of hapless cops: ‘You are udder arrest’

A runaway cow has been caught on camera charging down a New Zealand police officer who tried to contain the animal rampaging through a suburban street.

Two cattle made their way through a normally quiet neighbourhood in the city of Whanganui in the nation’s north island on Monday, prompting residents to call police.

Officers arrived on the scene at about 11.15am assuming the docile bovine would be simple to round up but one of the cows charged down an officer on the grounds of an army facility. 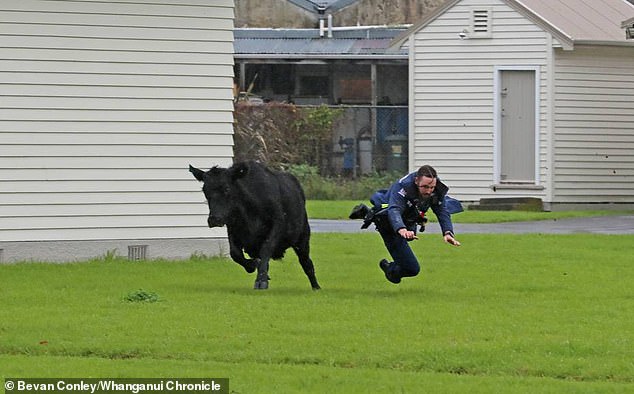 In photos shared by the New Zealand Herald, the officer is seen being hit by the fast-footed cow before falling onto the ground.

The cow then runs past the fallen officer and heads down a suburban area.

A witness who saw the event from across the road told the publication: ‘This thing just charged him.’

She explained that the cow ran down the street before more officers arrived at the scene.

According to a police spokesperson, the officer was uninjured.

Police eventually managed to contain one of the cows but the other animal was sadly put down after it got stuck in mud on a road in the suburb of Gonville. 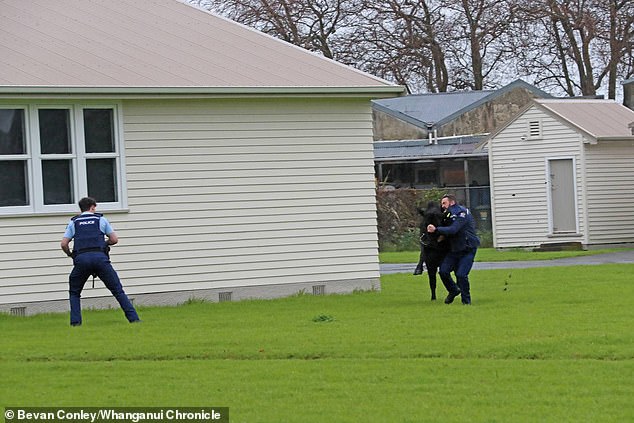 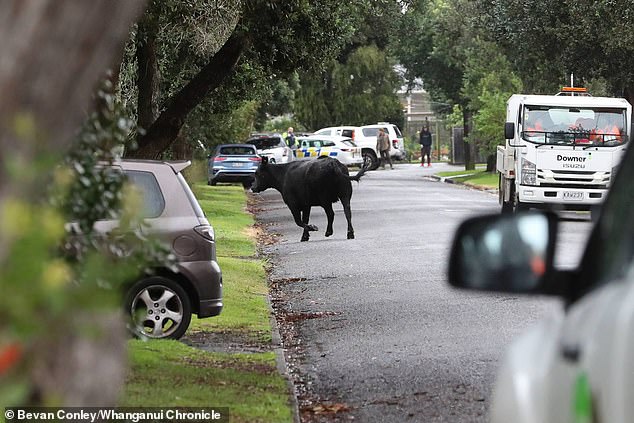 One of the cows was contained by officers, but the other had to be put down after it got stuck in mud

Commenters flooded social media after the news of the cow-catching fiasco broke.

‘What did the cow say to the Police?? ‘Moooooove over’,’ joked one.

Another wrote: ‘Does the cow have a beef with the cops ??’

Not everyone was amused by the photos, as other readers expressed their concern over the welfare of the cows.

‘This is a very frightened animal, not a ‘thing’. I sincerely hope the police don’t just shoot him/her, which unfortunately seems to be the way these matters are usually resolved,’ one woman wrote.

‘Hope she is caught without incident and isn’t too traumatized by her experience,’ said another.

One man added: ‘Very frightened animals, needed to be treated calmly and quietly.’

‘If you don’t work with cattle you have no understanding of how to get them to go where you want.’