Tokyo: As China won the first of its four Olympic gold medals on Friday, President Xi Jinping was addressing a politburo meeting in Beijing.

The meeting’s goal was to discuss modernising China’s military, a long-held ambition of the Chinese leader.

“We should do a good job in arming officers and soldiers with the thought of socialism with Chinese characteristics and ensure that the army is absolutely loyal, pure and reliable,” he said. “A strong country must have a strong military. Only a strong military can ensure national security.” 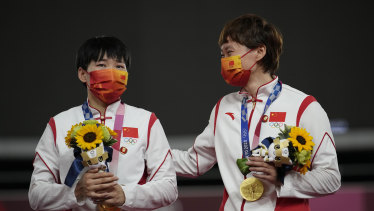 But the rhetoric and the nationalism that surrounds it could equally have applied to Chinese athletes, who have dominated the Tokyo Olympics. Xi has called sport “the epitome of a country’s strength and civilisation”. Gou Zhongwen, China’s director of sport, told athletes a week before they left for Tokyo that they should “fight for the glory of their country with pride, honour and responsibility”, Xinhua reported.

Heading into the final weekend of the Games, China appears to be reaching its zenith.

The country holds 32 gold medals, seven ahead of the United States. China is on the verge of toppling the US for the first time since Beijing 2008. Since the first Games in 1896, the US has won all but 11 Olympics. And most of the losses came at the height of the Cold War between the Soviet Union and the US, when Russian gymnasts and state-sponsored doping programs dominated all before them. 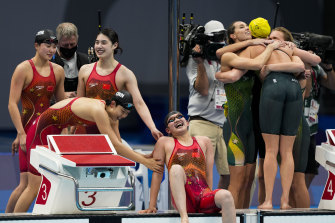 Chinese swimmers celebrate their surprise win as Australia is relegated to third in the women’s 4x200m relay final.Credit:AP

China, with its web of state-backed sporting schemes targeted at niche Olympic sports such as weightlifting and badminton, appears to be embarking on a new era of Olympic dominance. If the country matched its Olympic squad with its territorial goals by including Hong Kong and Taiwan, it would add another 14 medals, including three golds – an almost unassailable lead.

Then there is the 119 principle, which targets the 119 gold medals on offer from athletics, swimming and other water sports including sailing, canoeing and rowing, which China had historically struggled in but offered high medal counts.

By targeting these sports China received a maximum return on investment, according to Jinming Zheng and Shushu Chen from Loughborough University in England. If it tops the medal table on Sunday, it will all be seen as having been worth it.

But it has also opened up national targets that are now colliding with unrealistic expectations and nationalist fervour. 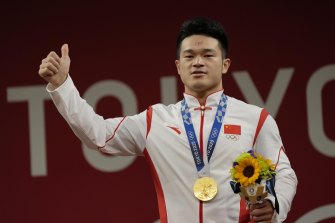 Shi Zhiyong of China celebrates his gold in the men’s 73kg weightlifting in Tokyo.Credit:AP

When Bao Shanju and Zhong Tianshi stood on top of the medal dais at the women’s track cycling on Monday they wore Mao Zedong pins. Chinese swimmer Zhang Yufei said she felt “the power of China” drive her to victory in 200-metre butterfly. Weightlifter Shi Zhiyong said he won because it was the 100th anniversary of the Chinese Communist Party.

The costs of falling short are also becoming more severe.

After China’s Liu Shiwen won silver in the mixed table-tennis doubles all she could muster was a tearful apology: “I’m very sorry to you all”. Wang Luyao, the 10-metre air rifle shooter, was hounded online for not being sincere enough in her apology for not making the finals. China’s male badminton players were labelled a disgrace for losing in that gold medal match to Taiwan, its island neighbour. 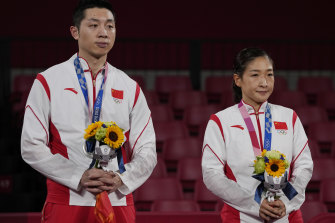 Insert geopolitics into this heady mix of national pride, drive and failure, and China’s Olympic ambitions could start to become a lot more complex.

The BBC was admonished by the Chinese embassy in London this week for calling Taiwan, Taiwan, which Beijing regards as a renegade province. The International Olympic Committee struck a deal with China in 1984 when it entered the Olympics. China would compete as China, while Taiwan would be referred to as Chinese Taipei, effectively recognising China’s claim over this democratic island of 25 million people.

“There is only one China in the world, Taiwan is an inalienable part of Chinese territory, and the government of the People’s Republic of China is the sole legal government representing the whole of China,” the embassy said.

That China lost to Taiwan in men’s badminton – historically one of its most dominant events – has only heightened the sensitivity of China’s diplomats to any geopolitical infractions.

Taiwanese President Tsai Ing-wen was having none of it, congratulating the team for “winning the first badminton gold medal in our country.” 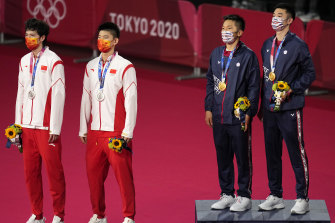 In Hong Kong, now a Chinese territory, the reaction from its leader could not have been more different. 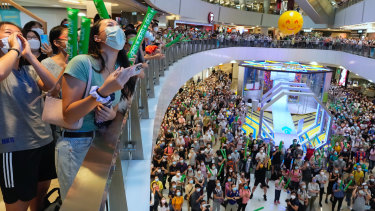 In the shopping malls where the matches were broadcast live, fans yelled “We are Hong Kong” as the Chinese national anthem accompanied the Hong Kong flag raising in Tokyo.

In her office, the city’s Chief Executive Carrie Lam watched on. On the right of the TV screen was a Hong Kong flag. On the left, a Chinese flag, twice its size.