People in Oxford University’s coronavirus vaccine trial weren’t told when they were given a dose that was too small until months later, an investigation has revealed.

Ethics experts said they were concerned scientists informed volunteers about the blunder in a letter that was packed with ‘gobbledygook’.

The error caused controversy late last year when it emerged around 1,500 people taking part in a trial of the Oxford jab had been given a dose that later turned out to be significantly smaller than it should have been.

Although academics insist they knew the dose would be smaller, they didn’t know by how much until the participants found they didn’t develop any side effects.

Oddly, the trial found the 1.5-dose regimen – all participants were given a full dose the second time – performed better than the planned two-dose regimen, blocking 90 per cent of Covid cases, compared to 62 per cent.

But now experts have raised concerns about the way people who were affected in the trial were told about it, Reuters reports. 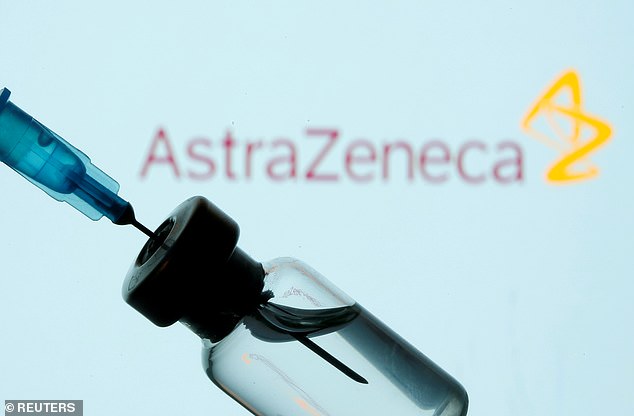 Oxford University and AstraZeneca’s coronavirus vaccine has been one of the biggest successes so far, with trials showing it works well and manufacturing steaming ahead to millions of doses per week already (stock image)

Professor Emma Cave, a healthcare law expert at Durham University, told the news wire: ‘Presenting the dosing variation as a planned change in the study is potentially a breach of trust if in fact the dosing resulted from an error.

‘The letter makes clear the dosing change but not the reason for the change.’

And Dr Arthur Caplan, a medical ethicist at New York University, said the important information in the letter to participants was ‘lost in a snowstorm of verbiage’.

He said: ‘To me, that qualifies as gobbledygook. What you want to know is, why are they doing this, we made an error, it involved dosing, we’re not worried about it.’

Reuters said it obtained a copy of the letter from Oxford University, which was sent to the affected trial participants in June last year. The trial of the jab began in May.

The letter was two pages long and told people taking part about ‘recent changes in the study’.

Researchers running the trial explained some people had unintentionally received a half-dose in the first instance.

But rather than admitting this had happened by accident – a claim the university strongly refutes – the scientists reportedly said it was part of a planned arm of the trial that would test different sized doses because they were ‘not sure what dose of vaccine is most likely to be protective against Covid disease’.

An Oxford University spokesperson said today: ‘We have not stated a dosing error occurred and all participants have been kept fully and accurately informed throughout the trial.

AstraZeneca has agreed to provide an extra nine million vaccine doses to the EU, the bloc has announced, after an extraordinary export ban row.

The British-Swedish manufacturer will provide 40 million doses for the EU by the end of March – still only half of what it had originally promised.

Prime Minister Boris Johnson has assured Britons that the UK’s virus supply would not be affected by the ‘toings and froings’ of the EU.

However, he also warned that there was no point in just the UK getting vaccinated and that it was important EU countries did too.

It comes after the issue of vaccine supply triggered a row between the EU and the UK.

The row blew up spectacularly when Eurocrats overrode part of the Brexit deal to create a hard border on the island of Ireland to stop doses getting into the UK through Northern Ireland, which is still in the Customs Union.

‘You will have seen all this stuff in the papers about our friends across the Channel and disputes with them,’ the Prime Minister said yesterday.

‘All I would say is whatever the toings and froings there, we’re very confident in our security of supply.

‘We will continue to take steps to protect the UK’s security of supply and also to ensure that we ramp up our own manufacturing.’

‘The half dose group was unplanned, but we did know in advance that there was a discrepancy in the dose measurements and discussed this with the regulators before dosing and when the dosing was revised. Trial participants were informed of the different dose measurements in the letter of June 8.

‘No communications with trial volunteers can be made without prior ethical approval and changes to the trial design have regulatory and ethical approval. In the case of the letter of June 8, this was via the South Central Berkshire Research Ethics Committee.’

The difference in dosing emerged last year when one of the bosses at AstraZeneca, the jab manufacturer, revealed that it had happened.

A problem with the equipment that measured the strength of doses meant that one batch was ‘over-estimated’, so they toned it down to avoid giving people too much.

They pressed ahead with the trial, with the blessing of the UK’s drug regulator the MHRA, and gave those volunteers – and all other volunteers – full doses for the rest of the study, the team explained as their results were published yesterday.

And later, when those people didn’t get side effects that were as strong, the researchers found out exactly how much smaller the doses had been.

The study results showed them that the vaccine was 90 per cent effective when given that way, compared to 62 per cent when given in two full doses.

The university has since fiercely refuted claims that this happened by accident, saying they knew beforehand that the dose was going to be smaller.

Professor Adrian Hill, from Oxford’s Jenner Institute, has insisted the team were fully aware of the change in doses before they checked the efficacy of the vaccine.

He said after the difference was identified the team opted to stick with a two full-dose regimen, but still monitor the volunteers who received a half-dose. They quickly saw the latter may have worked better.

‘There were fewer sore forearms, less people with fever and so we knew within days that it was probably the other measure that was right and indeed it is,’ he told The Times.

‘We liked it so much we carried on with it because it was safer – lower doses often are – and equally immunogenic. And there is some evidence it may be more effective. So what’s not to like?’

Claims it had happened by mistake came after AstraZeneca’s head of biopharmaceutical research, Dr Mene Pangalos, said they didn’t realise about the half-dose until later in the trial.

He told Reuters in November that the discovery that it worked better was a lucky accident. He said: ‘The reason we had the half dose is serendipity.’

Dr Pangalos said researchers were confused when they noticed volunteers in the vaccine group were reporting much milder side effects, such as fatigue, headaches and arm aches, than they originally predicted.

He said: ‘So we went back and checked … and we found out that they had underpredicted the dose of the vaccine by half.’

‘That, in essence, is how we stumbled upon doing half dose-full dose (group),’ he added. ‘Yes, it was a mistake.’