More than 40,000 members of the Rail, Maritime and Transport (RMT) union at Network Rail and 15 train operating companies will walk out in a row over jobs, pay and conditions for the third time this week, after strikes last Saturday and Wednesday.

Just one in five trains will run as normal today and large parts of the country will have no services running at all, while trains that do run will only operate between 7.30am and 6.30pm. Among the 15 services affected are the London Overground, CrossCountry, C2C, South Western, Southeastern and East Midlands Railway.

Today’s action – which coincides with mass walkouts by members of the Transport Salaried Staffs Association (TSSA) – will also impact services north of the border, with ScotRail warning the ‘vast majority’ of trains in Scotland will not run on the day. Trains will be limited to 7.30am to 6.30pm between Milngavie and Edinburgh via Bathgate (two an hour) and one train an hour between Glasgow and both Lanark and Larkhall.

Network Rail said people should ‘only travel by train if your journey is absolutely necessary’ and warned the knock-on effects will also disrupt some services tomorrow. Services will start later than normal on Sunday morning as workers return to duties.

Though workers managed to avoid the worst of the strike on Wednesday by WFH, business leaders have warned that the industrial action is wreaking havoc on the UK’s tottering economy and plunging the already beleaguered hospitality industry into crisis. For football fans, today’s mass walkouts are likely to cause another weekend of carnage, with the strikes set to blight journeys to five Premier League games, including clashes between Man City, Spurs and Chelsea.

Mr Lynch – a 1970s-style firebrand who has modelled himself on Thatcher’s arch-rival Communist Arthur Scargill, reportedly earns £124,000-a-year including perks and has vowed to unleash more strikes into next year unless a deal is reached – has written to Transport Secretary Anne-Marie Trevelyan saying the Government should ‘give train operators the remit to negotiate a settlement… that meets our aspirations around job security, pay and working conditions’.

Miss Trevelyan has urged unions and train companies to ‘come together and find something we can all live with’, with passengers ‘at the centre of everyone’s decision-making’. 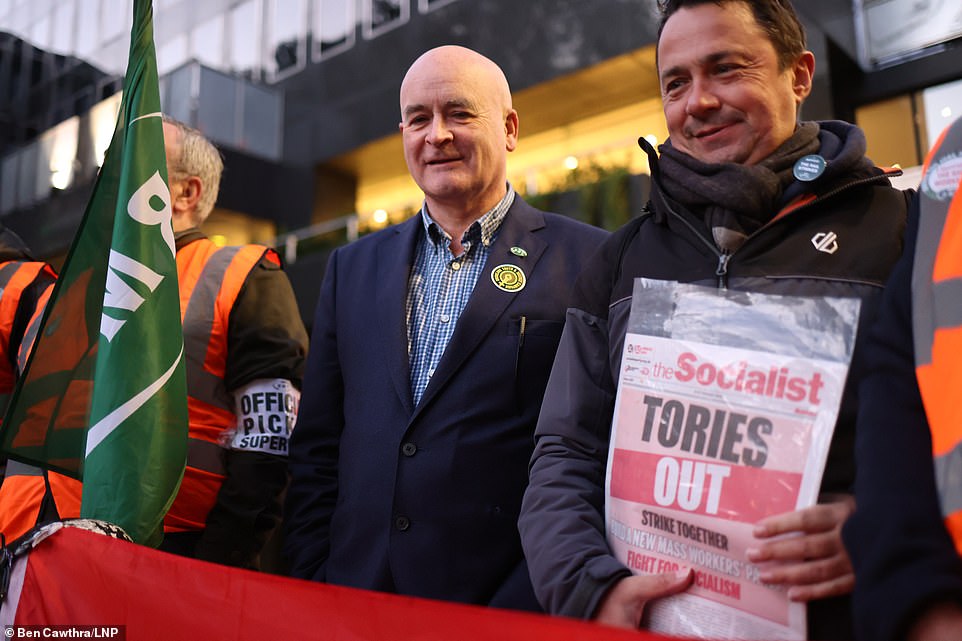 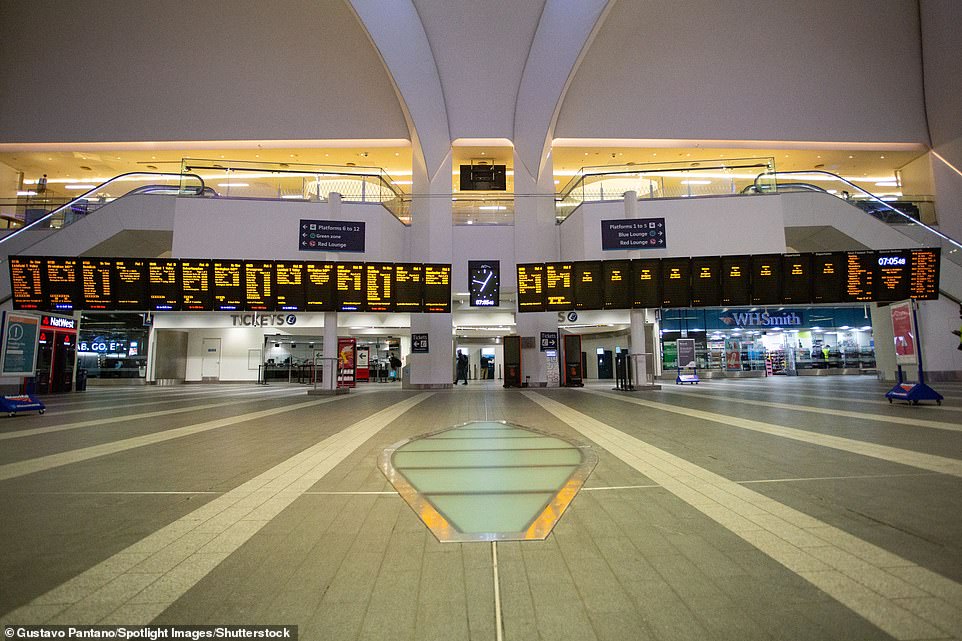 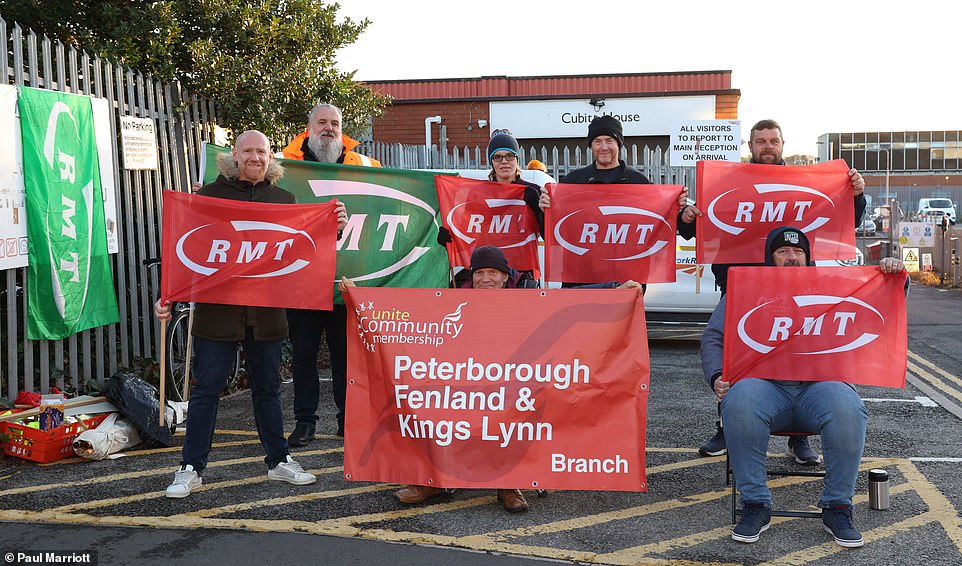 PETERBOROUGH: Strikers from the RMT outside a depot as workers go on strike 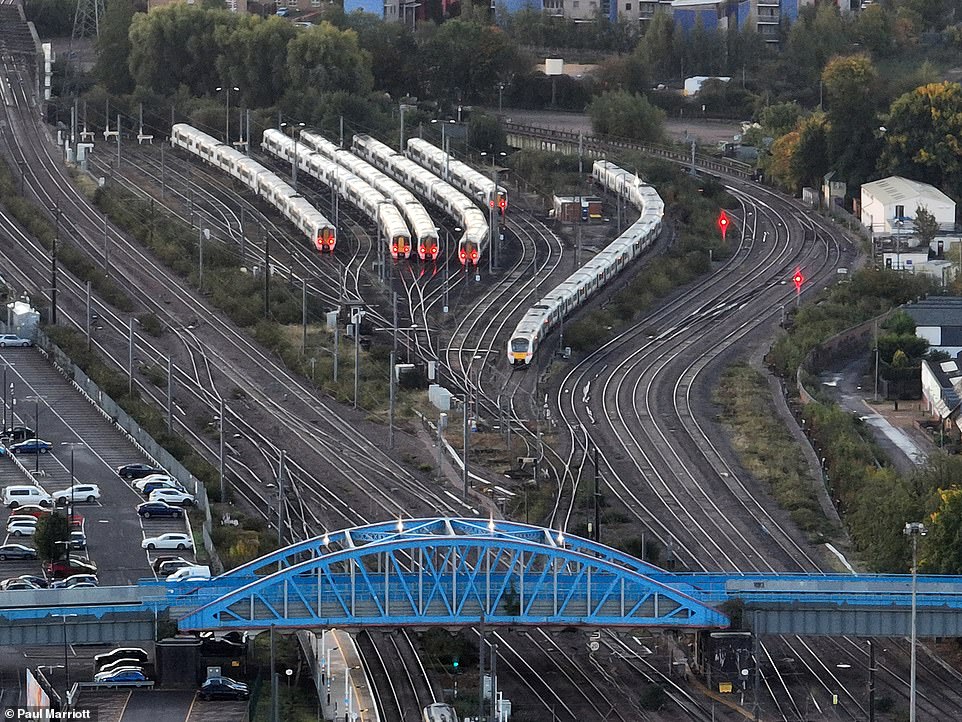 PETERBOROUGH: Trains lined up in sidings in Peterborough as 40,000 rail workers go on strike 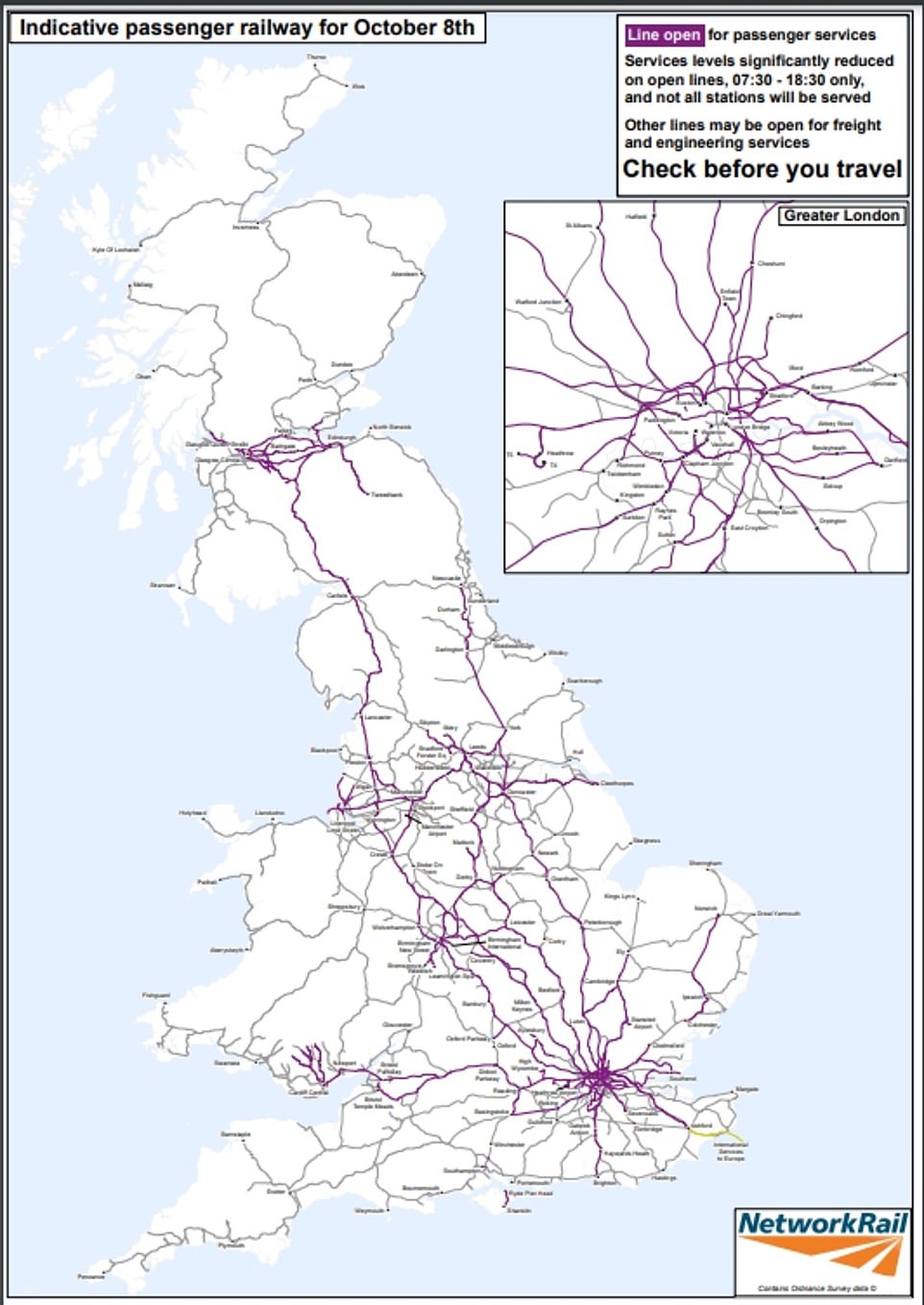 Avanti West Coast: Services will be reduced significantly, with those running expected to be very busy

Chiltern Railways: Its service will be significantly reduced – only travel if necessary

Greater Anglia: Heavily-reduced service in operation with trains expected to run from 7.30am to 6.30pm

Great Northern: Passengers are urged to travel only if absolutely necessary

Great Western Railway: An extremely limited service will be in operation. Avoid travelling. Services will begin at 7am and all journeys must be completed by 6.30pm

London Overground: No services running between 4am and 8am. No service after 6pm

Northern: Severe disruption is expected to all its services – plan ahead

Southeastern: A limited service will be in operation. Passengers are urged to only travel if absolutely necessary

South Western: Severely reduced service running between 7.15am and 6.30pm on some route. The rest of the network will be closed

Southern: People are being urged to travel only if absolutely necessary

TransPennine Express: Avoid all unnecessary travel. A timetable can be viewed here

West Midland Trains:  Expect major disruption. A significantly reduced timetable will be running from 7.30am to 6.30pm on limited routed

Thameslink – Only travel if absolutely necessary. A severely reduced service will be running, with many stations not being served. If you do travel, please check your journey and expect disruption.

TSSA members are seeking a guarantee of no compulsory redundancies and a pay rise that meets the cost-of-living crisis.

General secretary Manuel Cortes said: ‘We saw only last weekend that our strike action was rock-solid across the country. Our brilliant members remain determined to see their demands met in the shape of a just settlement. We do not strike lightly but are prepared to dig in as we seek a fair deal on pay, job security and conditions in the face of cuts, economic collapse and a cost-of-living crisis at the hands of this chaotic Tory Government. With more strikes and wider industrial action in the offing this week, it’s time for ministers to get wise and act now to deliver a fair deal which will halt a winter of rail misery across the network.’

Daniel Mann, director of industry operations at the Rail Delivery Group, said: ‘These strikes disrupt the travel plans of millions of passengers and undermine businesses who continue to struggle with rising costs and this continued action will only further damage the railway’s recovery.

‘While some rail companies are not involved in the strike, services are likely to be busy, severely disrupted or in some cases not running, so passengers should check the latest travel advice before setting off.’

Business leaders have lashed out at the industrial action, with Kate Nicholls, chief executive of UKHospitality, warning: ‘Given Saturday is usually the busiest day of the week for most hospitality venues, another weekend rail strike will be a further blow to businesses in the sector which are already grappling with record staff shortages and facing a tsunami of rising costs.’

Phil Campbell, ScotRail’s head of customer operations, said: ‘We’re really disappointed that the dispute with the RMT has reached this outcome, given the strength of the improved pay offer ScotRail made.

‘This strike action does nothing for the railway’s recovery at this fragile time. It will severely impact our customers and it will also cost our staff through lost wages.’

He added: ‘Due to the large number of ScotRail staff who are members of the RMT, ScotRail customers should expect significant disruption to services on Monday October 10, as we won’t be able to operate the vast majority of our services.

‘We’re advising customers to seek alternative means of transport and to only travel if they really need to on Monday October 10. We remain open to resolving this dispute.’

It comes as ministers placed Avanti West Coast on a short-term contract after providing an ‘unacceptable’ service to rail users. It has until April 1 to improve its services, the Department for Transport said.

Urging the Transport Secretary to ‘unshackle’ the railway companies and allow them to reach a settlement with the rail unions, Mr Lynch wrote: ‘I am writing following your comments at the Conservative Party Conference last weekend in which you said that there is a ‘deal to be done’ between the rail unions and train companies in relation to the ongoing industrial disputes.

‘I am also hopeful that a negotiated settlement between the RMT and the employers can be reached. However, for this to be achieved, your Government must unshackle the train operators who currently take their mandate directly from yourself.’

In a statement, the Department for Transport urged union bosses to work with their employers ‘not against them’.

‘For the third time this week, and second weekend in a row we face disruption and disarray on our railways,’ a DfT Spokesperson said.

‘Weekend rail travel has been on the rise since the pandemic as people travel to support their favourite sports teams, meet loved ones or go to events. These plans are all now jeopardised and our economy is damaged as a result.

‘Our railway is in desperate need of modernisation but all strikes will do is punish the very people unions claim to stand up for and push passengers further away. We urge union bosses to reconsider this divisive action and instead work with their employers, not against them, to agree a new way forward.’ 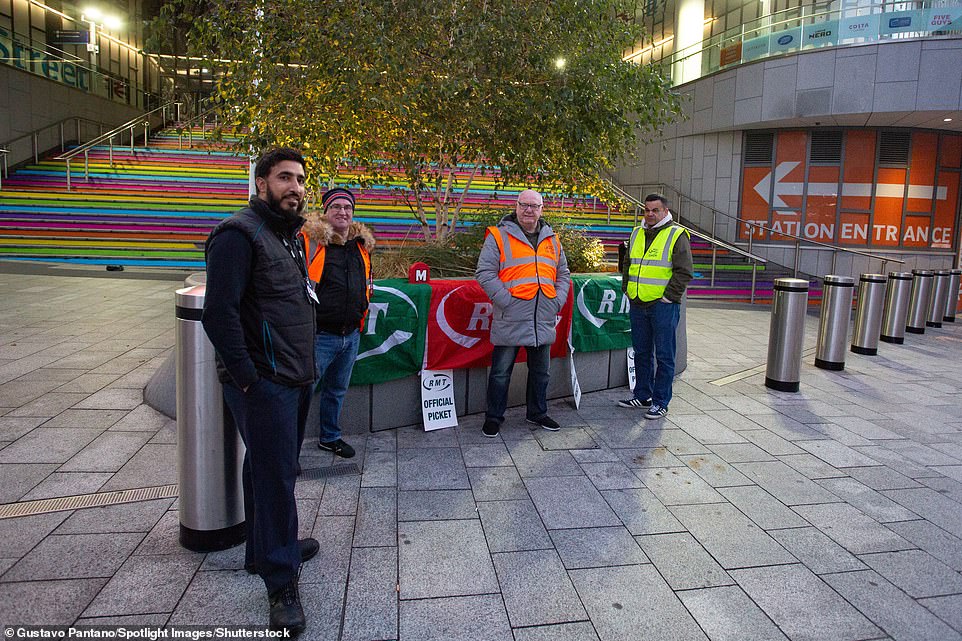 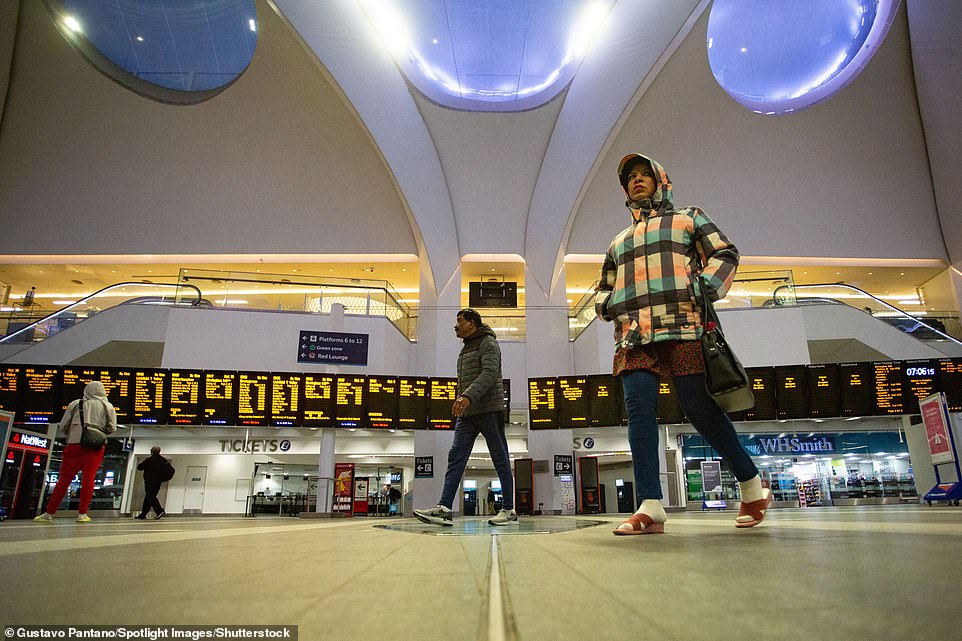 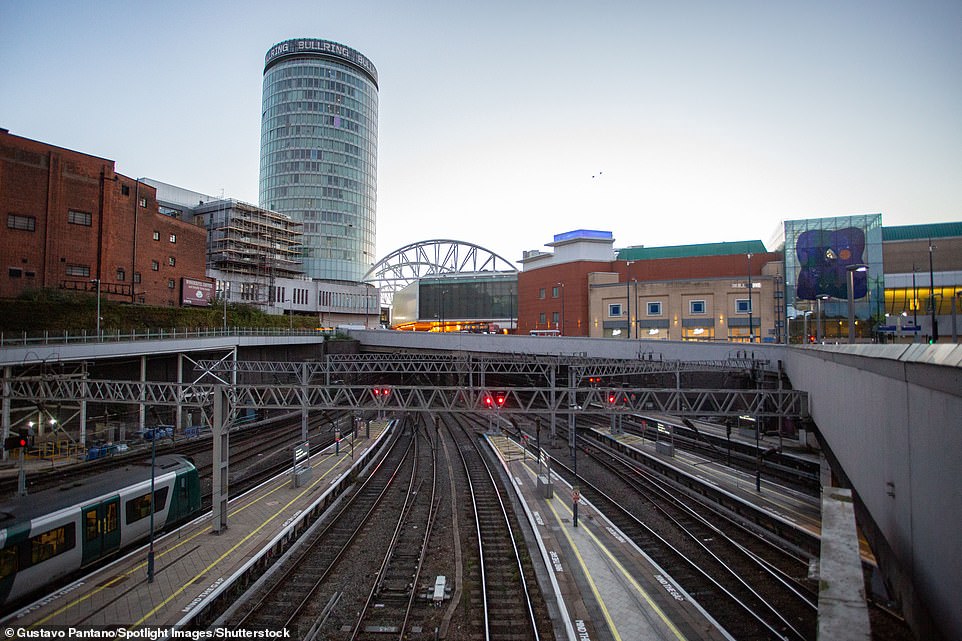 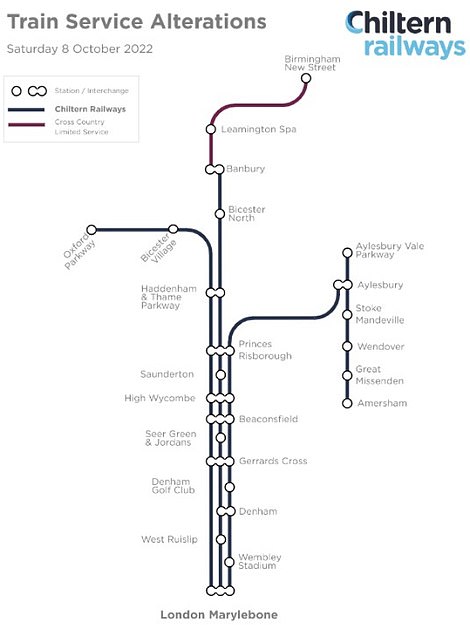 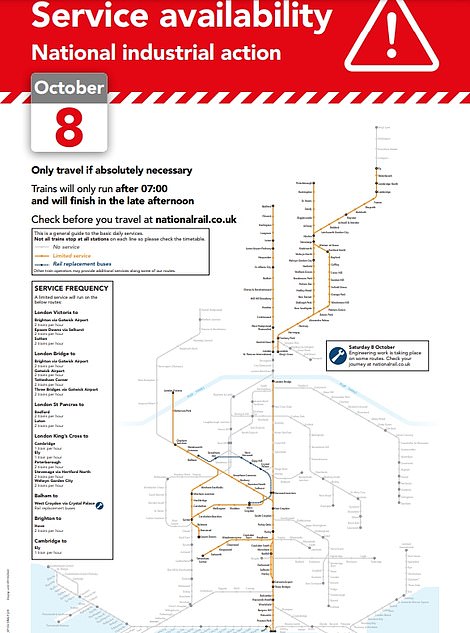 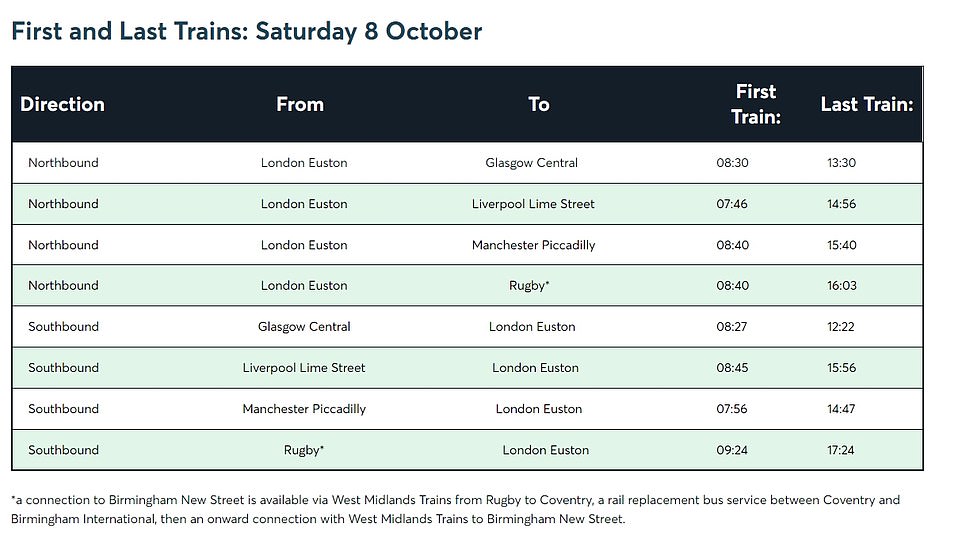 The Office of Rail and Road said it commissioned independent consultants to establish whether rail industry employment costs are higher or lower than ‘market comparators’.

The study found that total reward – which includes pension costs and other measurable benefits – for maintenance workers at Network Rail is ‘18% above the market median’.

‘And if it means RMT members’ wages are higher than the market rate, there is something wrong with the market.’