SNP politician Karen Adam calls in police after she is threatened with being ‘put through a wood chipper’ over her tweet saying paedophiles are ‘our family, friends and colleagues’

A Scottish politician has claimed a furious mob told her she would be ‘put through a woodchipper’ as police say they have launched a probe into the alleged death threats made against her.

Karen Adam, 46, a Member of Scottish Parliament, claims she was told to kill herself and had her personal details shared online. Police Scotland has said it will investigate the MSP’s allegations.

Speaking after the ordeal, she revealed her growing anxiety and said she was ‘worried for mine and my family’s safety’.

The Banffshire and Buchan Coast MSP – who said she is a survivor of child sexual exploitation – faced a backlash after tweeting about paedophiles last week.

Ms Adam had said that abusers were often not ‘Mac-wearing flashers in the street’, but more commonly were ‘our family, friends and colleagues’.

She added: ‘It’s uncomfortable to humanise them because we then have to face the horrors in plain sight.’

Her words were interpreted by some, including Alba Party general secretary Chris McEleny, as an attempt to humanise those who abuse children – something the MSP firmly rejected. 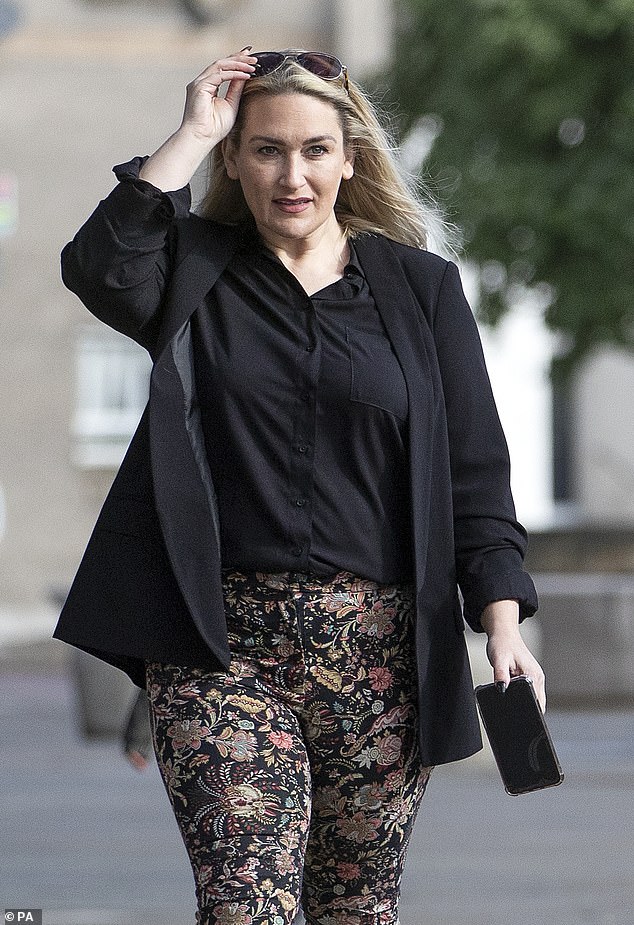 Karen Adam, 46, a Member of Scottish Parliament claimed a furious mob told her she would be ‘put through a woodchipper’ after tweeting about paedophiles

The Banffshire and Buchan Coast MSP – who said she is a survivor of child sexual exploitation – faced a backlash after saying abusers were often not ‘Mac-wearing flashers in the street’, but more commonly were ‘our family, friends and colleagues’

On Monday, in a tweet posted just after 3am, Ms Adam said she had received death threats as a result of her original tweet and signalled she could pursue legal action.

‘Can’t sleep, not eaten. I’m worried for mine and my families safety after I was just told my personal details are now being shared,’ she wrote.

‘Death threats, vile abuse, told to kill myself. Told I’d be put through a wood chipper.

‘Grateful for litigation advice. I’m off for a wee bit.’

Ms Adam later added that her life has been ‘put in danger’ and said she was determined to continue raising awareness on paedophilia for ‘our kids’.

A tweet shared on Tuesday afternoon read: ‘Gaslighting is to purposely cause confusion. Sometimes to deflect, or for power. Some do it on mass scale for political motivations.

‘You all certainly saw through it. You know it, I know it.

‘My life has been put in danger. The tweet causing it is still up. No apology has been given.

‘Keep on raising awareness on this for our kids. Never let predators hide in plain sight or allow others to throw scent.’

Police Scotland said it has received reports of threats made against Ms Adam, and was currently investigating.

A spokesperson for the force said: ‘We can confirm that a complaint has been made regarding online threats and police inquiries are ongoing.’