Crowds gathered outside Sussex Police HQ on Saturday afternoon to demand answers over the death of a university lecturer’s son who was hit by an unmarked police car.

Led by his brother Karl, the crowd demanded justice for Arthur Holscher-Ermert, 27, who was killed by police in a high speed car chase on Saturday night.

They accused the police of criminal conduct for Arthur’s death and trying to cover the crime up after the police car are alleged to have swerved to hit him. Officers then tried to handcuff him as he was dying.

The call that every parent dreads came in the early hours of last Sunday morning, waking Bournemouth University Professor Jens Holscher from the depths of sleep.

‘It was 4.15am,’ he says, checking the exact time on the call list on his mobile phone. ‘A police officer asked if I had a son called Arthur and then she said that he had been in an incident involving a police car and that he was dead.’

Professor Holscher’s son, Arthur Holscher-Ermert, was the one who had died in Peacehaven, East Sussex, last Saturday night after being struck by an unmarked police BMW. 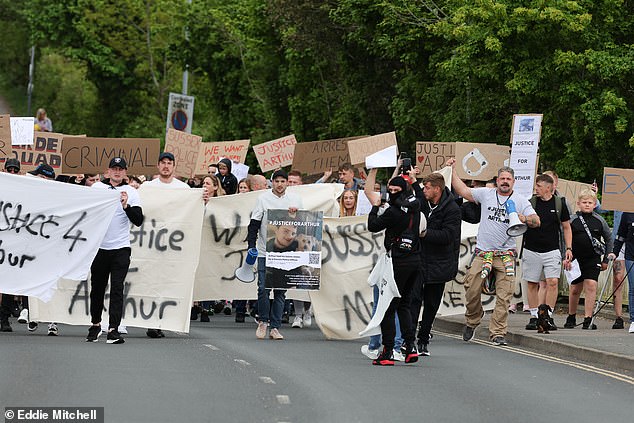 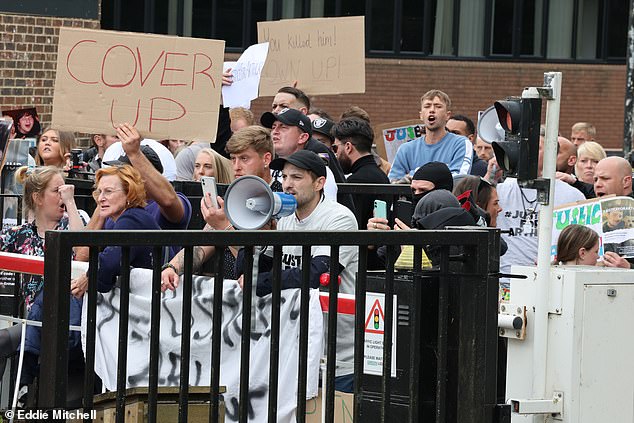 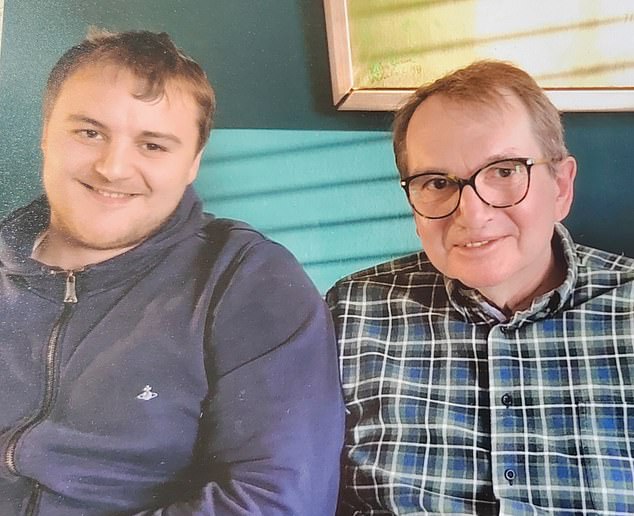 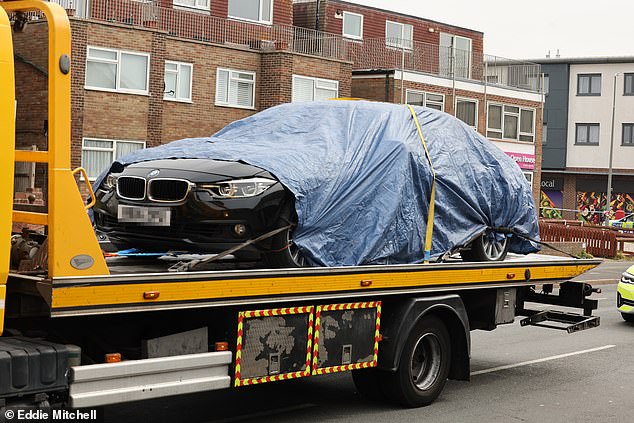 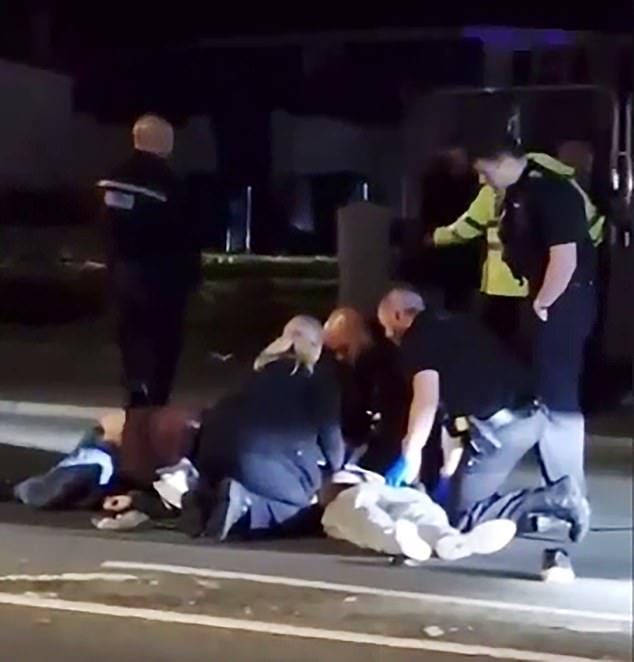 His dying moments were captured on the mobile phone cameras of at least three bystanders and have since gone viral on social media — along with the claims of other eye witnesses who allege that the car driven by Sussex Police deliberately swerved towards Arthur and ‘mowed him down’.

For his family, the footage makes devastating viewing.

A dash-cam recording shows the moment Arthur was struck as he ran across the road. A second clip shows him on the floor, groaning and writhing in pain while being restrained and handcuffed by uniformed officers. A third shows him on his back, next to a pool of blood, as a female officer pumps his chest.

And while an investigation by the Independent Police Complaints Commission is already under way, and a police officer is the subject of a criminal investigation, a wave of outrage has been growing steadily all week, with #justiceforArthur trending online. A demonstration march is planned to take place today outside Sussex Police headquarters in Lewes. 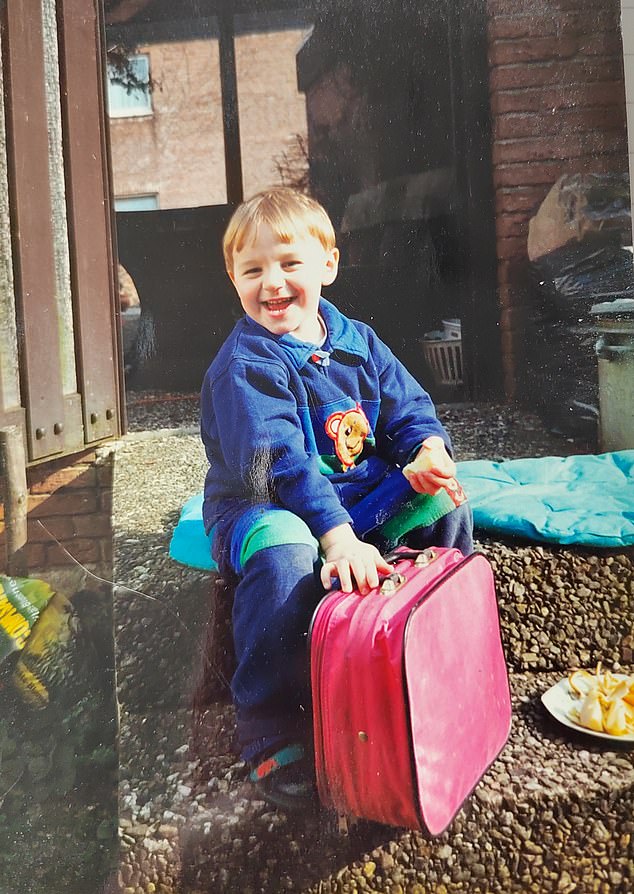 Dad Jens got the early hours call all parents dread: Arthur (pictured as a tot) had been killed

Arthur’s father, a 60-year-old economist from Springe, near Hanover, in Germany, who has lived in the UK since the 1990s, says he will be among protesters demanding answers. But at this very moment, in the sitting room of his apartment in Bournemouth, he is still in shock; too stunned to comprehend that his beloved and ‘big-hearted’ son is no longer here.

‘There is grief for Arthur but my head is spinning like a carousel,’ he says. ‘I cannot understand how this can have happened. As far as I am concerned, a police officer has murdered my son and no one can tell me why.

‘Arthur deserves justice and it’s my job now to make sure that he gets it. I won’t stop until I do.’

Professor Holscher was on his way home to the UK from Germany last weekend, staying in a motel near Aachen with his 68-year-old partner, Sonja, when he received the phone call from a Dorset police officer to tell him that the younger of his two sons was dead.

‘It was impossible to believe it was true,’ he says. ‘I thought I’d wake up properly and it would be a nightmare and I’d phone Arthur and he’d be perfectly fine. It’s a completely unreal situation.’

Next week would have been his son’s 28th birthday. Passionate about animals, Arthur was working as a dog breeder, specialising in bulldogs and dachshunds, and was saving for a deposit to buy a house with his girlfriend. 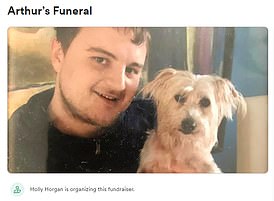 A family friend has set up a GoFundMe fundraiser to cover the costs of Arthur’s funeral.

In a post, Holly Horgan said: ‘Arthur was a very loved brother, son and friend who tragically lost his life at the hands of Sussex police.

This fundraiser is to help with funds for Arthur’s funeral. All donations will be handed to Karl.’

Writing on Facebook, Karl said: ‘A close friend of mine and Arthur’s has set this up for us, I know a lot of people wanted to contribute towards funeral costs and legal fees etc so here is a go fund me page set up for any donations people wanted to make’.

‘He was really happy that he’d found someone serious. He felt that his life was coming together,’ says his father.

The circumstances leading to Arthur’s death are still not clear, but according to friends, he had gone out to one of the fast food restaurants along the A259, the main road through Peacehaven.

A friend claimed this week that police had started pursuing him because the Audi he was driving was not insured — something a police patrol car would have picked up in a routine registration check — and Arthur is thought to have sped off before ditching his car and continuing on foot.

He was running across the road when he was struck by the black BMW, one of two cars giving chase.

Exactly how a young man could die in such circumstances is a question that demands answers.

Admittedly, Arthur had been in trouble with the police before — he had a previous conviction for possessing cannabis and had also faced court over driving offences — but as Professor Holscher says, while the police may have had good reason for pursuing his son that night, their reaction was wholly disproportionate.

‘Is that what police do, run over people who don’t have insurance?’ he asks.

‘Arthur wasn’t a terrorist, a killer or a child abuser. He might have done something wrong but he didn’t deserve to die.’

Arthur’s girlfriend, Angel, 37, a mother of two, told the Mail how he was banned from driving but had bought a blue Audi Q6 six weeks ago, ready to drive when the ban ended in July.

He’d headed out at 10.45pm to get a burger — and was spotted by police. ‘Just before he left he kissed me on the forehead and told the children to take care of me. It’s impossible to believe now that it was the last time I would see him alive.

‘I am in shock. I can’t believe he’s gone. He was like a father to my children. He took them to school most days and picked them up. He helped them with their homework. He was so kindhearted. I haven’t even told them yet — this will devastate their lives.’

Arthur’s death is now being examined by the Independent Office for Police Conduct (IOPC), which said this week the officer involved will be investigated for ‘potential gross misconduct’. As well as interviewing the officer, it is likely to look at dash-cam and body-cam footage and radio transmissions. 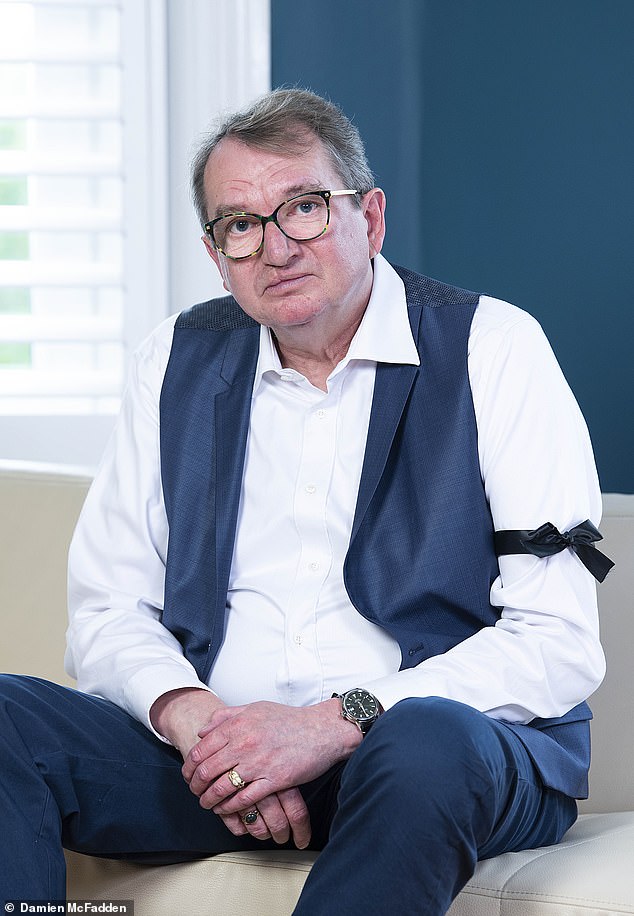 Jens, a Bournemouth University professor, said he is devoted to getting justice for his boy

Sussex Police say the officer, who is now on ‘restricted duties’, is under investigation ‘for the offence of causing death by dangerous driving’. Superintendent James Collis added that his force was ‘providing every assistance to the IOPC to allow for a thorough investigation and for the family to receive the answers they need’.

For Professor Holscher, who is also planning to take legal action against Sussex Police over his son’s death, these investigations cannot come too soon.

‘The police crossed a line which should never have been crossed and then, when he was already nearly dead, they restrained him and tried to put handcuffs on him,’ he says. ‘How can this be allowed to happen? I just can’t understand it.’

He is critical of Sussex Police for failing to visit him to offer their support or an apology. It is unlikely they will do so before the IOPC completes its investigation.

Cases such as Arthur’s are rare. The IOPC’s statistical report on ‘Deaths During or Following Police Contact’ show that in the year 2019/2020 there were 24 road traffic fatalities involving police in England and Wales. Of those 24, 19 were ‘pursuit-related incidents’, and of those 19, only one victim was a driver who, like Arthur, had exited his car and set off on foot before being hit by a police car.

Of the 25 road traffic fatalities that occurred in 2020/21, there were no such deaths.

What makes Arthur’s case stand out is the number of eye witnesses.

‘We all saw it,’ says one on a video clip later sent to Arthur’s family. ‘They were chasing him but they’ve hit him with the motor and he’s hit his head on the ground.’

A witness who spoke out this week, giving his name only as Matt, said he was about 200 ft away when Arthur was hit.

‘A black BMW and a blue Audi came round the corner,’ he said. ‘Their blue lights came on and the BMW swerved over the road and hit this bloke.’

He said that he and his friends found Arthur laying in the road.

He was ‘rolling around the floor in pain and in shock. There was a pool of blood around him and they were still trying to cuff him.

‘My friend held his head until he died,’ Matt said.

Last weekend wasn’t the first time Arthur had been involved with the police. In 2018, he appeared at Eastbourne Magistrates’ Court, where he pleaded guilty to being in possession of a quantity of cannabis and was ordered to pay £85 costs.

In 2019 he appeared in court for drug driving, possession of cannabis and driving without a licence.

Professor Holscher was aware of some of his son’s troubles: ‘I knew about the cannabis. I didn’t like him doing it but what could I say? He didn’t want to listen to me.’ 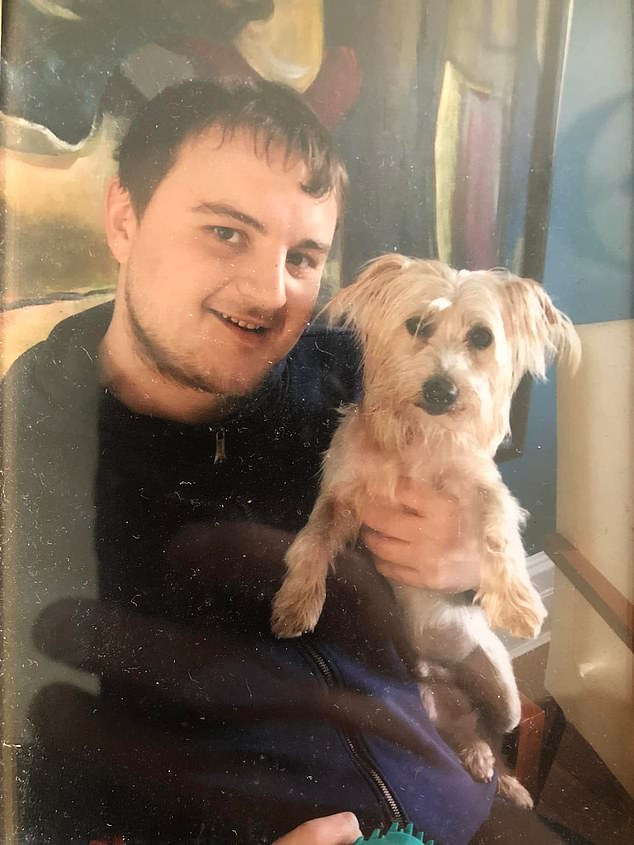 Arthur Holscher-Emert, pictured with his adorable pet dog, was hit by a police car last week

Like his older brother, Karl, Arthur was a pupil at the Priory School in Lewes, a highly regarded mixed comprehensive attended by the children of many academics from Brighton and Sussex universities, and where television presenter Piers Morgan was once a pupil.

Arthur was popular at school, says Professor Holscher, but neither of his sons took after their academic parents. Karl, 30, runs his own carpentry business and was, he says, ‘more focused’.

‘Arthur was more emotional,’ he adds. ‘Very big-hearted. He was a different character. So many people loved him.’

Professor Holscher took up his position at Bournemouth University, in Dorset, around the time Arthur finished school. He and his brother preferred to stay in Sussex with the friends they had grown up with.

In the years that followed, Arthur took various jobs, working as a car salesman and as a decorator.

‘I was never worried about him,’ says Professor Holscher. ‘He was happy with life. He wasn’t a calculating person.’

Arthur was devastated by the death of his mother, Karin, in 2018. ‘It was a big shock for all of us. But Arthur dealt with it well.’

They spoke frequently on the phone but the last time he saw his son was in February, when the entire family came together in Bournemouth to celebrate Professor Holscher’s birthday.

A group photograph shows 6 ft 3 in Arthur smiling and cradling one of his father’s dogs.

‘It was such a happy day for all of us,’ says Professor Holscher.

Three months on, Arthur’s body is in the morgue at Eastbourne Hospital, where pathologists are scheduled to carry out a post-mortem examination this week.

As soon as Arthur is released to him, Professor Holscher will organise a funeral in Brighton and plans to inter his ashes alongside those of his mother, at Harbour View crematorium near Poole, in Dorset.

Laying his son’s memory to rest will be a more arduous and painstaking process as he waits to find out exactly how his beloved Arthur lost his life last weekend.

And, more importantly, why.