Pay £20 for a pint…or face losing your local: Warnings thousands of pubs facing spiralling losses will close – as restaurant boss reveals his bills have soared from £2,989-a-year to £22,812

A small business owner today revealed how his energy bills are set to soar over £22,000 a year as thousands of pubs fear either having to hike the price of pints to £20 or closing altogether this winter.

James Allcock, 36, once poured his life savings into the Pig & Whistle bistro in Beverley, East Riding of Yorkshire, but warns ‘out of control’ inflation and energy costs are ‘strangling’ small businesses such as his.

While his annual electricity and gas bill once cost him £2,900, he says the cheapest quote he has been given will now see him spend more than £22,000 on energy.

Mr Allcock added that the forecasted bill is now more than his rent and will be the third highest cost after VAT and wages.

He told Sky News: ‘I’ve just found out it will cost £125-a-day just to turn the heating on in winter. That will turn a small profit-making day into a huge loss-making day.

‘I do feel a bit like the band on the Titanic, or that I’m re-arranging the deck chairs to stop it sinking’.

He now fears that other small enterprises could go under permanently without immediate and widespread government support.

It comes as one industry expert said landlords could soon be forced into hiking up the costs of a pint to an eyewatering £20 to help cover their energy bills – which in some cases have increased by more than 500%. 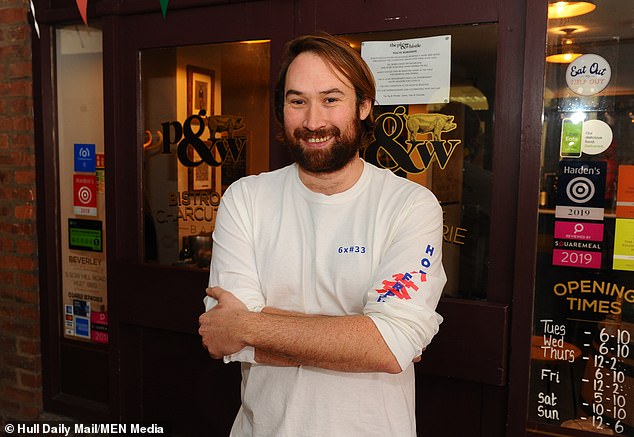 James Allcock, 36, once poured his life savings into the award-winning Pig & Whistle bistro in Beverley, East Riding of Yorkshire, but warns ‘out of control’ inflation and energy costs are ‘strangling’ small businesses such as his 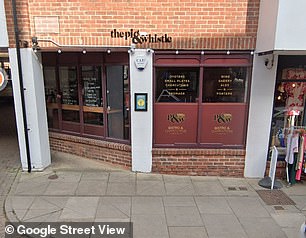 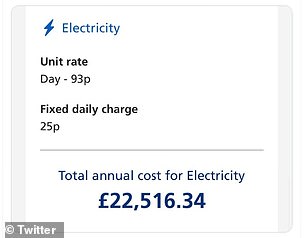 While his annual energy bills for the tiny venue (left) previously cost less than £3,000 a year, Mr Allcock says his cheapest quote will now see him spend more than £22,000 annually on gas and electricity 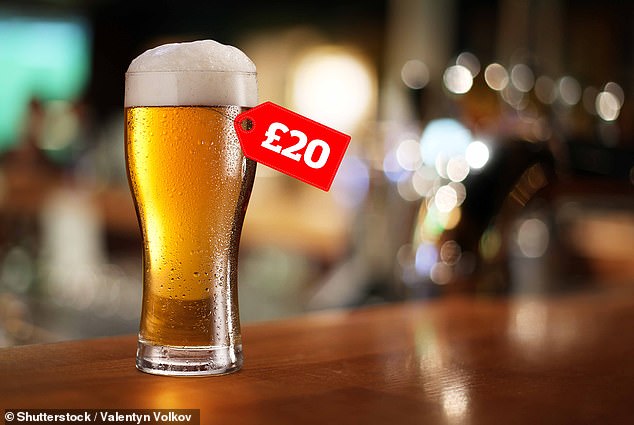 Last week, Mr Allcock shared a screenshot of a new energy bill he could face paying for his tiny business that seats 22.

He wrote online: ‘My current energy bill for my tiny 22 cover restaurant is £2,928 a year. This is my new quote.

‘Unsure what to actually do next but as a business that cost would now be more than I pay in rent and more than I take some months. I simply don’t have the money for this.’

Hospitality venues have also been hit with skyrocketing costs for their fresh produce due to inflation rising at the fastest pace in four decades.

Whilst previously his supply costs would have stabilised over a six month period, Mr Allcock says he now sees them fluctuating far more regularly as he described the price rises as ‘unbelievable’.

He said: ‘One supplier said an 11% price increase, I’ve put some of that on cost additions and I’ve tried to cook creatively and use different products, but I’m the chef and owner of this business, I know what goes into those dishes, I know the quality produce we use.

‘I look at a plate of food sometimes now and I think: “Is it really worth that? Is that really what we have to charge?”‘

The critically-acclaimed Pig & Whistle, which was named The Good Food Guide 2019, is just one of thousands of venues facing a challenging winter without support.

Mr Allcock added: ‘The reality is for a small business like mine, to put the prices up enough to cover that £22,000 energy bill, you’re talking about £3 a guest.

Sacha Lord, founder of Parklife Festival and popular nightclub pop-up The Warehouse Project, told MailOnline that hundreds of thousands of jobs could be at risk as hospitality venues close.

A survey by The Morning Advertiser found 70 per cent of pubs may have to close their doors if there is no government intervention on energy costs.

He pointed out that 271,000 would be a 63% increase on youth unemployment from the latest ONS figures.

‘And those stats are just for pubs,’ he said. ‘Think about how many people who work in jobs linked to the sector will be out of business – van drivers, fruit and veg sellers etcetera – unless intervention is coming. This could have been avoided.’

He welcomed the ‘positive noises’ from Tory leadership frontrunner Liz Truss around cutting VAT, but said ‘we are not hearing anything about energy.’ 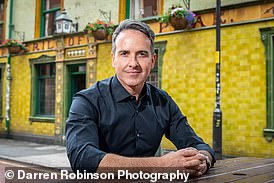 Sacha Lord, Nighttime Economy Advisor for Greater Manchester, said that hundreds of thousands of jobs could be at risk as hospitality venues close

As Manchester’s nighttime economy tsar, Mr Lord said he is often approached by those working in the sector who are struggling.

But, he said, he recently had to switch his Twitter DMs off because he could not cope with the barrage of messages from desperate landlords he was receiving.

‘I am not a mental health specialist,’ he said. ‘There was one man I had to refer to Samaritans.

‘He has a pub down south and I had a phone call from him and he was in tears. He has been in the industry all his life.

‘He had pressured his wife to remortgage their house to support the business and now he’s making a loss. His wife has left him and his kids won’t speak to him.’

When asked if he sees an end to the crisis affecting the sector, Mr Lord said he expects it to carry on ‘for at least two more years’ and called for ‘immediate action’ from the government.

A CAMRA survey from this summer revealed more than 50% of the British public think that the cost of a pint is already unaffordable, meaning customers would be put off by a £15 or £20 pint.

‘What you can say with surety is you can’t possibly pass on these energy increases and you can’t increase the pint by 500%,’ he told the Daily Star.

‘It just isn’t viable for pubs to pass [price hikes this big] on to consumers because people wouldn’t come drink at pubs anyway.’

Mr Stainer added: ‘So thousands could be affected by this. And they can close – and the difference with [pubs compared to] other sorts of businesses is once a pub closes it very rarely comes back.’

He called on the Government to take action and support the hospitality industry by reviewing energy costs, business rates and beer tax.

Nik Antona, Chairman of the Campaign for Real Ale (CAMRA) added: ‘Pubgoers and beer drinkers want to see urgent action from government to make sure that the UK’s best beers, brands and breweries can survive these unprecedented times of rocketing energy and ingredient costs and a dip in consumer confidence.

‘With businesses having pulled out all the stops to make it through the pandemic, it would be a travesty if more of our local, small and independent breweries were forced to close for good now due to the crisis with the cost of energy, goods, and doing business.’

His warning follows craft brewer BrewDog’s announcement it will close six pubs over its rocketing energy bills as it criticised the Government for being ‘clueless’.

Last week MailOnline revealed how pubs were planning to call last orders at 9pm, serving food for just three hours a day and closing their beer gardens in a bid to avoid financial ruin.

Landlords are reporting 400% increases in the price of their bills, costs they are largely unable to cut as they rely on constant gas and electricity supplies to serve customers.

And Michelin-starred celebrity chef and pub owner Tom Kerridge warned the annual energy bill at one of his pubs is set to rise from £60,000 to a ‘ludicrous’ £420,000.

The sharp increase in energy costs means pubs are facing a tough choice between passing the extra burden onto loyal customers, who are also struggling with the rising cost-of-living, cutting menus and even staff, or shutting shop completely.

The lack of a price cap on energy rates is only the latest crisis facing the ailing hospitality sector, with many landlords and restaurateurs tracing their woes back to the pandemic.

They are also continuing to work through a staffing crisis, with chefs and waiting staff leaving the sector in droves for more stable jobs and restaurateurs saying they have had to raise wages to keep their teams.

Publicans have told MailOnline that they are now only staying in the industry either for the love of it or because they have no choice, as they are no longer turning a profit.

Bosses of six of the UK’s biggest pub and brewing companies, including Greene King, Carlsberg Marston’s and Drake & Morgan, also signed an open letter to the Government, urging it to act to avoid ‘real and serious irreversible’ damage to the sector.

It comes as Britain’s oldest pub that has been serving customers for more than 1,200 years is ‘fighting for survival’ as the cost of living crisis threatens to cripple businesses around the country.

Ye Olde Fighting Cocks in St Albans, Hertfordshire, claims to have been in business since the year 793AD – before England was united under one monarch.

Now, despite surviving the English Civil War, 17 recessions, two World Wars and five pandemics, including the Black Death and Covid, the historic boozer is facing ruin due to spiralling energy costs.

The historic pub was forced to enter administration in February due to the financial impact of Covid and was bought over by new owners. 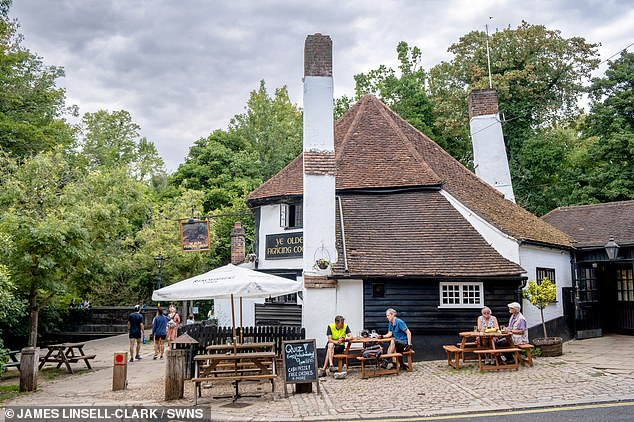 Britain’s oldest pub, Ye Olde Fighting Cocks in St Albans, Hertfordshire, is ‘fighting for survival’ as the cost of living crisis threatens to cripple businesses around the country 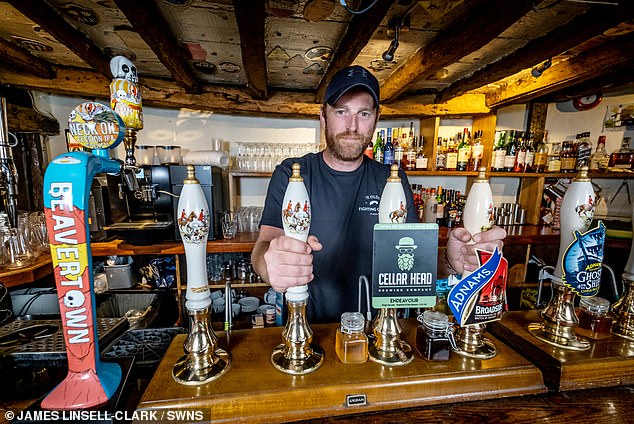 The alehouse is again struggling as it faces the combined blows of the cost of living and energy price crises, made worse since rocketing gas prices around the world – which increased further after Russia’s invasion of Ukraine earlier this year.

‘It’s not like at home where you can turn everything off but the fridge and freezer, we’ve got certain things that need to stay on for health and safety and general upkeep.

‘And our light bill is 10 times more than what it is in a house because at home you can turn off all the lights except the one you’re in. But you can’t do that in a pub.

‘So we don’t have a choice, we can’t really cut down on energy bills but we are being charged double the amount.’

Now with winter on its way, Mr Gaffney warned pubs will see extra costs, and for many, less customers.

He added: ‘Winter for a lot of pubs, like my own, is the quiet season.

‘If pubs don’t have an infrastructure or financial backing then I can imagine that a lot of them will struggle.’