Singapore: The Australian government is working with Qantas to organise a flight for expats stranded in Indonesia, with nearly 800 registered as wanting to return home from a country that is now the global epicentre of the virus.

The halving of the quarantine cap in Australia and a major reduction in commercial flights by cash-strapped airline Garuda Indonesia has left seats on the remaining weekly Jakarta to Sydney service booked out for the rest of the year and led prices for one-way ticket to soar beyond $12,000. 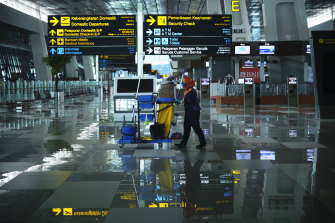 Soekarno-Hatta International Airport in Jakarta has been far less busy during the pandemic.Credit:Getty Images

As Singapore is blocking passengers from Indonesia from transiting through the city state because of the severity of the Delta outbreak in the archipelago, Australians wanting to return have been forced to consider expensive charter flights and even the extreme option of coming back by boat.

A spokesperson for Australia’s Department of Foreign Affairs and Trade said on Wednesday it was “looking at all available options to assist vulnerable Australians in Indonesia to return”.

“We are working with Qantas on an option for a facilitated commercial flight for vulnerable Australians departing from Indonesia,” the spokesperson said.

“Around 780 Australians (including citizens and permanent residents) in Indonesia are currently registered with the Department of Foreign Affairs and Trade as wanting to return and approximately 350 of these are considered vulnerable. The number of Australians registered changes frequently according to people’s circumstances.” 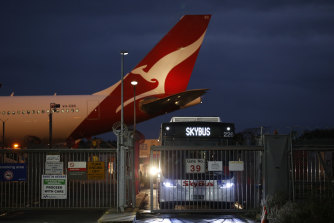 Qantas is expected to fly home some vulnerable Australians from Indonesia.Credit:Getty Images

Rebecca Meckelburg, an Australian academic in Salatiga, Central Java province, who is being treated for tuberculosis, had tickets booked for herself and her family to return in April 2020. However, after they were cancelled she has been unable to secure any more because of restricted numbers and the prohibitive prices on top of the cost of quarantining in Australia.

She said her treatment for tuberculosis hadn’t been successful and she needs further diagnostic tests which are not available in Central Java but was eager to get home for other reasons too.

“We are a two citizenship family – Indonesian and Australian – the stress of not being able to get to Australia [and] having older parents – one who needs a lot of health and mental support and we can’t give that – it is heartbreaking,” she said.

In Bali, Shannon Boulton said he was sharing a room with others at Kuta Beach at Bali after his business, Bali Wheelchair Travel and Tours, collapsed as a result of the pandemic and he had a seat on a flight to Sydney this month cancelled.

Shoppers at a fried food stall at Karangayu Market in Semarang, Central Java.Credit:Bloomberg

“I’m depressed, I’m anxious, I want to get home. I’ve had to sell everything and run out of money and my mum is not well at the moment so she needs me home,” he said.

He now has a flight booked for October 19 that he hopes won’t fall over.

As the Delta variant has taken hold in Indonesia, 16,790 foreigners have flown out of Jakarta’s international airport between July 1 and July 23 including 243 Australians, according to the airport’s immigration office chief Sam Fernando. Only 8856 people from overseas have landed in Jakarta in that period including 211 Australians, although arrivals have been limited by incoming travel restrictions.

Despite the exodus, expats remain in high numbers, particularly on Bali, where of the 109,800 foreigners still living on the holiday island, Australians are outnumbered only by Russians.

Vaccination on Bali was prioritised by Indonesia President Joko Widodo in an effort to re-start international tourism. But those plans have been delayed as the province records more than 1000 new infections per day and has endured 2000 total deaths because of the virus, two of whom, the ABC reported, were Australian.

Across Indonesia, where there were a record 2069 deaths on Tuesday, taking the overall death toll to 86,835. The foreign ministry said 57 foreigners had lost their lives to COVID and 4014 had been infected there during the pandemic.

One Australian who caught the virus was Bali-based business consultant Martin Lenihan. The 59-year-old from Melbourne said he had trouble breathing and was sick for 12 days despite having just had a second dose of the AstraZeneca vaccine, but recovered at his home and praised medical staff on the island for excellent consultation and treatment.

Beyond Bali, access to the vaccine has been another problem for Australians in Indonesia, where only 7 per cent of the population of 270 million people have had two doses. Foreigners are only eligible for the Indonesian government rollout at the moment if they are either over 60, part of the diplomatic community, work for an international non-profit organisation or if they are teachers. Employees with companies in Indonesia are, however, being vaccinated through private jab schemes.

The Australian government has vaccinated staff at its embassy in Jakarta, its largest in the world, with AstraZeneca and has said there are no plans to withdraw personnel as it did during the first wave last year.

The government’s vaccine policy “does not include rollout for Australian citizens overseas”, the spokesperson said.

The government has facilitated 154 flights on which more than 23,000 Australians have returned home during the pandemic, it said.

– with Karuni Rompies and Amilia Rosa