Queen is likely to mark Easter Sunday at small chapel within Windsor Castle as she is forced to miss traditional service attended by Charles, Camilla, William and Kate because of mobility issues

The Queen is likely to mark Easter Sunday at a small chapel within Windsor Castle as she is forced to miss the traditional service.

Charles, Camilla, William and Kate are expected to attend the service at 10.45am but the Queen will not be present, while Prince Harry and Meghan Markle are in the Netherlands for the Invictus Games.

The Queen’s absence would come after a palace source told The Mail on Sunday that the public must start assuming she will not attend public events.

Royal biographer Angela Levin said the Royal Family was being ‘cautious’ with the Queen’s health ahead of the Jubilee in June.

She told Sky News: ‘I don’t know how difficult it is to get in and out of the Chapel at Windsor Palace but she does have her own very small chapel within Windsor Castle and I suspect she will go there.

‘I can’t imagine that she will miss saying her prayers and feeling that it actually is Easter Sunday. I think that’s what she’s going to do but I think it’s more of a worry that it’s now been announced that we won’t know if she’s going to attend anything until on the day so that shows how much her health goes up and down.’

In recent months, Buckingham Palace has been forced to make several last-minute announcements that the Queen has ‘regretfully’ pulled out of engagements due to mobility issues.

Under a new strategy, aides will now confirm her attendance only on the day of an event.

‘The assumption must now be that the Queen will not be present at events,’ a source told The Mail on Sunday. ‘If Her Majesty does attend, it will be decided on the day and she will be accompanied by another member of the Royal Family.’

Prince Harry and Meghan Markle will also not be attending Sunday’s traditional Easter Sunday service as they spend the day cheering on athletes competing in the Invictus Games in The Hague. 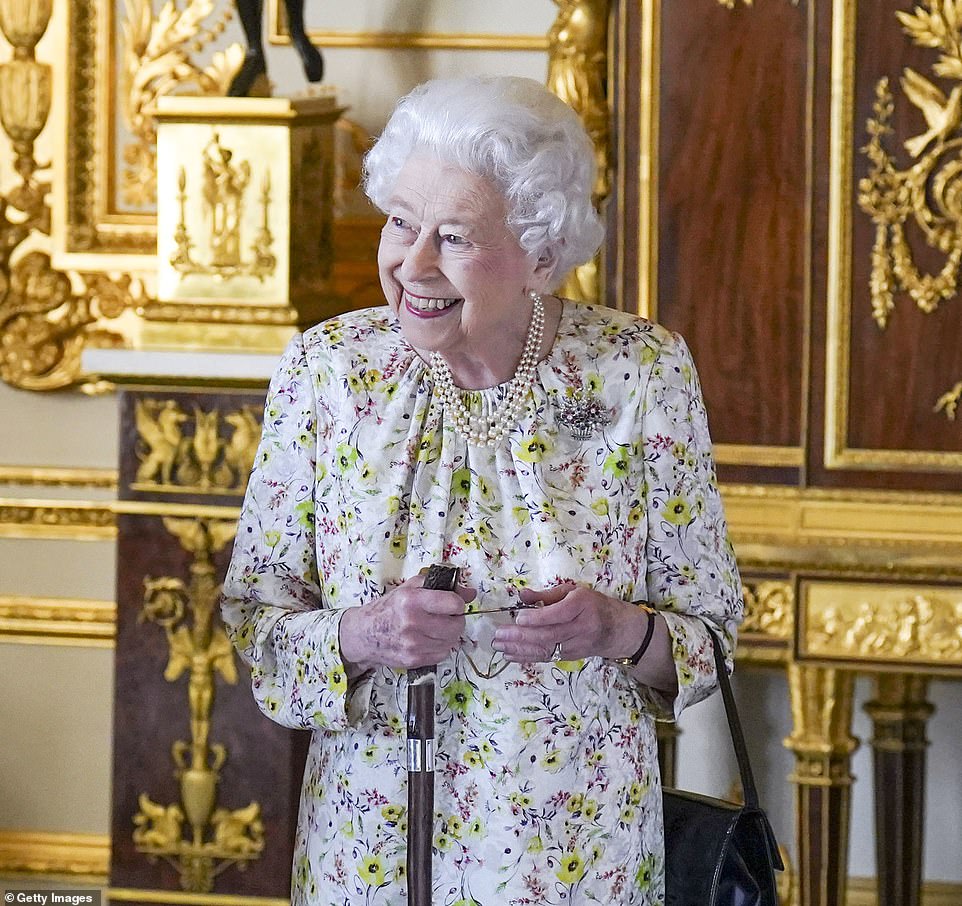 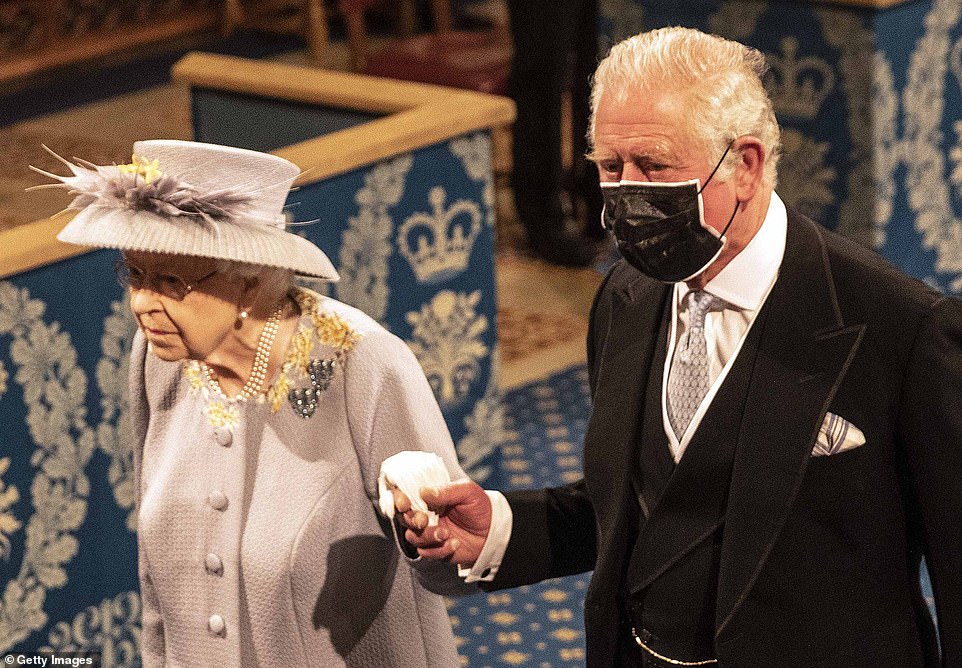 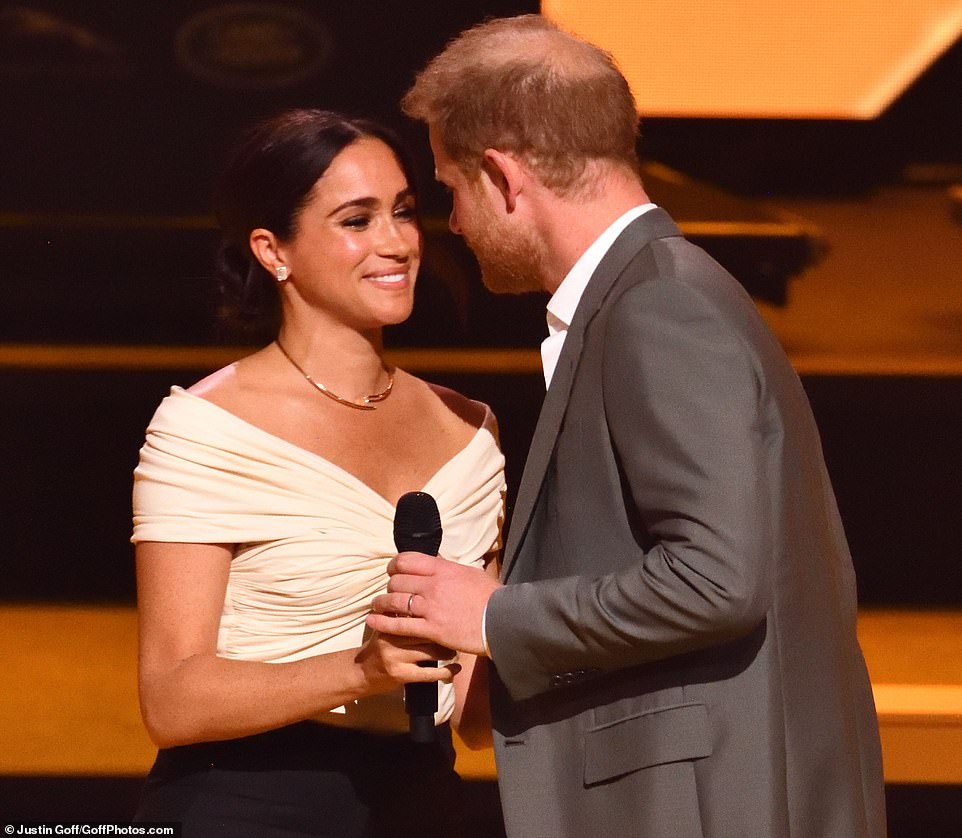 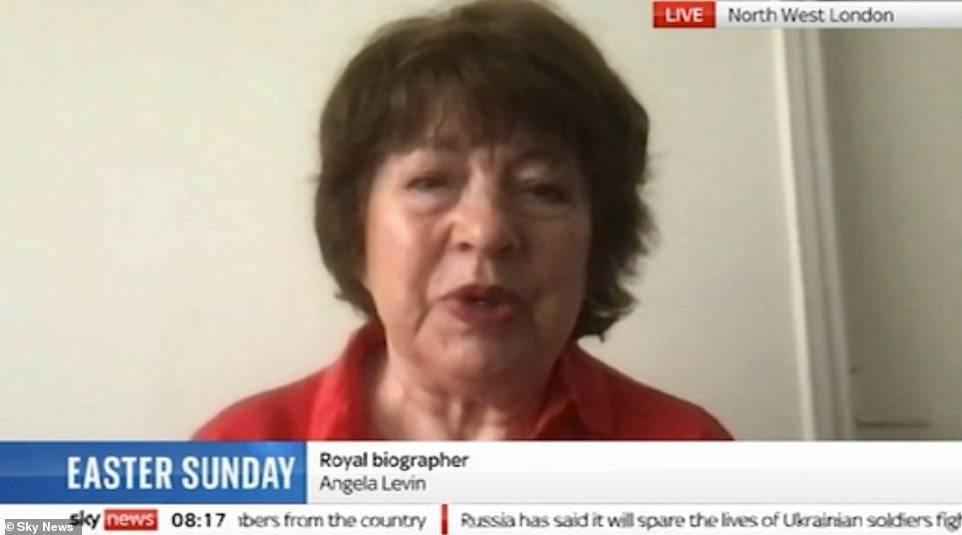 Harry, who is writing a memoir scheduled for publication later this year, greeted Prince Charles with a kiss at Windsor on Thursday, but insiders described the meeting as ‘frosty’. They had been scheduled to meet at 10am, but Charles was left waiting when Harry and Meghan were delayed.

It meant father and son had only 15 minutes together before Charles had to leave to prepare for the Maundy Thursday Service at nearby St George’s Chapel. The Duchess of Cornwall was left holding the fort.

A source told The Mail on Sunday that Camilla had not initially been keen to take part, considering it best for father and son to have time together, but when it became clear that Meghan would be joining the meeting, she agreed to attend. Harry and Meghan also met briefly with the Queen.

Angela Levin added: ‘They [Harry and Meghan] arrived late for their meeting with Prince Charles so they had a brief ten minutes but the Duchess of Cornwall was there so that there was no disagreement about who said what. And Prince Charles and her had to go off to the Maundy celebrations and so they weren’t there for very long.

‘He [Harry] couldn’t have been there for the Queen for very long either because she had a virtual engagement.

‘I think they were completely using her to add to their documentary with Netflix. You can’t just – when you haven’t seen an elderly person who is obviously not well and suffering very much from losing her husband – you can’t expect one, two, three, bang, you know everything’s fine again.

Thursday’s meeting was the first time Charles and Camilla had come face-to-face with the Duchess of Sussex since she accused an unnamed senior member of the Royal Family of racism during her interview with Oprah Winfrey.

In response to that allegation and others in the programme, the Queen issued a statement in which she said that ‘recollections may vary’.

Meanwhile, friends of Prince Charles fear Harry and Meghan’s plans to return to Britain with their children for the Platinum Jubilee weekend could overshadow the commemoration of the Queen’s 70-year reign.

Their daughter Lilibet, named after the Queen’s childhood nickname, has never met her extended family in Britain, and their son Archie, who is three next month, has not been to the UK since November 2019.

The Queen is said to be hoping the Sussexes will return to the UK with their children, but a source close to Charles said there were concerns that a visit coinciding with the Jubilee weekend in early June – when Lilibet will turn one – will distract attention from his mother’s milestone, by creating a ‘circus’.

The Sun reported on Saturday that there are fears amongst the Royal Family that Netflix could seek permission to film the Sussexes at the Queen’s celebrations, although other insiders have reported they have always promised to ‘uphold the values of her Majesty’ in their new detached role from Buckingham Palace.

A crew has joined Harry and Meghan at the Invictus games as part of filming for a Netflix documentary called Heart Of Invictus – a series from Archewell Productions following people who are competing at the event.

The series is reportedly part of a £113million deal that the couple has with Netflix.

Speaking at the Opening Ceremony for the Games in The Hague, the Duchess of Sussex made a subtle dig at the royal family when she said: ‘Thank you so much for your service and thank you to all the family and friends that are here who have been supporting you along the way. Because this is service, this is dedication and this is the In­victus family.’

When Meghan and Harry stepped back from royal life, the Queen said the pair would not ‘continue with the responsibilities and duties that come with a life of public service’.

In a terse response, Harry and Meghan said at the time: ‘We can all live a life of service. Service is ­universal.’

The term clearly struck a chord as the Duchess made reference to the duty of the injured veterans as the couple put on a loved-up display and kissed in front of the crowds and the Netflix cameras following them in the Netherlands.

During her record-breaking 70-year reign, the Queen’s attendance at most engagements has been planned for months and often announced publicly weeks in advance.

But the presence of the Monarch – who marks her 96th birthday on Thursday – will now be a bonus, rather than guaranteed. The decision means an even greater role for Prince Charles, under whose leadership – in large part – the Monarchy is effectively continuing. 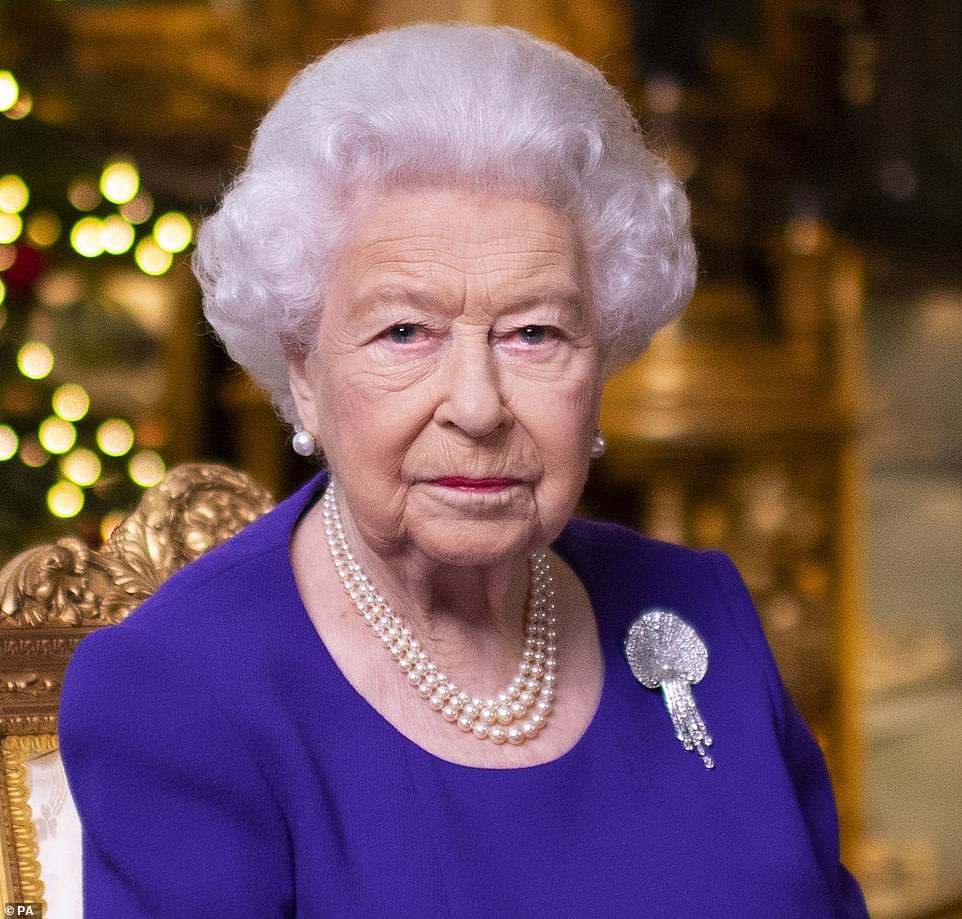 In recent months, Buckingham Palace has been forced to make several last-minute announcements that the Queen has ‘regretfully’ pulled out of engagements due to mobility issues 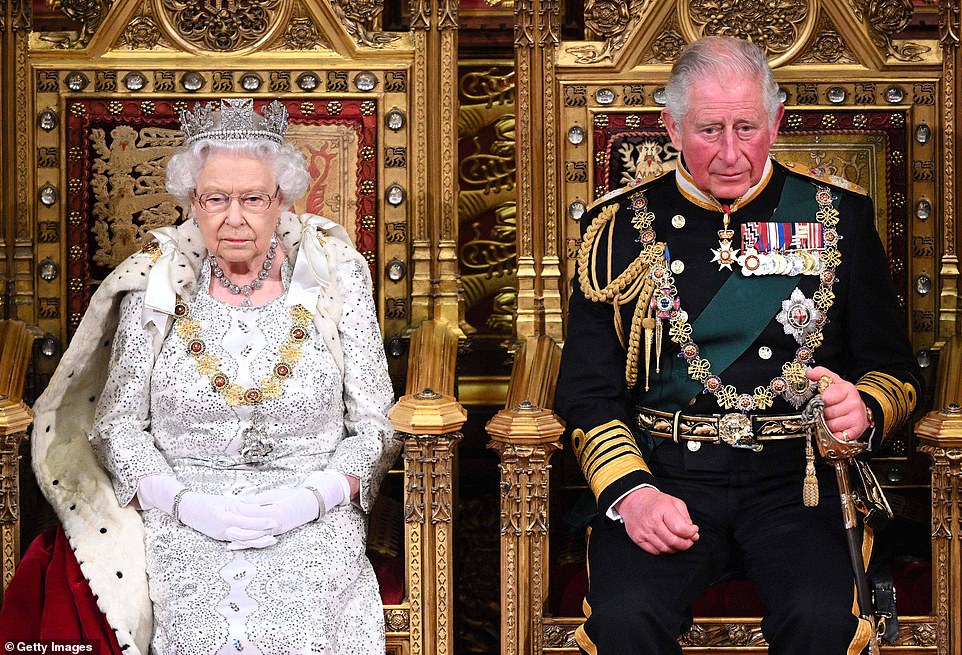 Prince Charles’ aides are said to be concerned that his son and daughter-in-law will create a ‘circus’ by coming to the UK with their young children – Archie and Lilibet – and thus overshadow the Queen’s Platinum Jubilee celebrations. Pictured: Queen Elizabeth II and Prince Charles, Prince of Wales during the State Opening of Parliament at the Palace of Westminster on October 14, 2019 (file photo)

Prince Harry and Meghan Markle, Duke and Duchess of Sussex, kiss during the opening ceremony of the Invictus Games 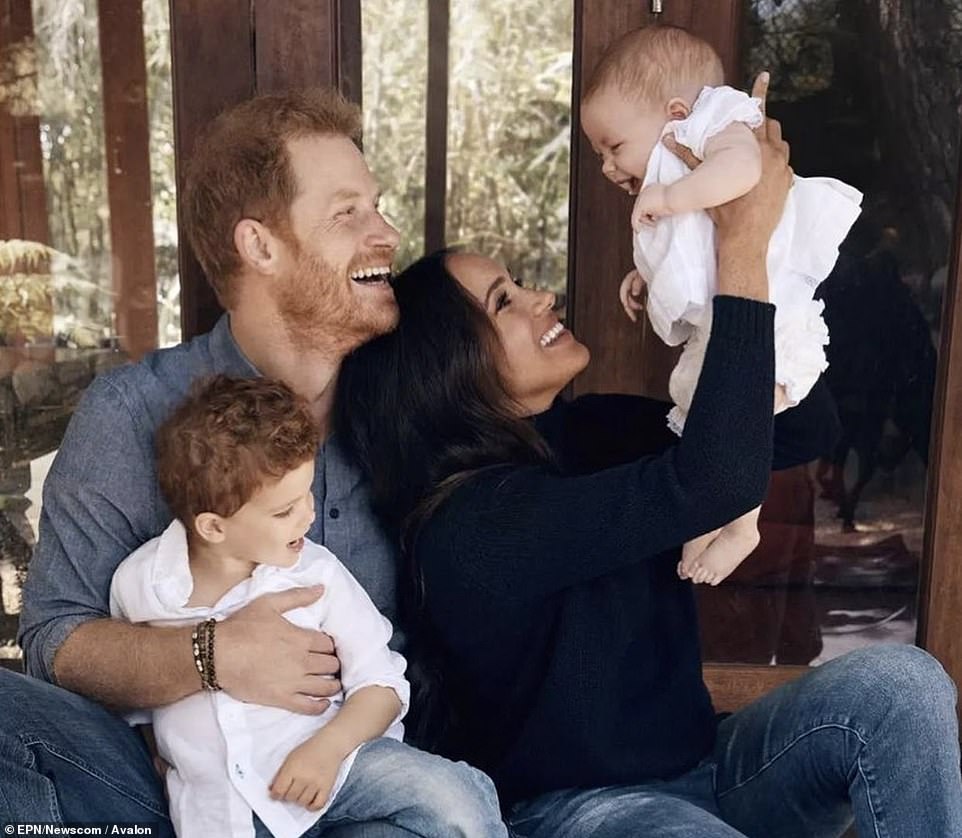 The Queen is yet to meet her great-granddaughter, 11-month-old Lilibet, who was named after Her Majesty’s childhood nickname. Archie – seventh in line to the British throne – is now two years old, and reports have previously hinted at the Queen’s sadness at not having the chance to spend more time with him

On Thursday, Charles stood in for the Queen when she missed the Maundy Service for the first time in 52 years. While the Queen is not suffering from a new illness and has appeared well during virtual engagements, continuing mobility problems meant she could not attend the ceremony at St George’s Chapel near her apartments at Windsor Castle.

Her most recent public appearance came on March 29 at the thanksgiving service for her late husband, the Duke of Edinburgh, at Westminster Abbey.

But over the past six months she has withdrawn from several other events historically central to her diary, including the Remembrance Sunday service at the Cenotaph and the annual Commonwealth Service.

Aides are hopeful the Queen will be able to attend some of the events organised to mark her 70th jubilee in person, although it is expected these will be few in number.

Angela Levin said leaving decisions on the Queen’s attendance to the day of events would be a ‘tremendous burden’ on Prince Charles ‘who is already working incredibly hard’.

‘He has got all his own engagements to do but must be there to take over if the Queen needs him, but he won’t know if that’s on or off,’ she added. ‘I think it’s alright now with an Easter holiday and things like that, but I can’t see that that’s the long term decision.’

She said the virtual engagements the Queen carried out during the Covid pandemic are fine and work well but in the long term the public would want to see her ‘not just at a computer talking remotely’.