Queenslanders will be banned from leaving the state for a short business trip or weekend holiday until the state reaches 90 per cent fully vaccinated next year.

Under the state’s roadmap, at the 80 per cent double-dose milestone people will be allowed to enter Queensland from interstate hotspots, as long as they return a negative PCR test 72 hours beforehand.

Those rules were due to come into effect on December 17 or at an 80 per cent vaccination target, which could be reached as early as December 6 to 12, according to recent predictions.

On Tuesday, Premier Annastacia Palaszczuk was asked whether someone would be allowed to get a negative COVID test in Queensland, travel to COVID hotspots in NSW or Victoria for fewer than 72 hours, and then return to the state with the same negative result.

But she confirmed the loophole would be slammed shut.

“You do need to have a PCR test, so at the moment, going to Sydney for a day or two would be out of the question until we get to that 90 per cent double-dose,” she said, speaking from the Gold Coast. 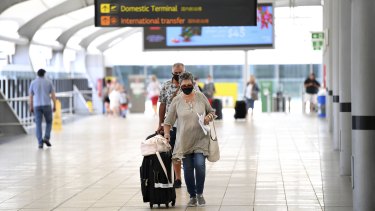 Queensland Premier Annastacia Palaszczuk says people will not be allowed to leave the state for day trips until the 90 per cent vaccination milestone is hit.Credit:Dan Peled

Acting Chief Health Officer Peter Aitken previously predicted Queensland would hit 90 per cent – which would trigger no restrictions on entry to the state – in “early January”.

That means people who want to leave Queensland will have to stay out of the state for at least three days.

People will have to pay up to $150 each – or $600 for a family of four – for the “gold standard” PCR COVID tests at a private pathology clinic when Queensland’s borders open to hotspots next month, when no quarantine period will be required for fully vaccinated travellers.

Current hotspots include the entire states of NSW and Victoria, the ACT and the Northern Territory.

It could now be too late for people to be jabbed in time to enter Queensland immediately when the rules come into effect, which could be as early as December 6, as those travellers will not be considered “fully vaccinated” until two weeks after receiving their second dose.

Medicare covers the cost if a person has COVID-19 symptoms, but the federal government will not subsidise the tests for asymptomatic travellers, despite calls from the Queensland government.

Queensland Health Minister Yvette D’Ath has hit back at a letter from federal Health Minister Greg Hunt, in which he criticised the state government for not giving “sufficient regard” to rapid antigen testing, which costs about $30.

Ms Palaszczuk said the issue of PCR test funding would be added to the agenda at national cabinet.

“Greg Hunt can quite easily make it a Medicare rebate – he can do that with a stroke of a pen,” she said.

“This is a temporary measure up until we get to that 90 per cent double dose,” she said.

Ms Palaszczuk said PCR tests would be mandated at the 80 per cent target as they were more reliable than rapid antigen tests.

“If someone came in without a PCR test, and had the virus, it would spread like wildfire through the unvaccinated population of Queensland,” she said.

“I don’t want to see the people of Queensland get COVID for Christmas.

Asked if people would be able to print out evidence of their negative PCR test results to show at the border, Ms Palaszczuk replied: “Yeah, we’re looking at that, to have the text message, yeah, that’d be fine.”

In Queensland, 84.60 per cent of people aged 16 and older have received one dose of a COVID vaccine, while 73.42 per cent are double-dosed.