Washington: Kevin McCarthy woke up on Sunday morning with a long-held dream fulfilled: After a four-day standoff, he was elected speaker of the US House of Representatives, becoming the most powerful member of the Republican Party.

But that role could turn into a nightmare because it requires leading a caucus that strongly rejects leadership. Conservatives have regularly excoriated top Senate Republican Mitch McConnell for agreeing to compromises of any kind with Democrats and earlier this week rejected former President Donald Trump’s call to quickly fall in line behind McCarthy. 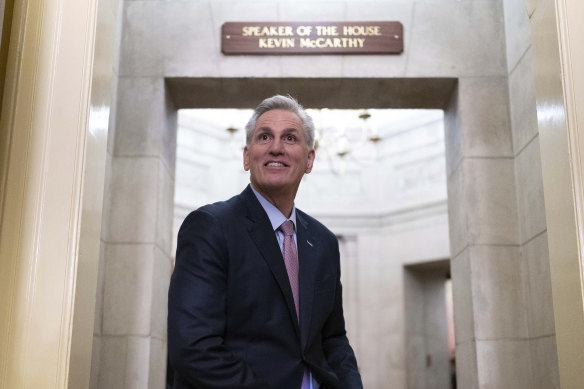 House Speaker Kevin McCarthy of Calif., stands by the newly installed nameplate at his office after he was sworn in as speaker of the 118th Congress.Credit:AP

The 57-year-old Californian showed tenacity in pushing through 15 rounds of voting and dismantling what had been a cadre of 20 right-wing hardline opponents, finding compromises that would pull most of them into his camp. He told reporters the previous night that he would be a more effective leader because of the drawn-out process.

“Because it took this long, now we’ve learned how to govern. So now we’ll be able to get the job done,” McCarthy said. “At the end of the day, we’re going to be more effective, more efficient and definitely government is going to be more accountable.”

McCarthy agreed to major concessions to secure a role that is second in line to the Oval Office behind Democratic Vice President Kamala Harris, including a rule that means that any of the 435 members of the House could force a vote for his removal at any time.

Republicans’ weaker-than-expected performance in the November elections left them with a narrow 222-212 majority and gives outsized power to a small group of right-wing hardliners. They railed against McCarthy, who served as minority leader since 2019, accusing him of being soft and too open to compromise with President Joe Biden and his Democrats, who also control the US Senate. 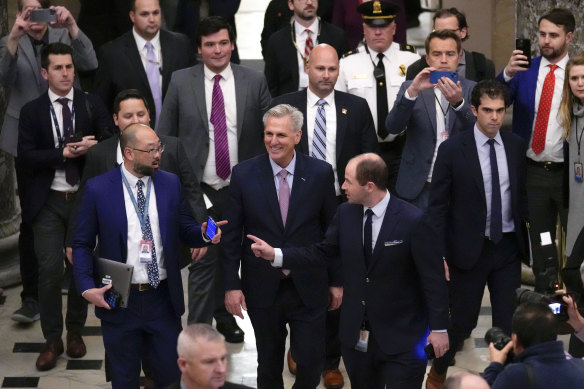 Kevin McCarthy walks to his office from the chamber after a contentious battle to lead the GOP majority in the 118th Congress.Credit:AP

“We do not trust Mr McCarthy with power, because we know who he will use it for. And we are concerned that it will not be for the American people,” said Representative Matt Gaetz, who dealt McCarthy one final humiliation on Friday night when he cost him the second-to-last vote by withholding his support.

But compromise will be necessary in a divided government, and McCarthy’s concessions raise the risk that the two parties could fail to reach a deal when the federal government comes up against its $US31.4 trillion ($46 trillion) debt limit later this year. Failure to reach agreement, or even a long standoff, could bring a default that would shake the global economy.

McCarthy shrugged off suggestions that the deal could weaken his power.

“That gives me no problem or concern whatsoever,” McCarthy told reporters, describing his deal with critics as a “very good” agreement that “empowers the members.”

He also agreed to pursue deep cuts in government spending to achieve a balanced federal budget in 10 years, beginning in October, and promised his hardline critics greater influence on key committees.

The week-long stalemate over his candidacy has emboldened individual lawmakers, at a time when the thin Republican majority affords him the loss of no more than four votes to enact legislation.

McCarthy has spent his adult life in politics, first as a congressional staffer and then state legislator before being elected to the House in 2006. He made an unsuccessful run for speaker once before, in 2015, and the election represents the pinnacle of his career.

But the speaker’s post has proved to be a formidable challenge for Republicans in recent years, with John Boehner resigning from the position in 2015 after a struggle with rebellious conservatives.

Boehner’s successor, Paul Ryan, a frequent target for conservatives, decided not to seek reelection in 2018 as then-President Trump shifted the party focus from Ryan’s fiscal priorities to immigration and culture-war issues.

McCarthy ran afoul of hardliners when he publicly acknowledged that Trump bore responsibility for the deadly January 6, 2021, attack on the US Capitol, days after the violence. He later repeatedly voiced allegiance to the former president.

On Saturday, Trump sought credit for the new speaker’s election, posting video on his Truth Social network of McCarthy thanking Trump for his support, captioning it: “Thank you Kevin. It was my great honour.”

McCarthy visited at least 34 states to campaign for more than 165 candidates ahead of the midterms. The Congressional Leadership Fund, a group tied to him, contributed more than $US160 million to help Republican House candidates. McCarthy sent candidates $US6.5 million from his own campaign and four other entities under his control, according to his campaign team.

But to reach the speakership, he also agreed not to interfere in future Republican primaries, even if it meant boosting candidates that he thought were likelier to win a general election than right-wing rivals.

“Kevin is a good man. He’s a man of God,” Republican Representative Mike Garcia said in a speech nominating McCarthy. “He’s a patriot. He’s a leader who has led this conference to our current majority over the last four years. Those things are unassailable.”