Rod Stewart, 76, and his son, 41, plead guilty to battery and will AVOID jail time after scuffle with security guard at exclusive Florida hotel on New Year’s Eve in 2019

Rock legend Rod Stewart and his son have pleaded guilty to battery and will be spared jail time in an assault case stemming from a New Year’s Eve 2019 tussle with a security guard at an exclusive Florida hotel.

‘No one was injured in the incident and a jury did not find Sir Rod Stewart guilty of the accusation,’ his attorney Guy Fronstin said in a statement. ‘Instead, Sir Rod Stewart decided to enter a plea to avoid the inconvenience and unnecessary burden on the court and the public that a high profile proceeding would cause.’

The father and son previously faced up to a year in jail over the fisticuffs. 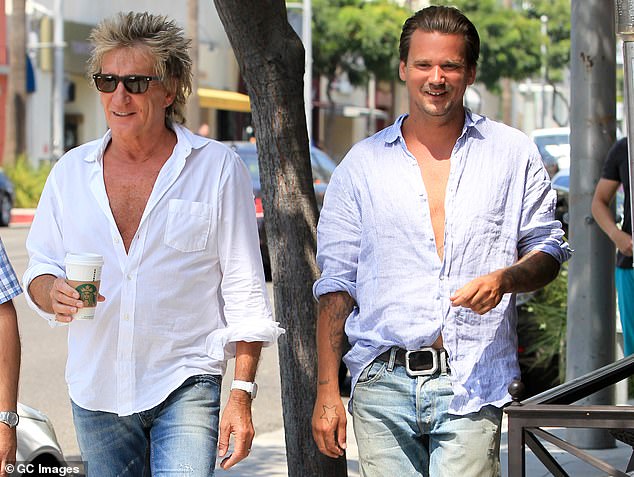 Rod Stewart and his son Sean (pictured together in Los Angeles in 2015) have pleaded guilty to battery charges stemming from a brawl at the high-end Breakers Hotel in Palm Beach, Florida, two years ago

The raspy-voiced Stewart, 76, is a British member of the Rock & Roll Hall of Fame and was knighted by Queen Elizabeth II in 2016.

The plea agreement, dated and signed Monday, means that Stewart and his son, 41, won’t have to appear in court and formal adjudication of the charge was withheld. There will be no trial.

Neither will do any jail time or be required to pay fines and won’t be placed on probation, Fronstin said.

The Stewarts were accused of a physical altercation with security guard Jessie Dixon at the luxury Breakers Hotel in Palm Beach on December 31, 2019.

The dispute involved Dixon’s refusal to allow them into a private New Year’s Eve party at the hotel.

Dixon said in court papers that Rod Stewart punched him in the rib cage with a closed fist and that Sean Stewart shoved him.

A spokesperson for Palm Beach State Attorney Dave Aronberg, whose office prosecuted the case, said in an email that Dixon agreed with the outcome of the case.

The footage shows the incident occurred seconds after the singer of Stay With Me and Tonight’s The Night mocked the security guard who prevented access to the Stewart clan, including wife Penny Lancaster along with their two boys, 15-year-old Alastair and Aiden, 9, to an outdoor playground.

Stewart even performed what appeared to be a Hitler salute with his right arm extended above his head while fingers of his left hand made a Hitler-style moustache.

The father and son were arrested and briefly jailed.