Washington: Russian forces have fully withdrawn from the Ukrainian capital, Kyiv, and the city of Chernihiv to its north, the Pentagon said, as Moscow prepares to concentrate its invading forces in the eastern part of the country.

“We are assessing that all of the Russians have left,” said a senior US defence official, speaking on the condition of anonymity, on Wednesday, Washington time. 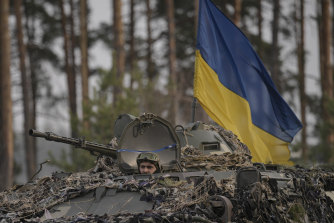 Ukrainian servicemen ride on an armored transporter driving through a Russian position overran by Ukrainian forces outside Kyiv.Credit:AP

Their full departure was confirmed only in the last 24 hours, this person said, cautioning that Russian forces may have left mines in their wake that would still need to be cleared.

US and European intelligence officials have been tracking for days that Russia is in the midst of reorienting after encountering fierce resistance – and suffering thousands of casualties – in northern Ukraine. Moscow enjoys greater support in the east, where Ukrainian forces and Russian-backed separatists have been locked in a grinding conflict for many years.

But while Russia’s withdrawal from Ukraine’s capital region appears to be complete, with many units retreating through Belarus, the Pentagon has yet to see those personnel reenter eastern Ukraine, the senior defence official said.

The United States announced on Tuesday night the approval of an additional $US100 million in military assistance for Ukraine, a move made in part to ensure Ukrainian forces will have the weapons they need to fight for the Donbas region, the official said. 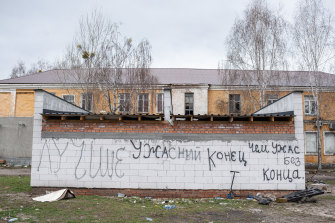 The writing on a garage says, “A horrific end is better than horror without end” in Hostomel, Ukraine. Credit:Getty

Kirby said that earlier this week the United States also sent Ukraine 100 Switchblade drones, which can be loaded with explosives and flown into enemy targets, and that a “very small number” of Ukrainian soldiers receiving military education in the United States since the fall had been taught how to use them.

The Switchblade – what some analysts have termed a “kamikaze” drone – is not a complex system, Kirby said, noting that personnel could be trained how to use them in about two days.

On average, it is taking the United States about four days to ship weapons to pass-off points outside Ukraine, and another day or two for those shipments to enter the country, Kirby said, adding that such transfers have “never been done that fast before”. 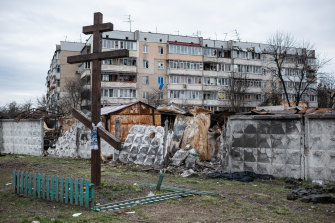 Damaged fence is seen behind a cross in Hostomel, Ukraine, near Kyiv. Hostomel was occupied for more than a month by Russian forces as they pushed toward the Ukrainian capital, before ultimately retreating to Belarus last week.Credit:Getty

Kirby expressed some confidence Wednesday that Ukraine “can win this,” arguing that Russian President Vladimir Putin has achieved “exactly zero” of his strategic objectives thus far. But the Pentagon continues to caution that even though the war’s epicentre appears to be shifting, serious threats remain.

There are more than 30 Russian battalion tactical groups operating in the Donbas region, according to Pentagon estimates.

Earlier this week, national security adviser Jake Sullivan predicted that if Russia could successfully regroup in the Donbas region, it may seek to push out from there into other parts of Ukraine.

“It’s not like Kyiv is somehow immune from further attack,” the senior US defence official said on Wednesday.

More than 80 of the approximately 130 battalion tactical groups that Russia deployed into Ukraine continue to operate in the country, this official added, estimating that such groups each contain 800 to 1000 troops.