Istanbul: Russian pilots have been told not to brake too much in order to reduce wear and tear, as Western sanctions mean there is a shortage of parts for plane repairs.

According to internal memos from four Russian airline companies, pilots have been asked to be gentle when braking and taxiing. S7 Airlines has told pilots to use engine reverse thrust and to avoid autobrake mode if the runaway is long enough, the Aviatorshina Telegram channel reported. 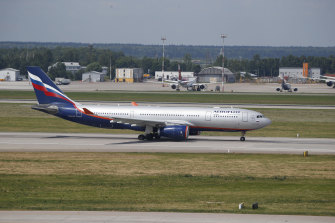 Aeroflot Airbus A330 plane taxies out at Sheremetyevo airport, Moscow.Credit:AP

Russian airline companies are grappling with a shortage of spare parts as international companies refuse to sell to them because of sanctions put in place after the invasion of Ukraine.

Pilots were also told they should get off the runaway quickly to make way for other planes.

Traffic control were given separate instructions to offer aircraft longer slots for landing to give planes more time to taxi off the runway.

Aeroflot did not issue similar memos in writing but Aviatorshina, an aviation media outlet in Russia, quoted an Aeroflot pilot saying they had been told to spare brakes as well.

According to estimates in the Russia media, by the end of summer, domestic airline companies will have no choice but to pull apart some jets to get spare parts for other aircraft.

Yuri Borisov, the deputy Russian prime minister in charge of civil aviation, told a conference earlier this year that the existing number of foreign-made jets will last for about five years without repair parts before the fleet is depleted.

A vice-president of Russia’s aircrew trade union said the advisory guidance “does not compromise safety in any way”.

Oleg Prikhodko added: “If the runway is long, you may as well not use brakes at all.

“The plane is going to stop at the end of the runway due to air brakes, reverse thrust of the engine and other things. It’s about a rational use of resources.”