Swimmers are being urged to avoid some of Sydney’s most popular beaches for the rest of the week as swimming spots across the city remain brown and dirty as a result of the floods.

Tamarama, Bronte and Queenscliff beaches have been flagged red by Environment NSW as “likely” to be polluted.

Swimmers were also told to monitor the conditions for “discoloured water and floating debris” at dozens of beaches along the NSW east coast which have been flagged as “possibly” polluted.

A spokesperson for the government’s beach pollution Beachwater website said pollution was expected to linger across the city’s waterways for a number of days.

“We are receiving reports of discoloured water at many city beaches,” she said.

“It’s usually recommended that swimmers keep out of the water for one day after the last rainfall at ocean beaches and for up to three days at swimming sites in estuaries to allow the conditions to return to normal.

“However, given the scale of the event the dangers could linger for longer, noting that floodwaters are still making their way through river systems, swimming should be avoided for as long as stormwater is present.” 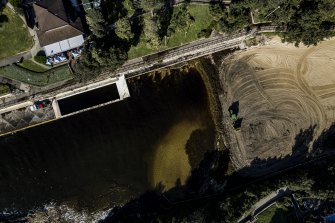 A number of Sydney’s beaches, such as Clovelly, have gone brown as a result of the heavy rainfall. Credit:Brook Mitchell

University of NSW water expert Stuart Khan said given polluted water can potentially cause eye, ear and skin infections – as well as gastro – it would be worth waiting until the pollution flushed out to sea.

He said Queenscliff, Tamarama and Coogee were most affected due to their proximity to stormwater pipes and their sheltered nature, which reduces the flow of water.

“This has been a really extreme event, so there will still be stormwater running off for a number of days,” he said.

“I would play it much more cautiously than usual.”

Mr Khan also said the current level of faecal matter at Sydney’s beaches put people at a greater risk of hepatitis A.

The level of faecal contamination within water is determined by the amount of colony-forming units (cfu) of the bacteria enterococci per 100 millilitres of water.

The NSW department of education and heritage states any level above 500 presents “a significant risk of high levels of illness transmission”.

A Waverley Council spokeswoman said all beaches within their area had been impacted by pollution due to the local stormwater network.

Due to heavy seas, Bronte Pool was also unable to be cleaned on Friday and has since remained closed.

“It is likely that it will be a number of days until the water at our beaches is no longer discoloured and has no floating debris, so caution is advised before swimming,” she said. 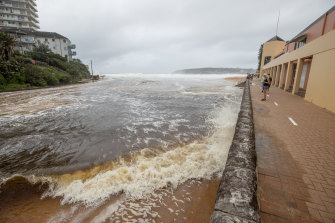 Sydney’s most popular beaches, such as Queenscliff, have been left polluted due to recent rainfalls.Credit:Getty

Forecasting this week’s weather conditions, Bureau of Meteorology engagement officer Morgan Pumpa said Sydney was in for another week of rain.

A ridge of high pressure extending off the coast means Sydney can expect up to 2mm of rain each day until Sunday.

It won’t be until next week that Sydneysiders can expect some sunshine.

“It’s going to be pretty similar each day this week,” Ms Pumpa said.

“We will see partly cloudy days and showers of just a couple of millimetres of rain. Then we should start to see the change during the end of the week.”