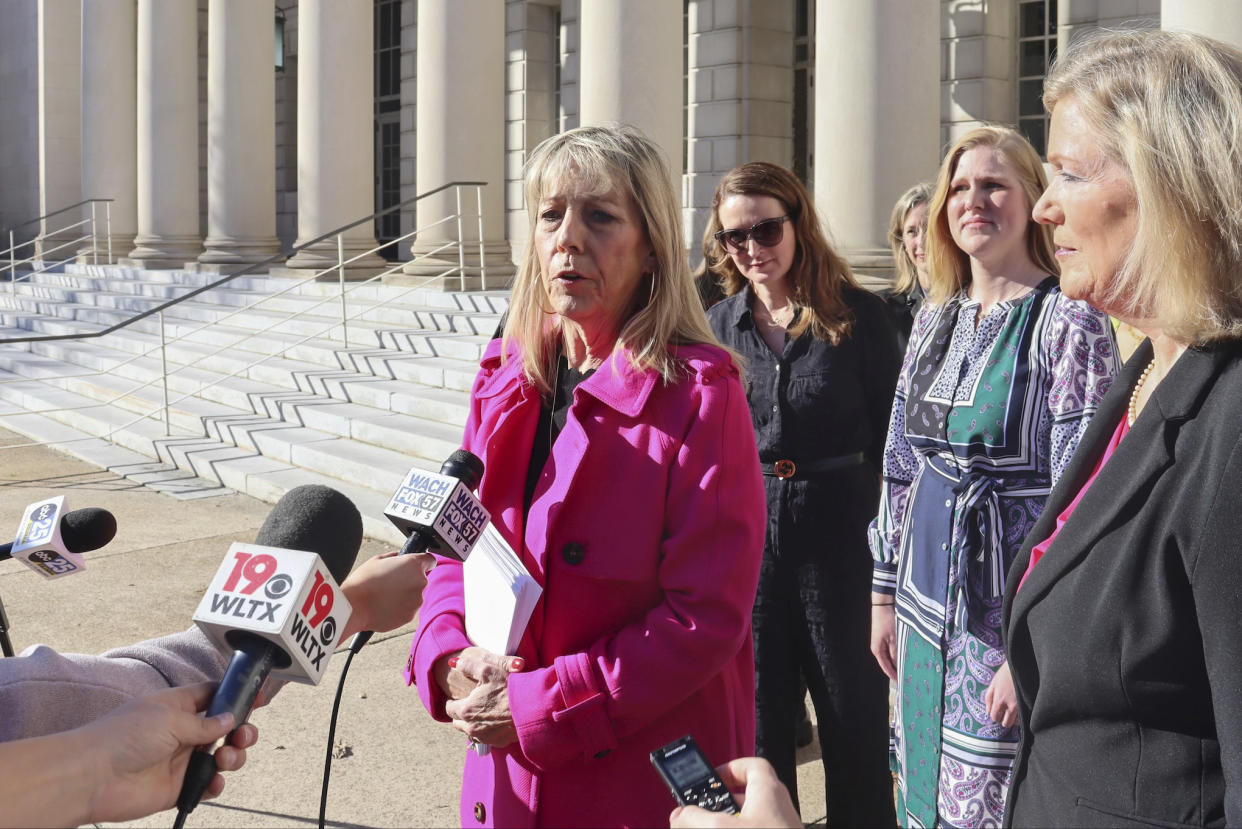 COLUMBIA, S.C. (AP) — The South Carolina Supreme Court on Thursday struck down a ban on abortion after six weeks, ruling the restriction enacted by the Deep South state violates a state constitutional right to privacy.

The decision marked a significant victory for abortion rights' advocates suddenly forced to find safeguards at the state level after the U.S. Supreme Court overturned Roe v. Wade in June.

With federal abortion protections gone, Planned Parenthood South Atlantic sued in July under the South Carolina constitution’s right to privacy. Restrictions in other states are also facing challenges, some as a matter of religious freedom.

But since the high court's momentous decision in Dobbs v. Jackson Women's Health Organization, no state court until Thursday in South Carolina had ruled definitively whether a constitutional right to privacy — a right not explicitly enumerated in the U.S. Constitution — extends to abortion.

“Planned Parenthood will keep working day by day and state by state to safeguard that right for all people,” said Alexis McGill Johnson, president of Planned Parenthood Federation of America, in a statement after the ruling.

The 3-2 decision comes nearly two years after Republican Gov. Henry McMaster signed the restriction into law, banning abortions after cardiac activity is detected. The ban, which included exceptions for pregnancies by rape or incest or pregnancies that endanger the patient’s life, drew lawsuits almost immediately. 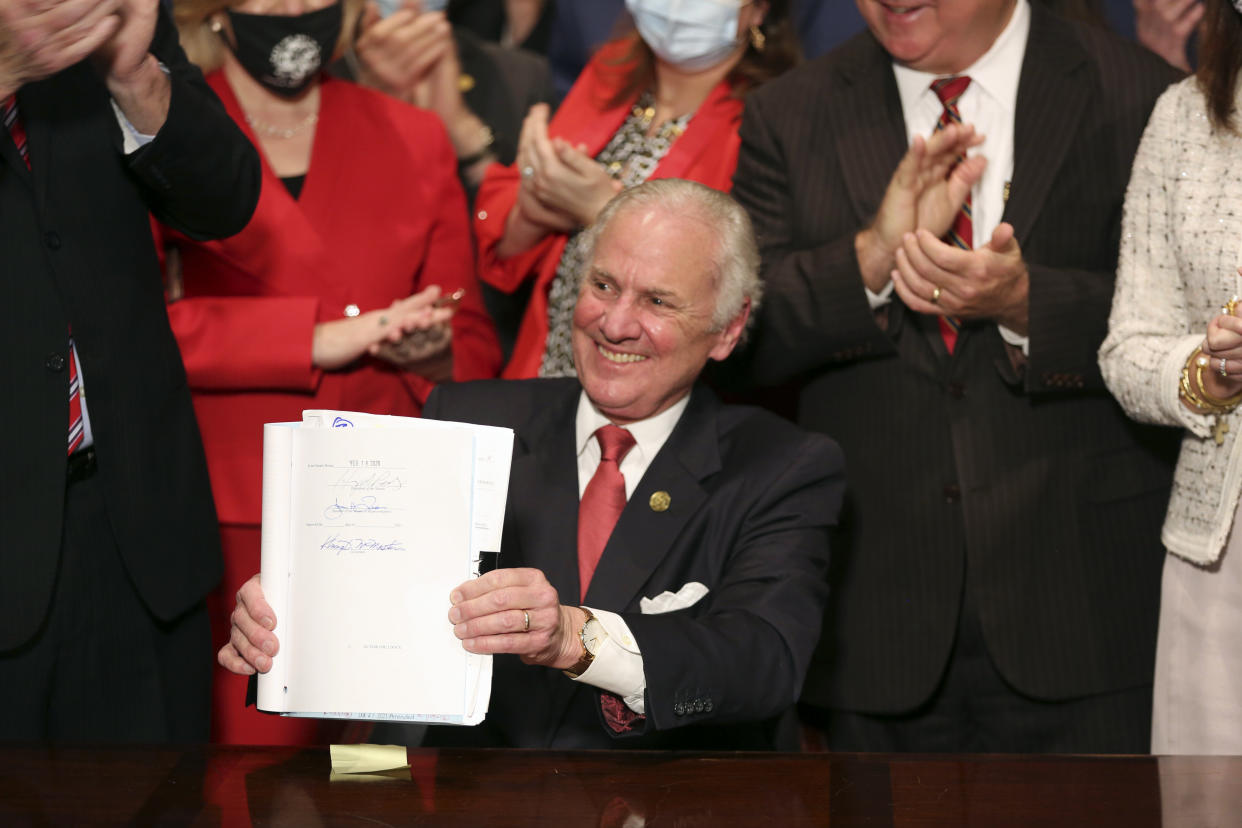 Justice Kaye Hearn, writing for the majority, said the state “unquestionably" has the authority to limit the right of privacy that protects from state interference with the decision to get an abortion. But she added any limitation must afford sufficient time to determine one is pregnant and take “reasonable steps" if she chooses to terminate that pregnancy.

“Six weeks is, quite simply, not a reasonable period of time for these two things to occur," Hearn added.

Currently, South Carolina bars most abortions at about 20 weeks beyond fertilization, or the gestational age of 22 weeks.

Six weeks is, quite simply, not a reasonable period of time for these two things to occur.Justice Kaye Hearn

“Women should be able to make their own decisions about their bodies,” Jean-Pierre added.

Varying orders have given both the law’s supporters and opponents cause for celebration and dismay. Those seeking abortions in the state have seen the legal window expand to the previous limit of 20 weeks before returning to the latest restrictions and back again.

Federal courts had previously suspended the law. But the U.S. Supreme Court’s June decision allowed the restrictions to take hold — briefly. Then the state Supreme Court temporarily blocked it this past August as the justices considered a new challenge.

Multiple justices emphasized that Thursday's ruling confronted only legal questions and rejected the political aspects of the debate.

The justices’ limited ruling left the door open for future changes. The state House and Senate failed to agree last summer on additional restrictions during a special session on abortion. Still, a small but growing group of conservative lawmakers have vowed to push that envelope once more this legislative session — despite some Republican leaders’ previous insistence no agreement is possible.

In a statement to The Associated Press, South Carolina Democratic Party Chairman Trav Robertson applauded the ruling as amounting to “a voice of reason and sanity to temper the Republicans' legislative actions to strip rights away from women and doctors.”

With this opinion, the Court has clearly exceeded its authority.S.C. Gov. Henry McMaster

Republicans, led by the governor, vowed Thursday to press forward with new attempts at restrictions. McMaster, who is soon to be inaugurated to his final full term, indicated a new abortion measure will be a priority when the legislature reconvenes next week.

“With this opinion, the Court has clearly exceeded its authority,” McMaster’s statement said. “The people have spoken through their elected representatives multiple times on this issue. I look forward to working with the General Assembly to correct this error.”

Republican South Carolina House Speaker G. Murrell Smith, Jr., tweeted that the state justices created "a constitutional right to an abortion where none exists.” Smith echoed Justice Kittredge in adding the decision failed to respect the separation of powers.

In a dissenting opinion, Kittredge warned against letting the judicial branch resolve what he said is a “policy dispute.”

This is a monumental victory in the movement to protect legal abortion in the South.Planned Parenthood South Atlantic President Jenny Black

Abortion access advocates on Thursday doubled down on their opposition to any new restrictions in anticipation of further legislative debate.

And standing shoulder-to-shoulder outside the Palmetto State’s high court on Thursday afternoon, advocacy groups celebrated what they called a “mandate."