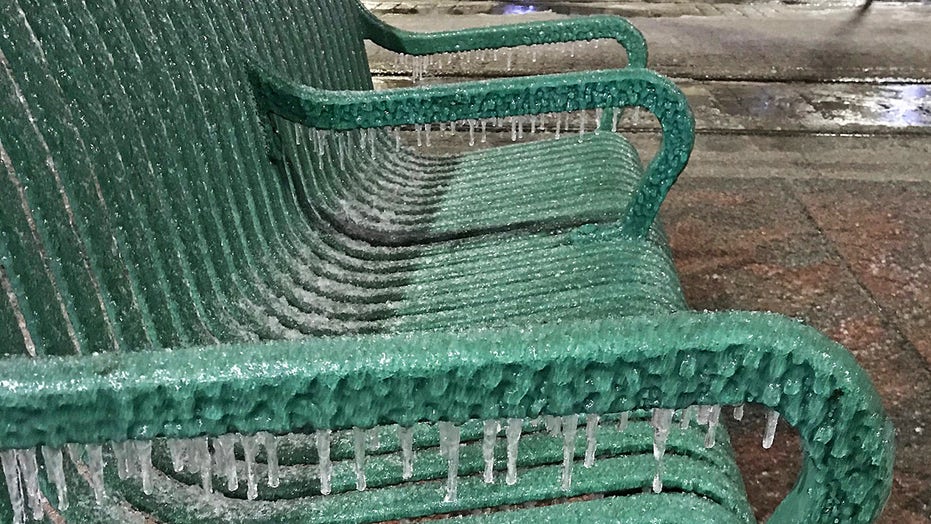 A polar vortex around the U.S.-Canadian border is the cause of the extreme weather in the Lonestar State, resulting in frigid temperatures farther south than usual.

Areas from Texas to the Mid-Atlantic have felt the impact of the storm system, experiencing freezing rain, sleet and snow through the end of the week.

The outlet noted that a central reason for the power outages is ice build-up on older trees near power lines and a video captured by a TikTok user showed multiple icy branches suddenly crashing to the ground.

The surrounding area saw around a quarter-inch of ice, The Weather Channel reported on Friday.

The system extended to southern New Jersey, knocking out power for tens of thousands in Kentucky and West Virginia as well.

Kentucky — which had declared a state of emergency and closed COVID-19 vaccination sites — saw up to a half-inch of ice accumulation and trees in Oklahoma amassed a quarter-inch of ice.

In Tennessee, flights were delayed on Thursday at Memphis International Airport due to both snow and “thunder ice,” and Indiana schools and government offices shuttered.

Freezing rain and snow are forecast to continue through next week, and the National Weather Service reported Friday that dangerous sub-zero temperatures will continue throughout much of the country.

“In fact, much of the central U.S. from the Dakotas to Texas could witness many broken daily record low max temperatures through the upcoming weekend,” the agency predicted.

“The expansive dome of sub-freezing temperatures across the northern tier of the country has laid the foundation for winter storms to wreak havoc from coast-to-coast not only going into this weekend, but also into next week,” it said.

Fox News’ Janice Dean reported Friday that Texas and much of the Southern Plains will see heavy snow, blizzard conditions and the coldest air in decades.

While the Northwest, Central U.S. and Plains tackle icier conditions with snowfall this weekend, the Gulf Coast and Southeast will be soaked with rain showers and the Mid-Atlantic and East Coast will be hit by a wintry mix.