Two England fans dressed as Crusaders told yesterday how security officers marched them from the stadium before making them strip naked as a ‘ritual humiliation’.

The Three Lions supporters said officers were ‘bullying and vindictive’ after confiscating their novelty swords, chainmail and helmets emblazoned with the cross of St George, and asking them: ‘Are you here to kill Muslims?’

Fifa insisted the pair had been turned away from the Khalifa International Stadium in Doha where England played Iran for being ‘offensive to Muslims’.

But the expat Britons, who live in Qatar, and whom the Mail is not naming to protect them from reprisals in the hardline Islamic state, told a more chilling version yesterday. 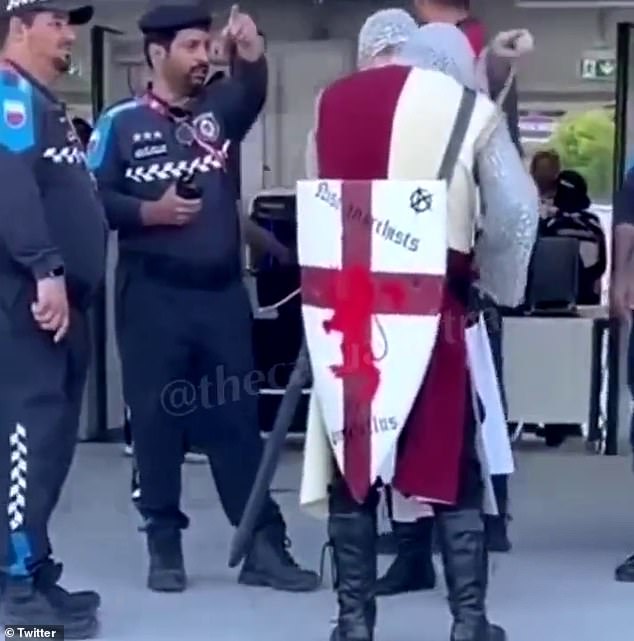 One of the pair, a 57-year-old engineer, said: ‘We are both huge fans of Monty Python and the Holy Grail and had our costumes hand made in India – they’re brilliant and cost £3,000 each.

But the staff at the security checkpoints first denied us entry because of our helmets, then they said the shields and rubber swords were a problem, then the tunics were offensive.

‘This went on for two-and-a-half hours and led to us missing the first half so we decided to ditch all the gear as we’d paid more than £180 for tickets.

‘But as we tried to get in we were taken into a room and told to strip naked. They didn’t even search us – and it was just ritual humiliation.’

Both the men have been living in Qatar and helping to build the stadiums.

Kick It Out, the anti-discrimination charity, warns that ‘knights or crusaders’ may not be a laughing matter at this World Cup.

Researcher Robert Carter has tweeted: ‘The attire, complete with swords and crosses, is offensive due to crusader history of rape, slaughter and occupation of Arab lands.’