Eric Carle, the beloved children’s author and illustrator whose classic The Very Hungry Caterpillar and other works gave millions of kids some of their earliest and most cherished literary memories, has died at age 91.

Carle’s family says he died Sunday at his summer studio in Northampton, Massachusetts, with family members at his side.

Through books like Brown Bear, Brown Bear, What Do You See?; Do You Want to Be My Friend?; and From Head to Toe, Carle introduced universal themes in simple words and bright colors. 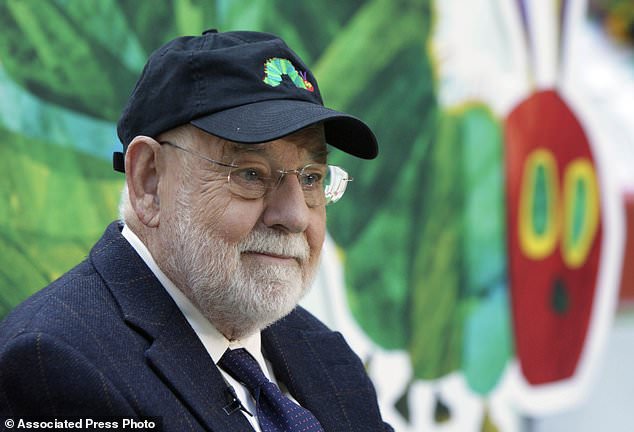 Author Eric Carle reads his classic children’s book The Very Hungry Caterpillar on the NBC TODAY television program in New York on October 8, 2009, as part of Jumpstart’s 4th annual National Read for the Record Day. Carle died at the age of 91 at his home in Northampton, Massachusetts on Sunday. 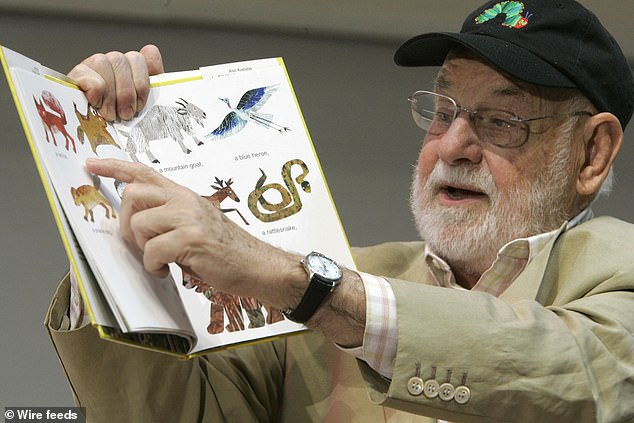 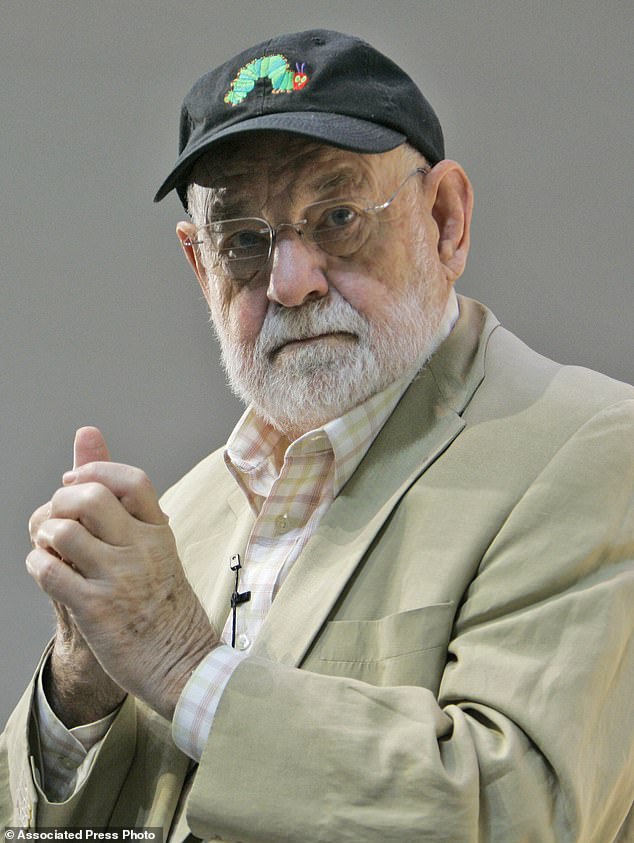 Carle’s son, Rolf, said that his father died of kidney failure. Carle is  seen above in October 2007 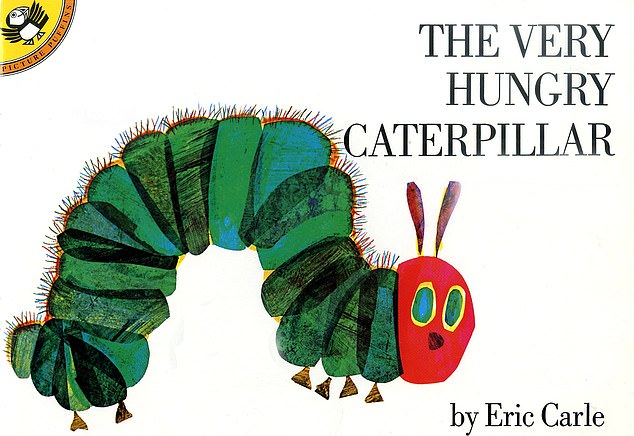 The Very Hungry Caterpillar, published in 1969, was welcomed by parents and delighted kids with its story of the metamorphosis of a green and red caterpillar with a touch of blue and brown to a proudly multi-colored butterfly 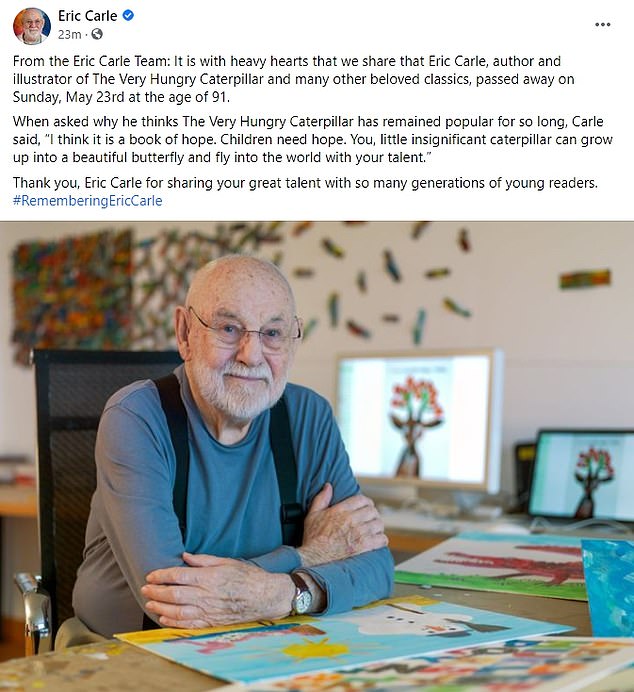 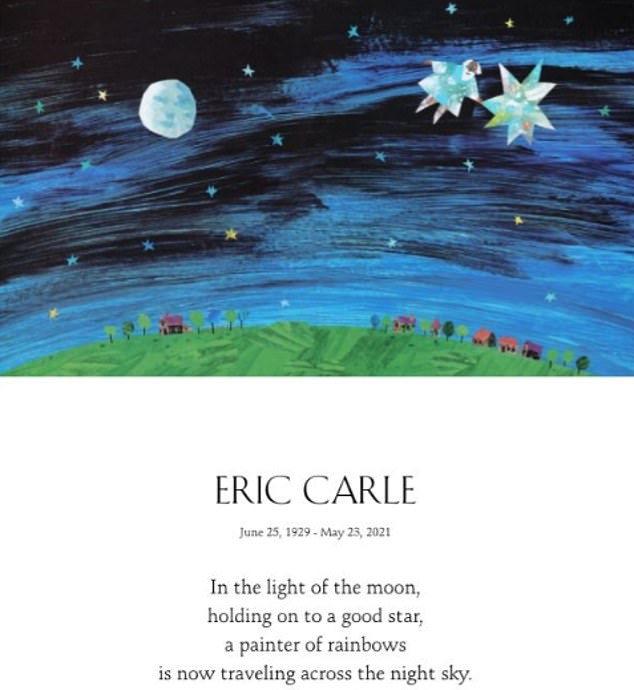 The family’s announcement was issued by Penguin Young Leaders

‘The unknown often brings fear with it,’ he once observed.

‘In my books I try to counteract this fear, to replace it with a positive message. I believe that children are naturally creative and eager to learn. I want to show them that learning is really both fascinating and fun.’

The Very Hungry Caterpillar, published in 1969, was welcomed by parents and delighted kids with its story of the metamorphosis of a green and red caterpillar with a touch of blue and brown to a proudly multi-colored butterfly.

Originally conceived as a book about a bookworm – called A Week with Willi the Worm – the hero, who eats through 26 different foods, was changed to a caterpillar on the advice of his editor.

It has sold some 40 million copies and has been translated into 60 languages, spawned stuffed animal caterpillars and has been turned into a stage play.

‘I remember that as a child, I always felt I would never grow up and be big and articulate and intelligent,’ Carle told The New York Times in 1994. “Caterpillar is a book of hope: you, too, can grow up and grow wings.’

Politicians like George W. Bush and Hillary Clinton were known to read the book to children on the campaign trail.

The American Academy of Pediatrics sent more than 17,000 pediatricians special copies of the book, along with growth charts and parent handouts on healthy eating.

Fellow writer and illustrator Ted Dewan called the book one of the pillars of children’s culture.

‘It’s almost talking about how great the Beatles were. It´s beyond reproach,’ he said.

Carle wrote and-or illustrated more than 75 books, sometimes partnering with Bill Martin Jr. or other authors, but most with Carle working alone.

One of his last books was 2015’s The Nonsense Show, which centered on a parade of flying fish, cat-taming mice and circus animals.

Born to German immigrant parents in Syracuse, New York, Carle and his family returned to Germany – Nazi Germany, at the time – when he was 6.

Under the Nazis, modern, expressionistic and abstract art was banned and only realistic and naturalistic art was permitted.

When Carle was 12 or 13, a high school art teacher would change his life by inviting him to his home, where he secretly showed his expressionist art, including Franz Marc’s Blue Horse.

‘I was used to pretty paintings with a mountain in the background. Although I was shocked, I always carried that day in my heart,’ Carle told NPR in 2011.

As an illustrator, he said he chose to portray animals in unconventional colors to show his young readers that in art, there is no wrong color.

He thanked Marc in the pages of The Artist Who Painted a Blue Horse.

His signature illustration technique was done by piecing pictures together chiefly from tissue paper that he had painted with various colors and textures.

‘It sounds corny, but I think I connect with the child in me, and I think others do, too,’ he told The Associated Press in 2003.

His father introduced him to the wonders of the living creatures that he would later immortalize in his books.

‘When I was a small child, as far back as I can remember, he would take me by the hand and we would go out in nature,’ he told The New York Times in 1994.

‘And he would show me worms and bugs and bees and ants and explain their lives to me. It was a very loving relationship.’

The theme of kids mastering the world was tackled in other tales of critters with ‘very’ big predicaments: The Very Busy Spider, The Very Quiet Cricket, The Very Lonely Firefly, and Friends.

The love of family was explored in such books as Papa, Please Get the Moon for Me, 1986; and Does a Kangaroo Have a Mother, Too? from 2000.

After graduating from a leading German art school, he returned to the United States in 1952.

He worked as a graphic designer in the promotion department of The New York Times before switching to advertising.

It was Martin who spotted Carle’s talents and brought him into the publishing field.

Carle was working as an art director for an advertising agency at the time; Martin had just written Brown Bear, Brown Bear, What Do You See? and needed an illustrator.

‘While waiting for a dentist appointment, I came across an ad he had done that featured a Maine lobster,’ Martin, who died in 2004, told the AP in 2003.

‘The art was so striking that I knew instantly that I had found my artist!’

The book, which introduces colors and animals to young readers, came out in 1967 and became a perennial bestseller.

Based in Amherst, Massachusetts, the nonprofit, 40,000-square-foot arts center is a showcase for picture book illustrations from around the world.

He received lifetime achievement awards from the National Endowment for the Arts and the American Library Association.

He is survived by a son and a daughter.